Phisohex - A Green Bottle at Every Sink 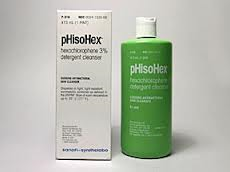 This stuff was everywhere in old time hospitals - every sink and every horizontal surface near a sink held  a bottle of this microorganism murdering miracle. It delivered a one/ two punch by disrupting bacteria cell membranes and precipitating intracellular  protein. In the operating room we had gigantic shaped dispensers that looked like a mini-funnel cloud. The miraculous white soap was forced out of the dispenser by pneumatic pressure supplied by a squishy black foot pump. Stomping on the footpump always felt kind of slippery to me and reminded me of tromping on dog waste. Sometimes, I even reflexively checked the soles  my foot covers to make sure they were free of stinking dog poop.

Miss Bruiser, my favorite instructor from nursing school even managed to incorporate the operating room foot operated Phisohex dispenser with  her teaching technique. Miss Bruised was obsessed with fingernails being  their correct length (1 mm.) and having the subungal space (the area underneath the distal nail) aggressively scratched out with a metal file before scrubbing for a case. After the mandatory 10 minute scrub if she suspected we neglected the subungal scraping, she would jump with all her might on the Phisohex foot pump blasting our hands with a surprise bolus of Phisohex. "It's time to start all over and don't forget the subungal curettage this time" she admonished with a nasty smirk.

Phisohex contained 3% hexalchlorophene  and one of the raw ingredients was fomaldehyde, which always made me question how such a toxic substance was safe. In the early 1970's some studies suggested that Phisohex could be a neurotoxin, especially with newborns. This was puzzling to me because Phisohex was used extensively in the nursery. Why was it being used with a population that research suggested was particularly at risk?

Once a product like Phisohex attains such widespread use a sort of inertia develops and some crazy applications manage to evolve. Pre-op showers with Phisohex and pre-op surgical site scrubs were common and then upon arrival in the OR proper the standard prep was another Phisohex scrub followed up with a final coating of Zepharin. In urology, it was common to administer a dilute Phisohex retention enema before prostate biopsies. I could never decipher the rationale behind this (pardon my lame pun) because most of the bowel bacteria were gram negative and Phisohex was most active against gram positive microorganisms like strep and staph.

Even the cafeteria smelled of Phisohex. It was just  as common as Whip 'N Chill desert and those yucky scrambled eggs made from dried egg powder. There was nothing to wake one up as quickly as a plate of reconstituted dried powder scrambled eggs and a snoot full of that Phisohex odor.  I learned from one of the cooks cafeteria workers that their automatic dish washing machine actually gave the dishes a spray of Phisohex prior to the rinse cycle.  Compared to the cafeteria smells, even Bovie smoke smelled OK. Everything is relative including noxious smells.

Around 1970 or so studies began showing that Phisohex at the 3% level was indeed a neurotoxin and there were also suggestions that in high exposure to personnel like nurses it could be a teratogen.
I guess it was no coincidence that a colleague had a baby whose face resembled the dispensing head on a Phisohex bottle. I am also wondering if I can blame my cognitive decline on heavy duty exposure to Phisohex. When I was a youngster I could spell just about anything without even thinking. Residents even asked me how to spell operative terms and I rarely let them down. Now when I type those nasty little red squiggly lines pop up constantly and I'll be darned if I can remember what I had for lunch. It must have been the Phisohex.
Posted by Oldfoolrn at 6:34 PM