CircoLectric Beds Go Round and Round

CircoLectric beds were unique devices that were the hospital bed equivalent of a BMW   Z4  sports car. They looked exotic, were expensive, moved, and were not real practical. The bed consisted of 2 large hoops about 7  feet in diameter with a horizontal surface through the middle of the parallel hoops. The entire assembly was mounted on rubber belt driven rollers that rotated the bed via an electric motor in the base. The horizontal surface was the mattress that the patient reclined on in the supine position. A stretcher-like device was attached when rotating the patient into the prone position. The mattress could then be lifted up and out of the way when the patient was face down. This completely prone position which was unobtainable with a regular hospital bed was especially good for decubitus ulcer care.

The bed was designed for patients with a spinal cord injury and the thinking was to gradually acclimate the patient to position changes without causing problems with their fragile autonomic nervous system. The bed really worked well to immobilize and prevent lateral spinal movement, but the forces of gravity and difficulty maintaining traction while the bed was changing position lessened it's use with these patients. 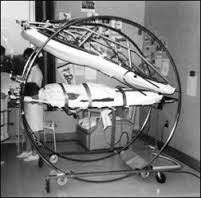 Our hospital began using CircoLectric beds in the early 1970's to care for patients that had a Cloward cervical spine procedure. This  involved taking a bone form the hip to make a dowel to stabilize and fuse the vertebra. The thinking was that a period of 10 days or so in the Circolectric bed would facilitate healing and also keep pressure off the hip graft site.  There was little science to support this and after awhile the use of Circolectric beds for this was abandoned. It takes months for bone grafts to fuse and 10 days in the Circolectric bed made little difference

Dr. Ralph Cloward, the inventor of this procedure is said to have done 44 crainiotomies over the course of 4 days during wartime. Just thinking about his scrub nurse loading all those Raney Clips makes my fingers ache.

Patients really hated these beds. Before turning, the patients were tightly sandwiched between the top and bottom frames which caused claustrophobia. In the prone position only the floor would be visible. We tried to position diversions under the bed for the patient, but those old tube TVs were to large. We did come up with a radio with extended handles for the patient to control it.

I did care for a very good natured quadriplegic, Cecil, that had a certain fondness for his Circolecric bed. He used it whenever a pressure sore began to develop. He had an old tape cassette deck that blasted the Diana Ross song "Upside Down" whenever we turned him. I even remember some of the words:

I said upside down
You're turning me
Upside down

Boy, you turn me inside out
and round and round

Boy you turn me

He used to laugh and ask us to dance to this song whenever we turned him. I could never understand how someone with such a severe disability could be so joyful. There is a lesson somewhere there and I think about Cecil often.

The Circolectric bed had a trapdoor in the lower mattress for elimination puposes which had a spring loaded holder for a bedpan. I worked with a nurse from rural Iowa that came up with a great use for an obsolete Circolectric bed. As a prank, youngsters on the farms would tip over an occupied out house. Her idea was to strap the pranksters to a Circolectric bed and when they started to eliminate, turn the bed. Sort of the old eye for an eye type of justice. I imagine there plenty of these beds jammed into a warehouse somewhere just waiting to be repurposed by the juvenile justice systems of rural America.
Posted by Oldfoolrn at 6:43 PM