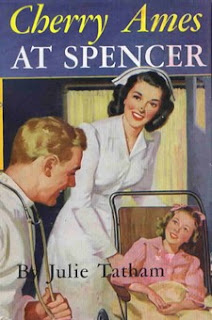 Cherry Ames, the idyllic character of old time nursing novels led a charmed life. Her adventures always involved handsome doctors and wealthy patients that she so artfully cared for. As every experienced nurse comes to know, not all doctors are Prince Charming and some experiences in nursing really are the stuff of nightmares. It is reasonable to conclude that Cherry probably had some bad dreams and here is some fodder that may have contributed to her restless night's sleep.

Weighted speculums used in gyne surgeries could send shivers down anyone's spine. Using such brute force on such  sensitive and delicate anatomy is like using a brick to break into your house when you can't find your keys. Don't drop one of these substantial instruments on your foot or you will have a fractured metatarsal to go along with that nightmare. To complete the unsavory image just imagine the waterfall like cascade of blood and drainage down the center of this thing during a procedure. (That's the purpose of the  vertical  channel running from the blade through ball shaped weight.) Cherry better not forget to carefully position a kick bucket under this thing or she will have a real mess on her hands when the case is finished.  I am certain this instrument was invented by a man.

Males don't escape the reproductive organ nightmares. The meatotomy done prior to a TUR always gave me goosebumps. That cold steel slicing right through the tip of a penis is real nightmare material. If the anesthesia is light, the circulating nurse better be available if the patient moves around.

Chest tube insertions on a conscious patient always brought to mind some sort of  Samurai Swordsman ritual. That huge trocar with that golf ball sized handle to thrust the thing into someone's chest probably gave Cherry the creeps too. I don't recall if there was a Cherry Ames, Thoracic Nurse novel. I bet she conveniently deleted the chest tube insertion procedure from her book, but things like this can come back to haunt you in the middle of the night. Yikes!

Cleaning up an OR late at night (more likely very early in the morning) after a failed trauma surgery. No housekeeping (environmental services for you whippersnapperrn's)  on duty so Cherry and her fellow scrub nurse must shoulder the unpleasant details.  Cherry cheerfully draws straws with her nurse colleague using discarded suture material to determine who gets to clean the equipment and who gets to do post mortem care on the body. Don't forget to mop up that bloody, bone chip slurry from the floor. Now it's off to dreamland. Try and not scream to loud when that nightmare wakes you up.

Finally, Cherry probably had some unpleasant dreams about administering Lactulose enemas to patients in hepatic failure. It was no problem positioning the patient on their side, that ascetic abdomen acted as ballast pulling them over. The sweet sickening smell of that Lactulose combined with foul stool is not something to be forgotten. A type of hospital version of sweet and sour sauce. Bonus nightmare potential if there is an accompanying GI bleed.  I wonder if Cherry experienced olfactory sensations in her bad dreams?

During the first week of nursing school an informal poll revealed that all 76 of us had read Cherry Ames books at one time or another. A real marketing accomplishment for the publisher. We soon realized that real nursing was pretty much the opposite of Cherry's experiences. In pediatrics we always chided one another "I bet Cherry never made a little kid like that cry and scream after an injection." The remarks persisted into other rotations.

I always suspected there was a hidden side to Cherry. After all, in Jungle Nurse she got involved with an international smuggling ring. Her constant travelling and job hopping made it appear as though she was running from something. Why was there no RN after her name? Had a state board revoked her license? Did she even pass boards? Lots of unanswered questions, but I suspect she really did have some nasty nightmares.
Posted by Oldfoolrn at 6:50 PM 4 comments:

Down a Quart? Hypodermoclysis to the Rescue

Poor skin turgor? Coated tongue? Urinary output down? No need for blood and/or urine osmols and you can forget about getting ADH levels, diagnosis of dehydration was based on well known physical signs.  You know it when you see it.

Usually there was some issue compromising oral fluid intake. A quick, easy way to get a liter of fluid on board was hypodermoclysis which was seen as a bridge to adequate oral fluid intake. Very few patients had an IV line in place.  The equipment included a 1000cc bottle of 0.9% saline and tubing which diverged into 2 tubes via a Y shaped bifurcation about 18 inches below the bottle. The two tubes were about 36 inches long and were connected to a 2 inch 20ga. needle.

The liter of fluid was hung from an IV pole or even attached to the traction frame of an ortho bed. The 2 inch needles were inserted very shallow and parallel to the skin of the anterior thigh with one needle per thigh. As a young whippersnapperrn, I asked an experienced nurse, "Why do we have to use such long needles for this?" The answer was "The fluid leaks out with short needles." Being the free spirit that I am, I once tried 1 1/2 inch  needles and it worked just fine. Somehow, those 2 inch needles looked inhumane to me. Similar to those EKG needle electrodes that used to creep me out when sticking a patient with them.

After the needles were in place, the fluid was allowed to flow in without any clamps or regulation. This usually took about 3-4 hours. Old hospital rooms really did not have room for equipment like IV pumps or controllers which is a moot point as they were not yet invented.

One criticism I've heard of clysis is that it dumps liquid into an inappropriate fluid compartment (interstitial)  and this renders it ineffective. When patients were badly dehydrated, they seemed to absorb subcutaneous fluids well.  It did seem to work on a short term basis. Often a clysis would perk a patient up enough to begin taking oral fluids. Another advantage was since the needle insertion site was further from the patients hands, it was less likely to be pulled out.  Since a hypodermoclysis site did not need observed closely like an IV site it could be covered with a dressing to prevent patient tampering.

Clysis was a rather crude way of replacing fluids that certainly had limitations, but, amazingly usually worked fairly well.
Posted by Oldfoolrn at 6:33 PM 6 comments: