Blowing Smoke to "Settle Your Nerves"

It's one of those rare occasions when it's time to sequester my foolishness to the back burner as I offer some time worn proven measures to help patients experiencing difficulty swallowing.  Long term endotracheal intubation,  TPN,   and neuro problems all invite dysphagia.

Position the patient upright and check for a gag reflex or at least some indication of an intact airway protective response. The famous ramrodding a patients posterior pharynx with a tongue depressor is not what I had in mind. The gagging and retching elicited by this cruel trick does not necessarily indicate a protective response against aspiration. A kinder, gentler  method of assessment involves asking the patient to say "Ahhh"  and observing if the uvula and posterior pharynx retract. I have also been told that an intact blink reflex indicates an intact gag reflex because the same nerves are involved. Cross over of neural impulses makes me hesitant to trust eye blinks as an indicator of airway protection.

Caution is the key so don't even think about injecting fluids into a patient's mouth with an Asepto or using drinking straws. The suction applied to a straw to permit atmospheric pressure to propel the liquid into the mouth can compromise airway protective reflexes. The act of applying suction can impede the transition to an airway protecting response.

Drinking from a glass replicates a familiar experience for the patient, but hyperextending the neck by tilting the head back to drink opens up the airway. The epiglottis is repositioned from closing the trachea-something to be avoided at all cost.

The secret to keeping the epiglottis positioned over the trachea when swallowing from a glass is to keep the chin level or even slightly tucked down. How do you raise the glass to drink without tilting your head back? All it takes is a few snips of your trusty bandage scissors to create an aspiration resistant drinking device.

Cut a nose clearance notch in the side of a paper cup and you can drink without tilting your head back maintaining the airway. Just drink from the side opposite the open notch and as the cup is tilted up to take a sip the opening accommodates the protuberating nose. The mandible remains level and the epiglottis remains intact covering the trachea.

Email ThisBlogThis!Share to TwitterShare to FacebookShare to Pinterest
Labels: Procedures 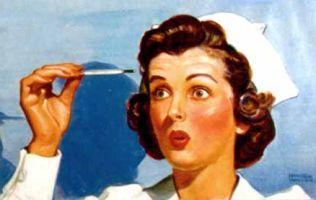 Venerable, old nurses were taught that fevers were a destructive response that required immediate intervention to bring the body temperature back to that magic number of 98.6F or 37C. Since there were few real cures for much of anything back in the good old days, rigid authoritarian protocols, whether they worked or not, were established to control the chaotic world of febrile hospitalized patients.

Temperatures of all patients on the ward were routinely checked first thing in the morning with glass mercury  thermometers. We had one complete class session on the proper way of shaking thermometers down.  It's all in the wrist snap.  Fevers did not follow a rigid time  schedule and could spike rapidly just about any time of the day or night. It was easy to miss fevers with routine schedules because they could rise and fall with reckless abandon within a very brief time frame.

Protocol called for cultures for temperatures over 101F even if the cause was suspected to be neurologic and their was no sign of sepsis. Fevers climbing to that dreaded 102F threshold triggered a series of unpleasant and down right miserable interventions for suffering patients. Denial exists on both sides of the bedside rail and lots of compassionate nurses reported thermometer readings of 101.8 to put a halt or delay to some of the more miserable interventions to drop temperatures. Hyporeportinosis in it's finest glory. 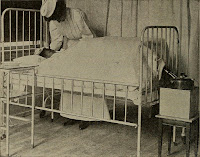 This illustration shows the fight fire with fire fever treatment. That's a teapot propped up on the stand at the foot of the bed. The steam cools as it infiltrates the tented sheets and the nurse is applying ice packs to the patient's head. The thinking (if you could even call it that) behind the steam bath was that it opened pores and promoted a profuse diaphoretic response. From the patient's perspective, I suspect it felt like receiving a hot foot while having your head stuffed in a freezer. Miss Bruiser, my favorite nursing instructor had many tales about patients in steam baths; none of them pleasant. I don't think she ever had a temperature reported as 101.8.

Alcohol sponge baths were another weapon in the armamentarium to battle fevers. Equal parts of water and 70% isopropyl alcohol were combined in a bath basin. After placing axillary and groin icepacks the nurse swabbed the patient's entire body with the alcohol laced cooling solution. The shivering induced by the strategically place ice packs  was bad enough, but the fumes from the evaporative  cooling action of isopropyl alcohol was even worse. I'm certain the shivering and hacking cough produced enough muscular activity to counteract any of the cooling attempts. Some old nurses replicated the experience of greenhouse workers by borrowing misting bottles from housekeeping and spritzing the febrile patient with a toxic mist of alcohol and water.

Introducing ice water into just about any available orifice was another hoary nursing intervention favored by those practitioners with a masochistic vein. Nasogastric tubes were swiftly passed and flooded with boluses of ice water. Miss Bruiser would rest her oversized meat hook of a hand on the patient's epigastrum as the frigid water infused and arrogantly nod her head, "Ahh..he feels cooler already." It was always a mystery to me how she could feel past the barrier of the stomach wall, abdominal muscles, fat, and skin, but it was never prudent to question Miss Bruiser or her whacky methods.

Just about any ailment had a specific enema treatment and fevers were no exception. Febrile patients were subjected to backside buffoonery that entailed ice water enematizations. This approach from the rear did seem to reduce fevers, but I always suspected it was limited to the localized cooling of sphincter muscles when temperatures were measured with rectal temperatures. I always had the notion if Miss Bruiser could catch a glimpse of the patient's misery filled facial response to this frigid intrusion that she would temper or soften her approach to patients. Fat chance of this occurring, Miss Bruiser's field of view was limited to the icy enema tip and it's intended target.

Asking questions of old time nurses about the science behind their crude interventions could land an innocent student in a heap of trouble. Fever interventions were largely based on empirical notions and asking to see supporting data was seen as an indirect way of telling the person they really did not know what they were doing. Both parties full well knew there was no science to support their dubious activities and asking for the data when there was obviously none, was seen as rubbing salt in the wound.
Posted by Oldfoolrn at 6:42 PM 4 comments:

"Here is your daily allotment of gloves. Use them judiciously and I better not here about one shift hogging them - remember they have to last 24 hours."

This was the warning issued by one of those stern nursing supervisors as she reluctantly surrendered a box of one size fits all gloves. A box of 24 latex (nobody was allergic to this substance in the good old days) gloves was supposed to suffice for three busy wards inhabited to the gills with patients vomiting, excreting, and  oozing every bodily fluid known to mankind. At least these fluids were organic, the Cidex based cleaning solutions we used on hospital equipment would make unprotected skin boil and bubble up like a dousing with boiling water. We always tried to handle cleaning solution soaked rags with forceps, but sometimes the volatile fumes were enough to accelerate skin lesions. Nasty stuff indeed and don't dare get caught wearing a precious glove on an ordinary cleaning mission.

Old school nurses eschewed gloves for reasons other than the negative impact such extravagant expenditures had on hospital budgets. Nursing was a hands on affair and this meant bare hands  with skin to skin contact. Gloves imposed an unnatural barrier and were viewed as an offense to the patient.

I was conditioned like Pavlov's dogs when I had gloves on. This was just not right and my shoulders hunched over with a strong sense of self consciousness. Even when using gloves appropriately, I was anticipating that cranky old nursing supervisor in the background  hollering and belittling me.

Finger cots came from the supplier in boxes and were clean (hopefully) but unsterile. Sterile finger cots like Montgomery straps and scultetus binders were produced in house by cantankerous, past their prime nurses who toiled diligently in central supply. Three finger cots were oriented in the same direction and placed in a glassine finished envelope which was then autoclaved. A piece of autoclave tape sealed the envelope and verified sterility by proudly displaying diagonal black stripes.

You could do lots of fun tasks with sterile finger cots such as dressing changes or Foley catheter insertions without bankrupting the hospital on  exorbitant expenditures like sterile gloves. Donning sterile finger cots took lots  more practice than  sterile gloving. After carefully opening the sterile packaged fingercots with your ever present bandage  scissors, place them business end down on a bedside stand. Judiciously apply a very small dab of tincture of benzoin to the tips of your thumb, index, and second finger with an applicator  and blow dry with a couple of puffs. Smokers (which compromised 95% of all nurses) with their comprised tidal volume might need three puffs.  Press your thumb into the very center of the rolled finger cot and let the tincture of benzoin work it's adhesive magic. With the finger cot firmly stuck to your thumb slowly and carefully unroll it with your free hand while touching only the inside surface of the finger cot. Rinse and repeat for your index and second finger.

Now that you're all  gloved cotted up it's time to rock 'n roll. To maintain sterility it is essential that you curl up your bare naked  third and fourth fingers. For the time being just pretend they don't exist (I used to make believe  they were burned off in a Bovie mishap.) You do not want them flopping about contaminating the sterile field or the catheter.  You can now use your finger cot festooned fingers to make like a forceps and guide that Foley home to pay dirt. When you're in (urine) haha, its time to peal off those finger cots and hook up the drainage bag.