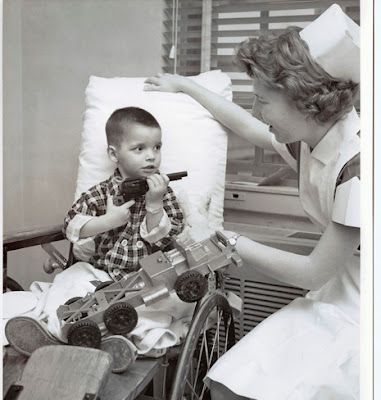 "That's the last Bicillin shot you're ever going to give!"
Posted by Oldfoolrn at 1:00 PM No comments:


Every  hospital based nursing school had a class motto. In my school where Miss Bruiser, my favorite instructor presided, the old adage was;  A journey of a thousand miles begins with a single step. Initially, we thought  this slogan referred to breaking down an arduous accomplishment into simple steps to achieve our final goal of receiving  that coveted pin, but after nearly three brow beating  years and constant harassment our assessment shifted. A thousand  miles was along way from home and diploma nursing education transported us to a bizarre new world with strange new rules and customs. Professional adjustments was our very last class and we were going to learn how to conduct ourselves as nurses in this strange new land.
Miss Bruiser, regal and pompous like a queen, strutted around the classroom with her cap serving as a crown. Her edicts were delivered sternly in the same tone one uses to discipline an unruly child or train a dog. It almost felt like she was deploying little bombs in the back of our heads, set to detonate sometime in our future nursing life.
Miss Bruiser  harshly intoned, "The first order of business is going to be the  use of tobacco products. Every nurse should learn how to smoke cigarettes in order to connect and relate to patients, especially on the psych wards where it's an absolute must and I don't want to hear any of your lamentations or sniveling. If the smoke bothers your throat do what I do, smoke menthols or don't inhale!" ( Hmm...I wondered if Bill Clinton was a nurse in a previous life, that "don't inhale" business sounds all too familiar.)
The finer points of cigarette smoking included the proper use of ash trays and cautions about letting the ash get too long. Never aggressively flick an ash or use a cigarette to gesture which might give the wrong impression. I never could figure out the rationale for those two rules, but like many other things, there were many mysteries in nursing. The rule about holding a cigarette between the index and second finger made sense. In Chicago only gangsters held their cigarettes between the thumb and index finger.
The opening lecture about smoking set the tone for the entire course. It didn't much matter what your personal feelings or wants entailed, you were going to be a nurse and it was way too late to question the rules. We got what we set out to get and that was the only thing that mattered.
Money was always a hot button issue in diploma nursing programs as alluded to in a previous post, we were not even allowed to carry money because it simply was not needed. The school met all your needs from food, housing, books, and uniforms.
The third rail in any nursing job interview was inquiring  about salary or compensation. Instant death to anyone foolish enough to ask. Nursing was not meant to provide practitioners with financial stability, but you won't ever be broke and you do eventually learn to navigate desperate situations with your pride intact.
Asking for or charging other nurses money for  just about anything will rot your pride. I think that's what makes me cringe when I hear whippersnapperns asking for payment for online education or commercial products. I realize we are in a brave new age but I'll never get used to nurses asking other nurses for financial compensation. It makes me very anxious because it makes me feel like bad things are coming and I can almost hear Miss Bruiser's howls in the background.
Working at a charity hospital highlights the unfairness in the world and careers that earn a good bit of money were seen to exacerbate the inequalities in society. Despite the financial precarity of a nurses salary there was a unique kind of ecstasy in helping those in dire straits. The overly productive lifestyle of folks with money begins to appear pointless. So instead of a class on retirement planning or investing we were conditioned to live with very little.
Although diploma nursing school did have a cognitive constipating curriculum, there were life lessons if you could see past the smoke screen. Miss Bruiser's notion of sacrificing every thing for patient care was not sustainable. A nurse's notion of self care has to extend beyond a break for a Coke and a smoke. I think whippersnapperns have a much more realistic notion when it comes to self care.
The lesson that really stuck with me was that it really doesn't require much money to generate happiness and well being. Some of my happiest days were spent in a crumbling third floor apartment with my Raleigh bicycle parked in the hall.
Lucky for me, I really never got the hang of that smoking business. If I had been a successful smoker, it's unlikely I would have survived to become an OldfoolRN!
Posted by Oldfoolrn at 6:45 PM No comments:

Do Nurses Do Windows? 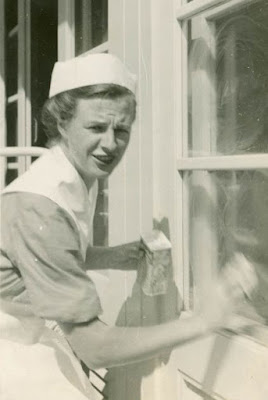 Yep! Old school nurses were window cleaning experts and I'll let you in on a secret method to make those panes glimmer brighter than a new graduate's nursing pin. Impress your grumpy old instructor and win brownie points galore. So much more fun than dealing with that balky hopper in the dirty utility room, smells a heck of a lot better too!

Step 1: Sprinkle a dash of baking soda on a gently used and lightly moistened ABD sponge. Rub the baking soda on the window and don't be afraid to add some gusto (just like the nurse in the illustration.)

Step 2: Go over the entire window with a plain, wet ABD. Central supply is usually more than happy to provide ABDs that have reached the end of their service life. One thing that does not work well for window cleaning is old, worn out student nurse aprons. I think it has something to do with all that imbedded Argo starch impeding absorbency.

Step 3: Mix equal parts water and vinegar in a spray bottle and mist the window.

Step 4: Buff aggressively with a dry ABD and stand back to admire your work. Just think what a wonderful world it would be if all things in nursing could be as fulfilling as window cleaning. Instant gratification at it's very finest. Cleaning windows sure beats scrubbing emesis crusted beds.

Posted by Oldfoolrn at 12:36 PM No comments: