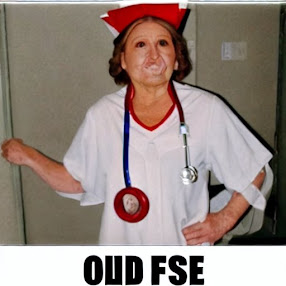 Since my native intelligence has been flumoxed by brain numbing complications from my knee replacement surgery, I've turned to artificial intelligence image generators for some foolish amusement. I typed in Old fool RN on "Stable Diffuusion," an open source image generator and my prompts produced this appropriate image. Maybe I should replace that rather dated blog profile photo of me standing under the overhead lights in the OR. Hmmm...I love how that under the overheads lingo sounds. It doesn't take much to amuse a fool.

If you have an opportunity check out Stable Diffusion. It's easier than a camera or paint brushes to construct images. Hopefully artists and photographers won't be data based out of an occupation, but who knows?

Posted by Oldfoolrn at 12:28 PM No comments: 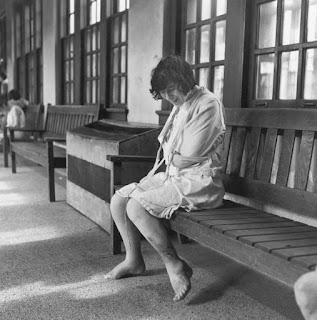 At the height of the Viet Nam War, Buddhist Monks doused themselves with gasoline and immolated themselves near U.S. facilities to protest America's involvement in the conflict. Two Army nurses rushed to the aid of a monk who set himself ablaze near a remote Army field hospital. A Viet Cong sniper fired on one nurse, killing her instantly. The second nurse, for obscure reasons, was ignored by the sniper and survived. Screaming hysterically and subsequently lapsing into a mute state, the sole survivor eventually found her way to a long-term ward at Downey VA Hospital, a warehouse for the mentally ill. The slain nurse was hailed as a heroine and awarded several posthumous medals and an honorary promotion to Major. A street at Fort Sheridan Army Base was named after her.

I  worked as a nurse at Downey V.A. Hospital for several months before I was aware there were women veterans confined amidst the 1600+ men. One evening I received a frantic phone call from a nurse in Building 135 asking if I could come to their ward and start an IV on a patient who was seizing. My recent medical background was an anomaly among Downey nurses. Most nurses employed there had worked on the back wards for decades, allowing their med-surg skills to atrophy. Eager to be accepted in this strange new land, I let it be known if there was an emergent medical problem, I was available to do what I could.

I furiously jammed my bit key into the worn slot on the heavy solid steel door on ward 3A, Building 135 and the portal opened briefly and ominously clicked shut. I was shocked to see an emaciated young lady seizing away on the dayroom floor. I should have suspected that any women patients at Downey VA were sequestered in gender segregated silos. At the time, womens' roles in the military were restricted by gender. It was a male dominated world with tentacles that extended to the V.A. psych wards.

I learned there were two locked female wards at Downey in Building 135 and they were the only ones available in the entire health system. Everyone here was seriously mentally ill and a danger to themselves or others. This arrangement concentrated the most acute patients in one facility while separating them from family and community resources.

The wards at Downey VA were touted for their therapeutic  milieu, but it's a real strain to deduce what could be gained by such profound isolation. There was an on-ward dining room where meals were served to avoid comingling with the young bucks in the communal chow hall. Washers and dryers were also available to reinforce that matronly obligation of wash day duties. The place was a tour de force of isolation  and womanly perspicacity.

Surfacing from my IV start and a hastily administered bolus of Valium, it was readily apparent that the wards in building 135 were much newer than my native Building 66 which was constructed in the 1920s. These contemporary quarters were straight out of the aseptic construction of medical surgical units. The gleaming terrazo floors and ceramic tile walls were more appropriate to an operating room than a place of comfortable lodging and recovery.

I had the notion that psychiatric units ought to be constructed in the architecture of theaters; not operating rooms. There was no shortage of high drama at Downey V.A.  In lieu of a stage, the television assumed the focal point  with the viewers numbly looking on like a brace of zombies. The TV came on at seven AM and droned on until bedtime.

I heard rumors that pregnant women gave birth on the unit and indeed there was an exam room eqipped with a table that sprouted stirrups from it's distal end. Hopefully mothers were carefully screened to delineate complicated deliveries, but you can never assume when it comes to VA care. The facility was loathe to having patients treated in community hospitals and had medical surgical units on site so the men did not have to venture off base for care. Pregnant patients flayed by desperate life circumstances giving birth on a psychiatric unit made me wonder what chance the infant had for a normal life.

As I eyeballed and wondered what a lone mattress was doing  on the dayroom floor, an attendant enlightened me. "We do takedowns differently here. I know you guys over in Building 66 like to countdown and have everyone grab an extremity to apply full leather restraints, but here we just force the unruly patient into a corner using the mattress as a shield and hold them there until they calm down. Visions of a mattress held vertically and used to pin down a patient reminded me of the Chicago Police in their riot gear and shields at the 1968 Democratic Convention riots.

Walking back to the hallowed halls of building 66 I thought of a cat driven high in a tree by a pack of dogs. Safe at last, but completely isolated like the women in Building 135. Maybe it's time to call the fire department.

I encountered a tsunami of post-op complications following my total knee replacement surgery in August, but am starting to feel a return to my foolish baseline.  I received a fascinating email from Anna Pivoras, Executive Director of the Boone County Museum of History in Belvidere, Ill that got me back to thinking about this much neglected blog.

Anna read my posts about Downey VA Hospital because she has an amazing collection of journals from a woman who was a patient at this facility. Janet L. was a college graduate who played the organ for several churches and was very ambitious and active in her community. She joined the Army from 1942-1945 and taught kindergarten after leaving the service. She gave the appearance of being highly functional as she was engaged, had a nice car, and apartment.

After the death of her parents Janet decompensated and was sent to Downey for 3 months in 1967, where "they just wore her out." She became physically ill and was treated and sent back to her ward while still suffering from bouts of nausea. Unfortunately, this was fairly common at Downey. One of my saddest memories is of an elderly man suffering from psychosis as a result of an extended period of time on cardiopulmnary bypass placed in with young psychotic Viet Nam veterans.

The journals from 1971-1974 document a sad and troubled life with paranoid ideation, She chain smokes, a habit of just about every Downey patient because "GI" cigarettes were free and if you had funds, sold for 27 cents in the canteen. She has constant nightmares about shots, needles, hospitals, and psychiatrists.

This sad story awakened my memory of the 2 womens' wards at Downey VA Hospital which were pretty much isolated from the rest of the facility. As soon as I can organize my thoughts, (HA...HA) not an easy task in my shape, I hope to get a post together on this forlorn topic.

Posted by Oldfoolrn at 6:56 PM No comments: