Life Before Piped in Oxygen - Tanks A Lot

I thought those gigantic "H" cylinders of oxygen, not to be confused with their lesser sized brotherern, would be with us forever in the hospital. Oxygen delivered to wall outlets in patient's rooms seemed like a pipe dream because we had enough problems with our common old ordinary plumbing. There were steam leaks from autoclave pipes that resembled Old Faithful and recurrent problems with clogged drains. Pipes and problems went together like tweedle dee and tweedle dumb. How in the world could this ever work with a gas under high pressure?
I couldn't imagine oxygen pipes being exempt from similar pipe problems and, of course, I was an ace with the skills necessary to course these massive green cylinders around and about hospital wards and halls. Who needs fancy piped in O2?  A weak mind and a strong back were the only prerequisites for being an oxygen delivery boy, and of course the eager nurses and cyanotic patients were always overjoyed to see me with my life sustaining cargo. Just what a fragile adolescent male cast adrift in a sea of estrogen needed for an ego boost. I was really doing something worthwhile! This is why I chose nursing as a career instead of an auto mechanic.
Oxygen tank storage rooms were special places and out of bounds for most of the fairer sex. Green monsters chained to 2X12 wooden planks and weighing in at over 150 pounds required some muscle and lots of practice to safely handle. I used a trusty dolly to transport these bemouths and once they were set in motion inertia took over. Stopping these rolling monsters was akin to putting the brakes on a battleship.

The other tricky part was maintaining the correct incline while tipping the dolly into position. There were dollys with training wheels for the more cautious, but the tiny caster like wheels used on the trainer support system were prone to gyrating like a belly dancer and slowing the entire delivery process. It was no fun pushing these bruisers down a hospital corridor with those tiny wheels doing the watutsi.
Training wheels also impaired the ability to maneuver the tank into position at the patient's bedside. It was possible to fine tune the position of the tanks when it was released from the dolly by carefully rolling the base of the tank which was all fun and games until you rolled an "H" cylinder over your toes. I preferred the dolly sans training wheels.
Alas, all good things must come to an end, and the conversion of cavernous hospital wards to semi-private rooms was a game changer. Wrestling a colossal "H" oxygen cylinder into the cramped confines of puny 2 bed hospital room was akin to stuffing an elephant into a phone booth, these green monsters longed for the circus big top of a spacious ward where there was ample room to roam.
The construction required to section off individual rooms from the big tent arena of a hospital ward provided an opportunity to run pipelines for the bedside delivery of oxygen, and an end to wrestling with the big green monsters.
Endings like this are usually bittersweet. Yes, piped in oxygen was very convenient, but the bedside delivery of something as life sustaining as oxygen afforded the delivery boy an entire cosmos of goodwill. It was heartwarming to witness the relief and gratitude of patients and nurses alike, while I quickly switched out regulator yokes and twisted my oxygen wrench to the on position and noted the swing of the needle on the pressure gauge from near empty to full, good for another few days of life sustaining oxygen. I was transformed from lowly delivery boy to a genuine care giver and that was good enough for me.
Posted by Oldfoolrn at 1:02 PM 2 comments: 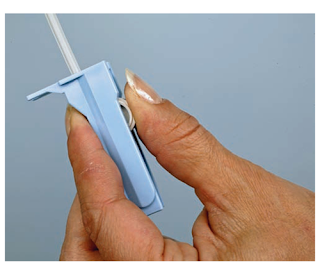 The past is like a foreign country where things are done differently, before the extravagant complexity of intravenous pumps and controllers, simple little roller clamps ruled the roost when it came to IV regulation. I was totally fascinated by these clever little gizmos and even had a collection of vintage roller clamps that I recently unearthed from my nursing archives basement junk hoard.

These unsung heroes of the IV therapy universe deserve further study as they are not as simple as they appear. An injection molded cage with wheel guides molded into the sides to accept the axles of the adjustment wheel is the most obvious feature. When the wheel is positioned at the top of the housing an uncompromised flow of IV fluid ensues. The device must apply just the right amount of friction to the plastic tube to remain stationary while leaving the lumen of the IV tube wide open, not an easy task. The device then had to regulate the flow of IV fluid by changing the lumen of the IV tubing as the nurse turned the adjustment wheel.

There was strict dogma delineating the correct position of the clamp on the tubing.  Our rigid, uncompromising diploma school instructors insisted on having the roller clamp positioned about 2 inches below the drip chamber so as to be able to locate it in the dark. Old nurses never, ever flashed on blinding overhead room lights at night. Sleep was revered as a healing agent. Having the clamp just below the drip chamber made it easy to locate at night.

There were 2 methods of establishing a flow control region within the clamp housing and one entailed the wheel traveling along an inclined ramp molded into the bottom wall of the device. The other entailed a clamp with the base parallel to the open wheel access port, not a ramp in sight!  The wheel guides were inclined so the wheel traveled at an angle to the base of the clamp whereas the wheel was much closer to the bottom of the clamp when rolled down. The pressure on the IV tubing was varied by the up and down movement control wheel as it moved along the inclinations in the wheel guides.

Some really fancy roller clamps were dual action in that both a ramp and a variable inclinable control wheel changed the lumen of the IV tube. Some things in nursing made no sense and one of the most common places to find these over engineered, exquisite roller clamps was on clysis sets that were used to give fluids subcutaneously. Drip regulation on clysis sets was not a big deal, so why the fancy roller clamps?  Some mysteries are never solved, especially in nursing, but that's a topic for another day.

Clysis sets were really old school and not subject to medical supply companies seeking to maximize profit margins by making cheaper roller clamps. Travenol clysis sets with dual action clamps even had metal axle spindles on the control wheels. I'm sure it would have been more cost effective to injection mold the wheel and axle in one piece. No cost was spared in producing these roller clamp gems.( For more foolishness on clysis:  https://oldfoolrn.blogspot.com/2015/07/down-quart-hypodermoclysis-to-rescue.html . )

One of the problems with roller clamps was a phenomenon called control point drift which occurred when the control wheel spontaneously moved to a region of less pressure increasing the lumen of the IV tube resulting in increased flow rate. Definitely not a good thing, especially when titrating vasopressors. The dual action clamps with metal control wheels were rock solid once adjusted. The increased  friction exerted by the metal spindles effectively attenuated control point drift.

Another problem with roller clamps involved the properties of the PVC intravenous tubing itself. After adjustment a phenomenon known as cold flow creep sometimes occurred. The lumen of the IV tube would decrease even though there was no movement of the control wheel. Lengthening the control zone on the clamp helped control this problem. Generally speaking, the longer the roller clamp the more stable the infusion rate. Short, stout roller clamps could be a real bear to regulate, some nurses even resorted to taping the control wheel in place.

The labor investment required by manual IV control was considerable because roller clamps needed frequent adjustment, but who would you like to see standing at your bedside, a concerned nurse or a noise barfing electronic poseur? Roller clamps also limited the number of IVs that could be managed on a ward. On a 30 bed unit the maximum number of  running IVs was abour six. Roller clamps are long gone, but not forgotten.