Crime and Punishment was more than a great Russian work of literature. To a lowly diploma school nursing student it was an integral component of the educational  training process. Mishaps, oversights and downright mistakes were all dealt with by mean spirited instructors out to teach a lesson that usually incorporated humiliation and the infliction of discomfort if not outright pain.

A bulletin board in the lobby of our nursing school was referred to as the wailing wall or the wall of shame. It publicly proclaimed the scores on NLN proficiency exams with the less than stellar results underlined in red and accompanied by cryptic notations to see Miss Bruiser for further review or report to so and so for remediation. The "reviews" were not pleasant and "remedial" usually meant painful and/or humiliating of the highest order.

My scores in obstetric nursing were not up to snuff and as a shy, 19 year old male I was ordered to teach a post partum mother's class. "Fool," Miss Bruiser intoned in her most somber voice, "I've got something special in mind just for you. You  are going to teach new mothers how to care for their infants." It was as if Bozo the Clown had been put in charge of a manned spaceflight to Mars.  I had to demonstrate with a baby doll how to bathe and care for a new born infant. My "students" were all experienced multigravadas that did more laughing and chuckling at my ham fisted, clumsy attempts than an audience at the Comedy Club. I think it was probably the most embarrassing episode in my entire life and I have a special knack for putting myself in embarrassing situations.

My procedure pal Janess was very busy with passing meds and was late turning one of her patients. Miss Bruiser caught her in the act of being 20 minutes behind the turn schedule and had that look in her eye that shivered our timbers to the core. We knew something was up the next day when a bed from the nursing practice lab had been wheeled front and center in the nursing school  auditorium. Before the day's lectures began, Miss Bruiser ordered Janess to hop into the bed and with her usual brusque mannerisms proceeded to "position" Janess with the entire class as a captive audience. When all the bending and twisting of extremities was completed, Janess found herself in a side lying knee-chest position with her head canted at such an acute angle that  her mandible was parallel to her clavicle. "You will remain in that position for the duration of today's lectures," barked Miss Bruiser as she ram-rodded  the siderail up with enough force to elevate the entire bed. The entire class witnessed Janess's contortionist like  punishment  that went on for nearly 4 hours. When she was released from the surly bonds of the bed she could barely walk and all she ever wanted out of life was to be a nurse.

Thankfully, the operating rooms were out of bounds for Miss Bruiser, but Alice, my favorite nursing supervisor was a perfect stand in with a bag of punishments  honed over decades of service. She had a real obsession with finger nail length and would approach nurses at the scrub sink with her millimeter ruler at the ready. One millimeter was the specified nail length and any deviations were treated with a subungal curettage with the business end of a mosquito hemostat. I learned the hard way that the subungal space is highly innervated when Alice began carving away on me while I was a novice OR nurse. I learned how to shave  my nails to half a millimeter length  for an extra margin of safety.

Alice had a thing about tucked in scrub shirts because she claimed leaving them out provided an escape for sub-axillary micrcocci which she affectionately termed "pit fallout" not to be confused with perineal fallout. She  also claimed that lose dangling scrub tops were at risk for inadvertently contacting a sterile field. Alice's cure for untucked scrub tops was an aggressive manual tuck in followed by a practiced upward yank of the scrub pants. I believe the street name for such a maneuver is a "wedgie" and it was something to be avoided at all cost.  I always carefully tucked in my scrub top to avoid this pitfall..

Getting caught wearing gloves for anything but a sterile procedure was a serious deviation from accepted hospital practice. The punishment for wearing gloves was usually a cleaning assignment that involved hospital beds encrusted with a variety of dried on excrements and don't even think about donning gloves.

In the old days things were done in a different way. Nurses scraping by on a subsistent wage faced a wild, chaotic hospital work environment where there were few cures for some very dark illnesses. In this entropy rich culture rigid rules and their subsequent enforcement provided a twisted sense of security to hardened old nurses. Of course, things are different today...I hope.
Posted by Oldfoolrn at 6:58 PM 7 comments:

Email ThisBlogThis!Share to TwitterShare to FacebookShare to Pinterest
Labels: Foolishness

Time Out - I Contaminated my Gown 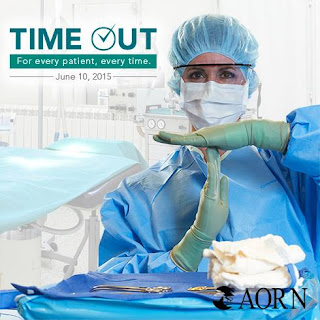 President Trump now seems to be buddies with his old North Korean nemesis and  most likely has surrendered his "dotard" title. So.... I've been thinking about changing my handle from OldfoolRN to OlddotardRN because there  is just so much about modern operating rooms that fall beyond my level of comprehension.

What happened to the sacred tiled temples that were once ORs?  Modern ORs have sacrificed  their penthouse location to practically anywhere in the hospital and worse yet resemble a waiting room at the Greyhound station. Valued work areas have been converted to electronic warehouses with enough computerized  doo dads to land a 747 in a whiteout.

The above illustration is the latest  iteration in a long line of befuddling situations. When I initially laid eyes on this young, scrubbed  whippersnappern I had that weird feeling that totally smacked my gob, (see, I can talk like a youngster if I try real hard.) She just contaminated her right hand by elevating it well out of the accepted zone of sterility. Everyone knows that the sterile part of a gown is restricted to below the armpits and above the waist tie-NO EXCEPTIONS.  If Alice, my favorite OR supervisor were on the scene she would be swinging her sponge stick like a baseball bat at this poor nurse's knuckles. Breaks in sterile technique earned the most severe knuckle bashing and I can almost see  Alice winding up like Mickey Mantle at the plate.

I educated myself about the situation and learned this nurse is calling for a "time out," which probably means she recognized the error in her ways and wants a sleeve and a new glove from the circulator. Asking for a sleeve to cover the contaminated section of a gown was a humbling experience because it required the assistance from a sterile member of the surgical team.  A surgeon helping a scrub nurse provided ample fodder for endless jokes. Dr. Slambow, my general surgeon hero usually made the nurse step away from her Mayo stand and assist with the surgery while he assumed scrub nurse duties to demonstrate the correct way of doing things.

There are a couple of other issues with the way this nurse is conducting her duties, but I think I'll let my esteemed readers point them out.
Posted by Oldfoolrn at 6:56 PM 10 comments:

Email ThisBlogThis!Share to TwitterShare to FacebookShare to Pinterest
Labels: In The OR, Uniforms

The local healthcare giants have discovered a new advertising strategy that must be lining their corporate coffers with gold. I was sitting in a crowded waiting room awaiting my next "experience" to begin a new health "journey" when the giant flat screen  flickered to life with an engaging story of  a profound, deep illness tale and subsequent recovery thanks to the miracle workers at the corporate hospital giant. I don't have one of those magical flat screens  in my little hovel; my 150#  Baby Huey tube TV brings in more nonsense than I can stand and all I use to get a signal is an ancient rabbit's ear antenna.

These corporate generated gems follow a predictable script and typically involve a respected member of the community such as a minister or retired kindergarten teacher sustaining a life threatening illness or injury but with treatment at "Big Bucks Hospital," is now back as a functioning member of society. Here is a sample.

Reverend Bagley was singing a hymn to the congregation with his lovely wife of 53 years accompanying him on the recently restored pipe organ. He suddenly clutched his chest and fell over backwards impacting his head on the altar rail. BBH  cardiothoracic surgeons performed a triple coronary artery bypass and repaired a septal defect that was found incidentally. Neurosurgeons promptly averted a life-threatening subdural by performing an occipital craniotomy. Now the good Reverend is back to singing in church with his grateful wife at his side. Remember -  choose your healthcare as if your life depended on it.

Old time nurses like to tell stories too but I don't think they would serve BBH's marketing needs. These stories are usually of complications (surgical are  the most profound,) that change someone's life forever. The purpose of these grim tales is to alert others of the mechanism of action so the event never happens again. Here is a sampler.

Officer Friendly was helping a stranded elderly lady change the tire on her old Ford and felt a sudden surge of disabling dizziness. He was transported to BBH where an MRI of the brain revealed a rather large juxta cortical area of increased signal uptake that could be neoplastic, encephalopathic , or vascular. A brain biopsy was recommended but the stereotactic head frame was ferrous and could be only used with CT. The lesion failed to visualize under normal CT protocols so two large bore IVs were established and contrast media was infused as rapidly as possible in a futile attempt to visualize the lesion. The fluid overload prompted a hypertensive crisis that ruptured the intracranial lesion which on autopsy was found to be a fragile arteriovenous malformation.

Somehow, I recall the later tale much more vividly than the feel good corporate fairy tale stories. Must be my age.