Cyclopropane Anesthesia - A Blast From the Past 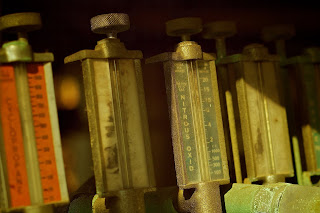 Inhalation anesthesia was dominated by ether until cyclopropane made it's debut in the late 1930s. This new agent was potent and did not induce the unpleasant nausea and vomiting associated with ether. Those operating room scenes from Ben Casey or Dr. Kildare where the patient is asked to count to 10 after the anesthesia mask hit their face were classic cyclopropane inductions. Most were sound asleep by the count of 3. Cyclopropane was like magic pixie dust in an orange steel cylinder;  inhale it and almost instant anesthesia, back on room air, and presto... near immediate emergence. There was only one problem, cyclopropane was explosive and had the potential to turn just about any cysto room into a wiener roast.

Every old time operating room suite  had a cyclo room that was heavily modified to avert cyclopropane detonation. I always liked the way cyclo room sounded when pronounced, it had an eerie Alfred Hitchcock feel to it because it sound so much like "psycho room." Indeed these were different sort of rooms where strange rituals and  happenings prevailed.

Cyclo rooms persisted until the early 1970s. Any new OR suite constructed post 1970 lacked an explosion proof room. The first line of defense against exposions was the elimination of statuc electricity discharge by grounding everything to a terrazzo floor which was interlaced  with conductive copper dividers. A gleaming terrazzo floor lined with glowing copper dividers was a beautiful sight.

Everything in the room was supposed to be grounded to the conductive floor. Operating room personnel wore shoes that were modified by a metallic plug smack dab in the middle of the sole and shoe covers had a conductive strip running from toe to sole. First order of business upon entering a cyclo room was testing shoe conductivity by stepping on a small bathroom scale like device. A green signal meant all was well and it was OK to proceed. The shoe testing requirement also served to exclude rubbernecking snoopers and busy body administrators. Only the personnel that really needed to be there were present. An anesthetist, 2 nurses, and a surgeon with an assistant could handle just about anything that came along.

Equipment in the OR was grounded to the floor by tiny metal chains that jingled  when the furniture was moved about. Old operating rooms were always furnished, never equipped. The anesthesia cart which was always a repurposed Sears Craftsman rolling tool chest  had double chains. Why take chances?

The other approach to explosion proofing the room was a bomb squad containment mentality. Potential sources of explosion were shrouded in a heavy steel housing. Operay overhead surgical lights had a particularly robust containment chamber that I thought resembled Russia's Sputnik satellite. I'm not so sure I would like to be laying on the table with that ominous black orb hovering  overhead. It looked spooky to me.

The electrical switch for the Operay was covered in a heavy leather boot that looked like the covering on a Mack truck gearshift. Every time I turned the overheads on, I imagined the carefree life of an open road trucker as opposed to facing up to the stressful work ahead. Oh well...at least I did not have to worry about unannounced visits from my favorite nemesis, Alice, the all knowing supervisor, always steered clear of the cyclo room.

Working in the cyclo room was always the best part of my day, and then later on, the best part of my night. On call, high risk emergency trauma surgery was the perfect venue for cyclopropane because it actually elevated blood pressure to improve perfusion. A good question was; If cyclopropane is so frequently selected for the high risk trauma patient, wouldn't it be good for the healthier patient? The limiting factor was the risk of catastrophic explosion.

I loved the peace and quiet in the cyclo room. There were no Bovies  buzzing or power tools whirring, just the quiet swish as the anesthetist went about  breathing for the patient. The brisk snip sound of straight Mayo scissors cutting ligature after ligature was almost hypnotic.  Occasionally while in the midst of a messy trauma surgery you could actually hear a vessel bleeding.

Cyclo also had a very pleasant, gasoline like smell that always reminded me of one of my favorite high school courses, auto shop. No matter how carful the anesthetist was with holding the mask, a tiny bit of cyclo always seemed to pervade the room.

Attending anesthetists often told the residents that cyclo was to be   handled with the finesse of a violinist, not with the banging of a kettle drum. Anesthetists were also advised to keep in physical contact with the patient at all times to keep the electrical potential balanced.

Whenever I see a modern operating room furnished with enough electronics to land a 747 in a whiteout and multiple OR personnel milling about it shivers my timbers to the core. To heck about worrying about the finesse of a violinist, these rooms are the equivalent of a symphony orchestra complete with a grand piano. Cyclopropane R.I.P.
Posted by Oldfoolrn at 6:44 PM 9 comments: