Old time abdominal surgery was a big deal with a lot of little nursing interventions that are unheard of today. The first order of business was to prepare a "surgical bed." I remember our instructors lecturing us that "The first thing to do is to determine which side of the bed the cart will be on when the patient is transferred back to his bed." The top sheet was then carefully fan-folded to the opposite side of patient entry and the top layer of sheet formed into a triangle that could be grasped and quickly pulled over the patient. Sometimes the orderly would attempt to transfer from the "wrong" side of the bed and panic ran wild among the students. Don't bother with the patient's airway, if you folded that sheet and it was on the wrong side of the bed you were in a heap of trouble.

The bed had to have a heavy muslin draw cloth with a scultetus ( skalte' tus) binder carefully centered in the middle. We used to remember the bizarre name of these things by thinking of a skull and a cup of tea that "us" applied." These binders were made in Central Supply by aging  nurses from old draw sheets. The draw sheet was divided in half and two lines of parallel  stitching about 18 inches apart were run down the center. Six to eight cuts were made from the outside to the inside of the drawsheet to the bilateral stitching at a right angle  to create "tails."

The post op patient was transferred from the OR cart to a position in bed lying prone with his abdomen centered on the binder. This thing was going to be applied very snugly around the patient so the gown had to out of the way. The binder was applied directly on top of the abdominal dressing which was secured with another hospital made product, "Mongomery Straps." It was prudent to do the initial binder application while the patient was still at least partially anesthetized to avoid pain associated movement.

The tails of the binder were wrapped around the patient very tightly as if in a Giant Python's grip and the top and bottom tails secured with safety pins. The middle tails were interwoven and friction held them in place. If the binder was only going to be on for a short period of time as in a minor procedure, towel clips could be used to secure the ends. Towel clips were much more secure but less comfortable for the patient. 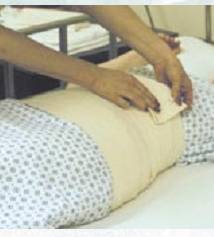 This photo shows application of a binder. We were taught to apply it next to the dressing, never over a hospital gown. You just earned a bunch of demerits for this stunt!

We learned how to apply binders by practicing on each other. Miss Bruiser, one tough cookie of a nursing instructor demonstrated how to apply these things by using me as a victim patient.  When she was done, I felt like all the stuffing was being squeezed out of me. It was definitely unpleasant. This was the same instructor that told us to slap the injection site before giving an IM injection to "reduce discomfort." This old nugget of advice never worked. Perplexed patients used to ask "Why did you spank me?" and in peds the kids would only cry and scream louder. Miss Bruiser did not tolerate fools and was very insistent so we followed her instruction whether it worked or not.

The rationale for a binder was for patient comfort and to decrease the chance of evisceration. Patients really liked binders and they did seem to help with those ghastly huge incisions. Around 1970 or so commercially made binders were available at our hospital and they were much easier to use. They had very nice functional metal buckles to secure the tails of the binder.

Next to the binder, a common procedure after abdominal surgery was low intermittent Gomco suction. Hospital wards and rooms did not have piped in suction so we had wheeled portable devices called Gomcos, named after the company that manufactured them. The drainage from a NG tube was collected in a big glass bottle that had to be emptied every shift. I dropped a couple of glass IV bottles, but luckily never a huge Gomco bottle. I guess sometimes God looks out for fools.

After all the manipulation and retraction done during abdominal surgery, it often took a couple of days for peristalsis to return. The NG tube to low Gomco was kept in place until bowel sounds could be heard again. Patients were always delighted to get rid of their NG tubes.

I used to love the  rhythmic clicking and purring noise those  old Gomco machines made. When the low suction would initiate they would make a subtle "click" and then as the suction started they made a low pitched purr with a nice gradual crescendo. The cycle would then repeat. Sometimes the NG would occlude and this cycle would be interrupted for irrigation.

I realize binders and Gomcos are now a part of history, but in their time were very useful and provided a lot of bang for the buck. Binders were recycled form draw sheets and those old Gomco machines never broke down.

If I had any sense, this post would end here, but I have to relate this story of foolishness that has nothing to do with binders or Gomco suction. I once worked with an aging neurosurgeon, Dr. OCD that had a way of getting whatever he pleased from the tight wads in hospital administration. After receiving a new piece of equipment or obscure instrument he would strut around the OR bellowing that "We now have a left-handed Raney Clip Applier in our neurosurgical armamentarian." I guess armamentatian is a reference to medical resources available, but OR nurses had a hard time from giggling when he spouted off like this about some instrument or equipment that would never be used.

One day when Nancy and I were damp dusting the overhead lights in the OR, I started blabbering that we had new rags in our "armamentarian" to dust for the next case. I did not notice that Dr. OCD was standing in the doorway. He gave me one of the nastiest, mean looks he could muster under that surgical mask. I quickly shut up and tried to be extra pleasant to him. Luckily, I was one of his favorite scrub nurses so I did not get fired. Whenever I hear that armamentarian word it brings a big smile to my wrinkled up old face!

Posted by Oldfoolrn at 7:20 AM

Email ThisBlogThis!Share to TwitterShare to FacebookShare to Pinterest
Labels: Procedures, Tools of the Trade