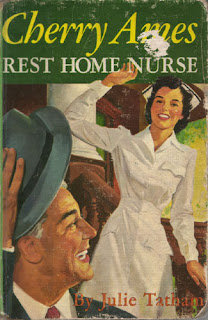 I've been meaning to write a post comparing modern scrub sinks to those of yesteryear, but I haven't been able to get Cherry Ames off my mind since that last post. It's an addiction of sorts that rears it's ugly head from time to time.

A 12 step approach is probably in order here. I've been practicing that opening line, "My name is Oldfoolrn and I'm a Cherry Amesohloic." Oh well, I could give her up anytime, maybe next week. I'll get some help. She is interfering with my blogging, but I'll just have to try harder to put those Cherry Ames books down.

How is this one for a classic? "Cherry Ames, Rest Home Nurse."  Cherry  even avoids the pejorative connotations of using that nursing home terminology in the title. I bet there is nary a mention of decubitus ulcers or manually removing a fecal impaction. Just look how delighted that cheerful oldster beams as Cherry greets him. I like how that head gear tells a story. Cherry in her nursing cap and the oldster tipping his stylish hat to Cherry. There was nothing like a cap to establish a nurse's identity. 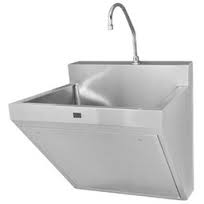 Well that's enough of Cherry. Recently a whippersnapperrn invited me to view a new operating room suite at the local hospital healthcare system. Wow! the first thing I noticed were the scrub sinks. They looked like something out of my grandchild's toy kitchen. Stainless steel might look nice in a gourmet  kitchen. But from my perspective completely unsuited for a surgical environment.

The noise made by the cascading water striking the stainless steel sink sounded vaguely familiar. Then suddenly like an epiphany, it came to me. The sound was an exact replication of a drunk voiding on a garbage can lid. This used to happen constantly in the alley behind my Chicago apartment.

The willy-nilly placement of these modern scrub sinks is another issue. Just hang them on a wall near the OR. Back in the day of huge porcelain sinks, placement was an important consideration. I have seen old time scrub sinks positioned with a beautiful view of the Chicago skyline or with a view into the OR. It was nice to be able to fix your gaze on pleasant distant scenery before all that close up work ahead in the OR. It was also fun gazing into that tiled temple of an operating room imagining how you were going to set up your Mayo stand.

That puny little foot activated faucet head is pathetic. It puts out as much water as  an octogenarian with an enlarged prostate. It's probably energy star approved, but we never worried about that. Our sinks had a length of perforated pipe running above and parallel to the sink. Water could be toggled from a trickle to Niagara Falls level with a knee operated valve. Nothing makes a lowly scrub nurse feel more powerful than knowing you have the capability of replicating a natural wonder like Niagra Falls by just a wiggle of your knee. 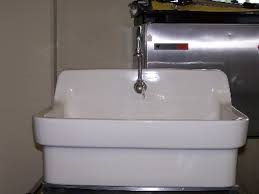 Now this is a scrub sink. Proudly emblazoned with a name like AMERICAN STANDARD or SPEAKMAN. I can close my eyes and still see that proud name printed in blue on that brilliant white porcelain sink. When you were called in on a late night trauma, it was a real pleasure standing before this sink scrubbing. The brilliant white finish waking you up and preparing you to face those bright overhead lights in the OR.

We were required to scrub a full 10 minutes before each case usually with Phisohex which was later found to be a neurotoxin. I guess I could blame some of my dementia fueled foolishness on the scrub soap. We were also required to scrape out that subungal area under our nails before the first case. Your nails were required to be trimmed 1mm. and we actually had a supervisor that measured fingernails. Who knew that area under your nails had a fancy name like subungal? We never learned that one in anatomy class!

These scrub sinks were so big that they had another use. When a surgeon removed a questionable specimen, pathology would come up to the OR and dissect it in the sink. That white porcelain offering a beautiful neutral background for the specimen. I recall one instance when a pre op patient was parked in the hall and started to witness one of these intraoperative dissections. "Yecch! what's that?"  she shrieked. I sheepishly informed her it was a portion of a stomach and quickly relocated her down the hall. I felt really bad for her and stayed at her side until her room was ready for her. I guess she was more curious about what was going on than any thing else.

Comparing old and new scrub sinks is like comparing a modern Mini Cooper to an old Cadillac Eldorado. Sure. The Mini Cooper is far advanced and sophisticated, but it still feels like something is missing. Well I have to get back to reading Cherry Ames: Department Store Nurse oops I mean watching TV.

Posted by Oldfoolrn at 6:16 PM

Email ThisBlogThis!Share to TwitterShare to FacebookShare to Pinterest
Labels: Hospital Design, Tools of the Trade