It was close to where I was living and I did not like long commutes so I strolled in for an interview. This place was an old time government psychiatric facility with about 1800 beds. It was really a self-contained little city complete with a golf course, movie theater, bowling alley and farms that the patients worked.  I interviewed at about 9AM in the morning and the director of nursing asked if  I could start that afternoon. There were some loose ends to tie up at my old job and I was able to defer the start date to Monday. I was getting weary of being called in for late night trauma cases in the OR and tired of being yelled at by surgeons. It was time for a change. I wondered how difficult it would be to transition from scrub nurse to psych nurse.

My hero Cherry Ames (did you know her real name was Charity) had a diverse career from department store nurse to jungle nurse, so I figured that it was worth a try.

This place  was more of a prison with heavy iron bars everywhere than a hospital.  I had to enter via 3 massive bank vault type doors just to reach the ward I worked on. The FBI and Secret Service made regular visits to our ward to verify the status of various patients that had threatened past presidents. They were checking on incidents that happened 30 to 40 years ago. We used to joke with them and ask if the patient had threatened Garfield or Lincoln. They were not amused, but I made a mental note to never run afoul of the US government. Their resources were impressive.

There were 4 wards in my  2 story building and I would be working in Wards A and B which were on the first floor. I was the only RN in the building, with an LPN passing meds upstairs. The place was run by orderlies that had just been upgraded from being called attendants. I quickly befriended the big burley ones, the type you knew could win any bar fight.

Fights were frequent and there were usually 2-3 patients in each ward that were kept in full leather restraints in the "side room." This was a small windowless closet of a room between the dorm and dayroom. One of the most violent fights I witnessed involved pool balls thrown with such velocity that they could have killed an elephant on impact. Anyone surviving the barrage of the balls was gored with the pool cues. Blunt force trauma was a daily occurrence.  The orderlies were adept at "charging" fighting patients with a mattress and getting them to the ground so they could be transported to the restraint room.

The first thing I usually did coming on duty was to check the patients in restraints. I was  about to enter the side room one afternoon and the next thing I remember was waking up in an ambulance.

One of the patients had struck me so hard that my head hit the wall knocking me unconscious. According to the attendants orderlies the next thing the patient did was take my keys and stuff a letter in my pocket. I was hospitalized for 3 days with a concussion. When I was getting dressed to leave, I found the following letter was in one of my pockets. The orderlies account of the events that transpired proved to be accurate and I had the letter to prove it.

Here is the knockout letter that was delivered in  an impressive manner: 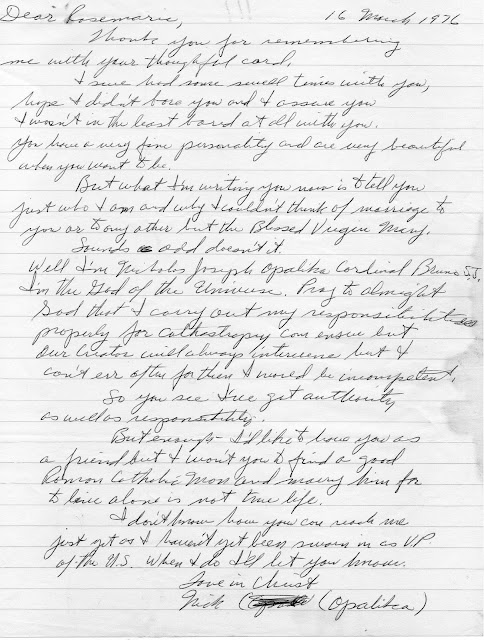 I wondered what this letter had to do with being punched, but you cannot make sense out of a madman. I took notice of the frequent religious themes and concluded that religion and psychosis do not mix.

Why is it that the most violent patients are having religious delusions?  It seems like every schizophrenic assaulted someone because God told him to do it. It was always the same  sort of universal response, like the alcoholic telling the cop he consumed "a couple of beers."

Psych was always difficult for me to make any sense out of. At least in medical surgical nursing the diagnosis had a purpose in that it dictated a treatment course. Appendicitis?  Take out the appendix. Diagnosing  Paranoid Schizophrenia did not give a clue as to the course of treatment. I thought it would have more utility to diagnose them as Holdolphrenic or Thoraholics. At least you would know which drug to use. When I asked the psychiatrists a question, they would mutter and spout off an incomprehensible answer. At least surgeons could provide a straight, albeit gruff answer to questions.  Perhaps I have a low emotional IQ (my old bat of a psych instructor labeled me with this deficit) or psych was to contemplative for my technical nature, but this job was not going to work for me. I began dreaming of Mayo Stands and steaming, hot autoclaves.

After about 18 months of the psych hospital, that distant  siren  of the OR beckoned and could not be ignored. I figured it was a heck of a lot safer arguing with surgeons and anyhow, the OR was my first love. I do not recall my psych experiences very well, but I found "the knockout letter" along with some yellowed care plans in my basement stash of old nursing documents. I left psych for good and never went back.  Psych  gave me a new sense of appreciation for being able to work with surgeons again. Sharp metal instruments, hot autoclaves, smoking Bovies  and cranky surgeons were easier to deal with than flying fists and whacky letters. They even gave me a raise when I returned to the OR. Back home at last.