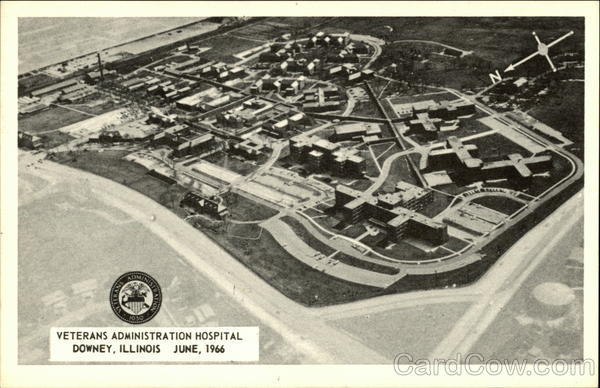 Decades ago VA Hospitals were divided in 2 camps, General Medicine and Surgery or GMS and
Neuropsychiatric or NP. Downey was an NP  faciltity  and the countries largest VA Hospital at 1800 beds. It was located about 35 miles north of Chicago adjacent to Great Lakes naval training center. It was constructed right after WWII and designed to provide a lifetime of care via institutionalization for people with chronic mental illness. There was even a full scale medical hospital with ORs and critical care units with strange names (critical care units were called GPUs or General Purpose Units)  The OR was always called EOR or emergency OR. God forbid anyone should mistake them for a "real" medical surgical hospital. That is the only rationale I could deduce for the funny names.

It was really a self contained city with it's own zip code, 60064. There was a movie theater, bowling alley, golf course, swimming pool, and various work areas for the patients such as the spoon factory where patients spent the day tossing plastic spoons into plastic bags. There was a greenhouse where the most common activity seemed to be digging compost and also a metal and wood shop. All the buildings were connected by underground tunnels which always reminded me of catacombs, with poor lighting and spooky dead ends. Staff moved from building to building topside whenever possible.

Patients were housed in multiple 2 story brick buildings with 2 wards on the first floor and 2 on the second with  total census of 104 patients n each building. Windows were covered with vertical iron bars. There were no elevators and the stairwells had imposing walls of cyclone fencing through the middle core to prevent patients from jumping. Radiators provided heat and there was no air conditioning. The buildings were like brick ovens in the summer. Open windows had no screens and various birds and flying insects entered the buildings. Electricity was delivered by underground lines which were not very reliable. Building 66 where I worked was once without power for 3 days. We used flashlights and battery operated lanterns as a backup. The patients barely noticed, but there was definitely a Halloween atmosphere with bizarre shadows and spookiness throughout. The souls of over 100 schizophrenics all in one poorly lit area.  Yikes, get me out of here!

Almost every patient had the same diagnosis (SCU) or schizophrenia, chronic undifferentiated. About 2% of the population was bipolar and added some spice to the mix. All patients smoked constantly while in the dayroom producing a dense ever present haze. Smoke Eater machines mounted on the ceiling did little to clear the air. A typical ward included the day room with connecting hallway to the dorm which was just a huge open room with beds. Just off the hallway was a restraint room with four heavy beds bolted to the floor. The beds were usually all occupied. My claim to fame at Downey was teaching a couple of very violent patients a self restraint technique. I got them to the point when they felt like slugging someone to come to me and ask to be put in restraints. I readily complied with their request and let them decide when they should be released. It worked like a charm for a couple of patients and I always thought I should have received some kind of performance bonus for my idea. The VA was always handing out bone head awards of one type or another, but I got passed over.

In the mid 1970's things began to change at Downey. When liberals and conservatives have common objectives, things happen in a hurry. I really hate political labels and politics in general, but the liberals thought chronic psych patients needed to be freed from the chains of custodial care and some thinkers like R. D. Laing even questioned the whole concept of mental illness. According to R.D. "Insanity was a rational adjustment to an insane world." The conservatives did not like to spend tons of tax dollars on what seemed like a lost cause. Downey began to change. Long term patients were discharged with terrible end results. Patients wreaked havoc in the community by strolling into restaurants and failing to pay. Camping in city parks and the homelessness we still witness today.

The "Downey" name was first changed to "North Chicago VA" then "Great Lakes VA."  The Chicago Medical School built a huge campus smack dab in the middle of the golf course. Today Downey is gone for good replaced by the James Lovell Federal Health Center. Real medical stuff without EORs or GPUs.  I tried Googling Downey and nothing even came up. I guess some things really are best forgotten.
Posted by Oldfoolrn at 6:52 PM