Cats vs. Dogs, ADNs. vs. BSNs, and the Ultimate O.R. Conflict: Burners vs. Knotters

These are certainly disunited times and there are many divisions among  nurses. The  endless ADN vs BSN debate has a life of it's own. Being an old time diploma graduate, I don't have a dog in this fight and will stick to conflicts I have direct experience with. When it comes to controlling bleeding in an operating room there are two very distinct and different types of nurses with profoundly diverging  ideas.  One group, the Burners,  just love to support surgeons using offensive, humming and smoking  electrocautery devices  or "Bovies." The  opposition composed of older, more  wise thoughtful nurses likes to cut ligatures for manual ties. I affectionately refer to them as the Knotters because nothing maintains hemostasis like a tightly secured and knotted ligature.


Opening an abdomen is done in sequence and when you are waiting for someone to fall asleep before you scar them for life, it's prudent to take a thoughtful, careful approach to minimize the inherent barbarism. Compassion is always best delivered person to person rather than nurse to patient so it's a good practice for the scrub nurse  to stop and think if this is how you would like to be treated lying on that cold, skinny table. Can you imagine your naked derriere  plastered against that gooey, mucilaginous, ice cold  Bovie  grounding plate smeared with conductive gel while the surgeon makes like Smokey the Bear and burns every bleeder in sight?  The alternative, silently tying off bleeders with ligatures is more appealing to the senses and exudes a kinder, gentler, more considerate approach.

The buzzing behemoth  of a  Bovie  unit is the  Burners favorite piece of OR furniture (back in the day we had furniture, not equipment.) Bovies were an electrocautery device that looked like a Maytag and had connections for three electrical cords. One was plugged into the wall socket, the other connected to a large metal grounding plate the size of a cookie sheet which was smeared with conductive gel and unceremoniously scooted under the patient's buttocks right before they  fell asleep. the third cord was connected to the business end of this buzzing monstrosity of a machine and resembled a ball point pen.

Some of the Burners were frustrated artists and made the application of conductive goop to the Bovie grounding plate an exercise in self expression. That big metal plate was their canvass and the goop their medium. I noticed one of these Burners with her bouffant cap on sideways to mimic an artist's beret scribbling away with the goop and mentioned her sketch looked like it was part of a freight train. "Oh no...It's a caboose for the  patient's caboose," she haughtily replied. Never interrupt a burner at work on her art.


I always shuddered when I considered the last conscious thought  a patient had before anesthesia induction  was what it felt like to land their  keister on an ice cold, gooey piece of ice cold  metal. It reminded me of someone sitting in a giant tub of Jello. YUCH! 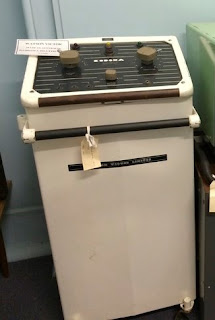 The Bovie generated a high frequency alternating current that was passed through the patient's body. There was minimal resistance at the grounding plate on the rear end, but lightening in a pen at the business end controlled by the surgeon operating a foot switch. There was big time electrical resistance at the Bovie tip: enough to occlude a vessel in a jiffy.

After the skin incision, venous bleeders begin to appear as little dark blue puffs of blood. The glistening white fat tissue forms a beautiful background for the little  pops of blood as the veins are cut. This part of the surgery always reminded me of those old 12 O'clock High TV shows with Robert Lansing. The puffs of blood resembled the bursts  of the anti-aircraft flack exploding near the vulnerable B-17s. "Hey doc we have a bleeder coming up fast at 12 o'clock," I sometimes felt like hollering out. The Bovie smoke further added to the flack resemblance. Members of the Greatest Generation made us Boomers look like slackers and surgeons from this vintage were very proficient Knotters.

Burners were very fond of simply snatching a bleeder in the jaws of a hemostat and then tapping the ringed handle with the Bovie. A puff of nostril bludgeoning smoke and that was that, no more bleeding.

For the knotters this was a time to pause and hand off meticulously cut strands of ligature. Back in the day I could take an endless spool of 3-0 silk and in the twinkle of an eye cut it into 18 inch lengths all exactly the same. These ligatures were held out like an offering to the surgical gods for the good doctor to  grasp and masterfully tie around a vein that had been lassoed by a hemostat. The scrub nurse then trimmed away the excess suture a millimeter distal to the knot with a straight Mayo scissors and it was time to move on to another bleeder. There was a reassuring rhythm to the process that was like meditation.

Hand tying did take longer than using a Bovie, but I always thought that tying off ligatures was a good way for the surgeon to limber up his fingers  before tackling the more serious stuff inside the abdomen. A time to reflect on the future course of action.

Now for that burning question: Which of these tribes do I self identify?  I  survived long enough in the OR to beat those nasty Burner impulses into extinction and am an old foolish Knotter.
Posted by Oldfoolrn at 6:20 PM

Email ThisBlogThis!Share to TwitterShare to FacebookShare to Pinterest
Labels: In The OR, Procedures