A Remembrance of Nursing Pins Past

The land of the free and the home of the brave was once home to 4,000 diploma schools of nursing  each with their own unique nursing pin. These pins were typically designed by committee and the final version was often a hodge-podge collection of sometimes divergent elements. It was tough for a committee to come up with a consensus for a coherent design.  At my alma matter the pins were the responsibility of the Admissions and Promotions committee and it required weeks of heated discussion to decide if one letter on the pin should be changed to reflect the conversion of our hospital to a "medical center." After much heated debate it was decided to change the "H" which was for hospital to "MC." Nursing pins were sacred symbols and change did not come easily.

Implant something in an adolescent brain while it's developing and it sticks forever. We were brainwashed  conditioned  into believing our pin was the ultimate reward for 3 years of soul crushing labor while  subjected to near constant badgering and belittling by down right mean instructors like Miss Bruiser. That beloved pin had a transcendant element to it that required a compulsory level of reverence. It was the alpha and omega to any 3 year diploma student. The  radiant pin glowing against a pure white background was the first thing your eye settled on when a nurse appeared on the scene and it told the story of a nurse's experience. If only nursing pins could talk.

I spent many hours staring at the cover of RN magazine when their annual nursing pin edition was published. A cover adorned with 30+ pins in glowing color was a feast for any diploma grad's  eye. The most common pin design was a Maltese cross with the schools initials plastered one on top of another over the center. I just loved pins with a singular sculpted design like the  Ravenswood Hospital School of Nursing in Chicago. The pin featured a beautiful version of the Good Samaritan that seemingly glowed in the dark. Wow.. that was one heck of a pin. 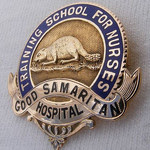 Speaking of good samaritanns this unusual pin featuring a beaver really got my attention. Simple, straightforward design at it's best. Beaver's are like nurses; hard working and they have the ability to modify their environment for unexpected needs. Beavers are also continually growing just like me after too much hospital cafeteria food. I really cherish this pin and think it has much better aesthetics than mine which resembles a policeman's badge. While working in psych, I found that it was prudent to remove my pin lest I be confused with an undercover cop. 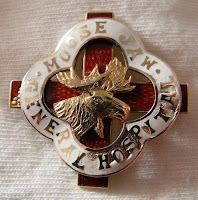 Another animal themed nursing pin with a serene looking moose in the foreground framed by the hospital's name. I wonder why the moose is gazing in the opposite direction from the beaver. I think it looks better from a nurse's view looking down to have the animal facing the nurse.   The cross in the background forms a lovely backdrop. It takes a moose 3 years to attain adulthood and 3 years for a diploma nurse to graduate; an interesting fact that ties it all together. A moose also has muscular shoulders and nurses acquire the same qualities  after a stint on the orthopedic ward. I admire these two pins because they are straightforward and very pleasing to the eye.

So many pins contain multiple symbolic features that are difficult to decipher. I was admiring the floral design on a friend's pin and was quickly informed they were no ordinary flowers. "That's the Papaverum somniferum plant that is the source for opium," I was told. Her pin was symbolic of the nurse's duty to relieve pain.

It really bothers me when I hear that present day nurses must pay money for their nursing pins. A nursing pin was no ordinary commodity that could be purchased with money. Blood, sweat and tears were how we paid for our pins. The symbolic meaning of a diploma nurse's pin stays with a person forever. I sneak little glances at my pin all the time just to remind myself of who I was am.
Posted by Oldfoolrn at 6:40 PM