Restraining patients is probably one of the most unsavory elements of nursing practice and old school practitioners were masters of obfuscation when it came to forcible restriction of movement. Even office sitting nurses of the academic/administrative complex eschewed patient restraints. Everyone did their very best to find ways around outright restraint of those under their care.

Memos from on high regarding patient restraints were filled with officialese and gobbledygook in an attempt to camouflage what was really  going on. I found a VA restraint and seclusion Professional Services  Memorandum that illustrates this point: VA Form 10-2683, Report of restraint and seclusion.  "The doctor's orders (SF508) will be initialed by the GS9-11 ward nurse. The nurse will copy the prescription (form 10-2913) on the nursing notes (SF510) indicating the type of restraint and 24 hour report of patient's condition (VA form 2915). The nurse in charge of the ward during each tour of duty will maintain a record of each application of restraint on VA form 10-2683. After the last day of the month, the nurse will sign this form and forward it to the Registrar Division - 114A."  Some head nurses referred to the monthly reports as the "Funny Papers" because restraints were not always used according to Hoyle with the frequency of use almost always understated.

Downey VA Hospital, the long term psychiatric hospital I worked at in the early 1970s made extensive use of full restraints that consisted of heavy leather cuffs secured by robust belts. My ways of caring for these patients were unique and foolish, but averted some  of the unpleasantness associated with 4 point restraints. I began a patient enlightenment program that involved patients recognizing when they were beginning to escalate and request restraints before anyone was injured. A veteran of the Viet Nam war summed things up quite  nicely, "Restraints are just like an Asian civil war-much easier to get in than get out." I couldn't have said it better myself. 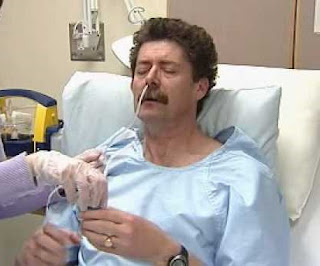 This illustration clearly shows the time tested maneuver aptly called "let me hold your hand...DOWN. Whether inserting nasogastric tubes or assisting with  excruciating procedures like the removal of Jackson-Pratt surgical drains, every old nurse had experience with this one. Initially, good intentions entailed holding the patient's hand for support, but soon evolved  into a vice grip not unlike the panic induced squeeze on the overhead bar of the Ravenswood EL train as it rounded an acute bend. Hold that patient's hand like a trapeze  artist grips the bar while the good doctor gives that J-P drain one final yank. 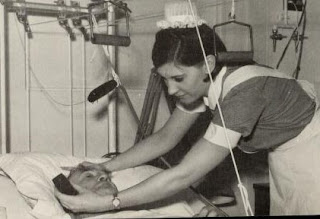 Distraction is another useful tool in the nurse's position inhibition  armamentarium   (please note, I did not use that dreaded "R" word.) This trick procedure does not work well with painful ministrations about the head and neck, but is very effective for procedures below waist  level like bedside urethral dilitations or removal of orthopedic external fixation devices. The nurse elevates the bed so that the patients eyes are close to the height of the nurse's ocular orbs. The patient's  head is immobilized between the hands as the nurse locks eyes with the hapless patient. Extreme eye contact seems to slow things down  and put a damper on some of the unpleasantness.

Children are especially vulnerable and the isolated snippets  in my mind of pediatric restraint have long sense departed. Whew! Am I ever happy for that. There is a harrowing  pediatric restraint device known as the  Pigg-O-Stat. Google it if you dare. This thing looks like a blender with the lid off and the youngster is dropped into it for X-ray procedures. It's no wonder so many people have claustrophobia later in life. They were probably popped into a Pigg-O-stat as a mere youngster.

One of the more humane child restraint devices is a take-off on the old Trojan Horse idea. The restraint device is a toy rocking horse that lures it's young patients by whimsical looks, not brute force. While the child plays horsey, an X-ray plate is slid into position and the exposure made before anyone is the wiser. An elegant restraint solution! I wish they all could be so easy.

Posted by Oldfoolrn at 6:11 PM