Cars from the 1960s were rolling deathtraps. Two  tone paint jobs, wide whitewall tires, and chrome bumpers looked snazzy, but in a motor vehicle accident (incident or crash in today's lingo) the passengers were propelled into rigid spear like steering columns or protruding cowl like hoods over the speedometer which, to say the least, were evisceration proficient. Any poor soul lucky enough to escape compression injury via steering column impalement or gutting by the speedometer was hurled head first through the windshield and wound up with spidery split open lacerations on their forehead and all too often, hopeless neurotrauma.

Initial efforts to restrain vehicle occupants and  transfer some of the destructive forces to crumpling sheet metal consisted of lap belts.  Curiously, lap belts were always referred to as "safety belts," instead of the current seat belt terminology. These girth gripping girdles prevented some of the unfixable neuro trauma at the expense of the abdominal organs which ,at least, were potentially fixable with timely surgical intervention. Typical abdominal trauma from car wrecks  involved banged up and bleeding hollow viscus organs, blood oozing spleens, and contused and bruised livers. Retro peritoneal renal injuries were less common. Maybe all that fat surrounding the kidneys protected them from some of  the trauma. 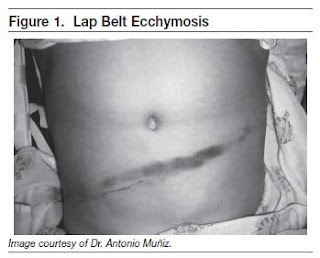 Typical stigmata of lap belt trauma consisted of a 2 inch wide ecchymotic banding across the lower breadbasket. This ominous finding almost always meant internal injuries and called for the immediate diagnostic peritoneal lavage. After cannulating the peritoneal cavity about half a liter of normal saline was infused. After  about 10 minutes the saline was allowed to drain back out by gravity. Any blood in the drainage meant a quick trip to the anxiously awaiting personnel in the OR.

Innovative lap belts caused a surge in a new kind of deceleration injury, bowel/mesenteric separations which were a good trade off for the neurotrauma sustained from crashing head first through the windshield. Most abdominal trauma was fixable if caught in time, while neuro trauma usually meant a grim prognosis.

The bowel is fixed at the flexures,the ligament of Treitz, and last but certainly not least, the rectum.  With the colon and small bowel moving forward at 60mph ( or whatever speed) the sudden traumatic stop of an accident pulls like a John Deere tractor on the intestine adjacent to these tack down areas dividng bowel from it's lifeline, the messentery. Without mesenteric connection, the section of isolated  bowel withers up and dies like a man in the desert without water.

Mesentery supplies vascular, nervous, and lymphatic connections to the bowel. It also holds our  intestines up out of our pelvis where there are enough problematic structures without dropping another player into the mix. Mesentery is one of the most underrated abdominal players.

Suspense reigned as the surgeon cautiously entered a traumatized abdomen and when the problem was finally delineated and deemed curable, a feeling of jubilation and relief was experienced by the team. Hearing Dr. Slambow, my general surgeon hero, deliver his diagnosis was always a musical treat. As the Airshields ventilator chugged out bass beats in the background there was proprietorial pride in his harmonius voice as he practically sung out "bucket handle," four notes, key of "C," ascending. The hootenanny proceeded as the intestinal resections marched along with needle drivers clicking away like castanets and heavy instruments adding dissonance clunking away in the lap tray on the back table. The finale was always the best part as we stepped down form the podium with a meticulously patched up patient that was sure to recover.

How did this injury acquire it's strange moniker? The section of large bowel stripped from mesentery did indeed look like the handle of  a bucket so the name fit. Small bowel separations were more subtle and were named after the little cloth hanging loops on the back of men's shirts of the day. Even though they did not resemble the popular breakfast cereal, everyone knew what an intestinal fruit loop injury looked like.
When the call room phone incessantly rang  at 2AM and the harried voice on the other end intoned "Motor vehicle accident ETA 10 minutes," my feeling was similar to one of those daredevils going over Niagara Falls in a barrel. Lots of mental anguish leading up to the case because the final landing outcome  was unknown. Bucket handles and fruit loops usually led to a successful plunge over the falls.

Email ThisBlogThis!Share to TwitterShare to FacebookShare to Pinterest
Labels: In The OR, Procedures, Surgeons