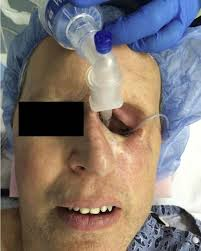 Just when I thought the days of art in medicine were extinct,  the above image made it's appearance in my email courtesy of a long time reader. This  patient had extensive facial surgery for an invasive tumor and her maxilla and eye were sacrificed in the process. In a subsequent procedure, the creative anesthetist used this artsy approach in securing her airway. Instead of passing the endotracheal tube pharynx-larynx-trachea, the path was eye socket - pharynx, (or what's left of it) - trachea. Very clever, but how in blue blazes can the pilot balloon be visualized when it's deep inside the patient's face. Art in surgery always has a down side

Whippersnapperns live in a data driven, evidence based world of healthcare, but I know of  a different world where art played a dominant role  like the transorbital airway gambit shown above. Medical arts buildings dotted the landscape and old school surgeons pulled the art card to explain complications or pathology beyond their understanding. I do think the "medical arts" terminology when applied to physician offices  was so much less pretentious than the "institute" label trending today.

Unlike the group practices of today, most vintage surgeons were solo practitioners operating with minimal oversight. These surgeons of bygone years shared something in common with Picasso and Monet, they worked alone and relied on their ingenuity as much as scientific principle. "Based on empirical reasoning, I'm going to take out this lymph node over here and maybe the one over there too," was a typical intraoperative response.

Artful surgery could carry a heavy price for the patient. Someone cobbled together a procedure to "cure" Parkinson's Disease that involved harvesting cells from the difficult to access adrenal glands and injecting  them intracranially in hopes they would generate some much needed dopamine. The aggressive surgery resulted in lots of complications with poor long term results. Artful, but dangerous and usually ineffective.

A more benign example of surgical artistry involved the use of surgical instruments. Orthopedic surgeons found a novel use for Satinsky vascular clamps in that they were perfect for nabbing errant bone chips. I've written about the creative use for grooved directors in a previous post. They make great tongue depressors, templates for duct filets, guiding suture, and as mini retractors. Artistry in surgery always has an unsavory component and burying the sharp prongs of a towel clip in an unsuspecting abdomen to test the level of spinal anesthesia always shivered my timbers.

Unfortunately, patient's bodies make for a poor canvas and scalpel wielding surgical artists often come up with an unintended surprise on their hands. I wonder how that patient above felt about breathing through her eye socket. Breathing is a whole lot different than seeing.
Posted by Oldfoolrn at 5:08 AM