It's been quite some time since I've written anything about the long ago shuttered psychiatric facility known as Downey VA Hospital. I worked there 1974-76 and recently discovered an interesting old tome in my basement junk pile extensive nursing archives.

Every ward at Downey VA Hospital  maintained a communication book which consisted of random comments by just about anyone involved in direct patient care. Relevant notes of significant findings during multidisciplinary ward rounds were among the more important recordings. The book was also supposed to contain notes of meetings with nurse officesitters and assorted busybodies, but any staff member with an ounce of sense steered clear of these crazy conclaves as a matter of survival. There is very little in the way of notes about meetings.   When one volume was filled it was tossed in the trash and a new one started. It just so happened that I rescued one of these delightful digests  from the dumpster and will share a few choice entries with my loyal readers. The entries provide a brief snippet into the life on a Downey ward. Patient names are all pseudonyms. 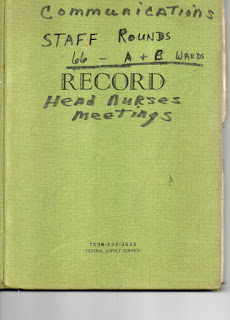 Insulin shock therapy was one of the more barbaric treatments administered to inpatients at Downey VA. The patient was given a significant dose of regular insulin and allowed to descend into shock The following note by a resident offers a valuable tip to ward nurses.
.All ward nurses should carry a round or two of Lifsavers brand candy with them in the event they have a patient that is slow to respond from insulin shock therapy. Each piece of candy raises the blood sugar approximately 10mg/%.

Mason, Wm -  admitted to drinking a pint of vodka under the water tower. Return to locked ward.

Ayers, Bob - No longer feels homicidal. Was under the influence of drugs and alcohol when he attempted to assault a psychologist with a dagger. Intelligent with insight into problems.

Farna, Kyle - Attempted to break into father and step-mother's home while on pass. Family does not want him back.

Grounds crew workers are busy spreading used grease and oil from the motor pool over the barrier wall around the building in an attempt to deter elopements. If you see a patient covered in grease you know what he's been up to.

The roofers were a bit overzealous with spreading hot tar above the "C" ward dayroom. A small amount leaked down and burned the head of  Ronald Alt. Patient sent to Bldg. 133 for medical evaluation.

Cockroaches the size of a small Shih Tzu are taking over the  "A" ward dorm. Please be more careful about screening patients for foodstuffs before retiring to bed. Several partially consumed HO HOs were found under Harry Vonsickel's bed.

Note from a nurse detailed from the medical building to cover a last minute call out on night shift: Unsafe to be in attendance in this building at any time!

Glen Rimes bit Thomas Reynolds on the calf without provocation. Since this is his second serious bite will refer to dental service for full mouth extraction.

Carlton Searing needs an ENT consult. He has been impacting his ear canals with Thorazine 200mg. tablets in a futile attempt to "stop the voices."

There is more, but I suspect you have read enough. I hope this has been a brief distraction from the Corona virus horrors. This pandemic sure has me concerned for all the whippersnapperns out there in harms way. I think of you often and hope that you are staying safe.

Posted by Oldfoolrn at 6:49 PM