Lights Out in The O.R. 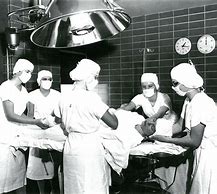 Late night trauma surgeries were performed in  a parallel universe diametrically opposed to run of the mill, day-to-day, elective surgery. In place of the measured orderliness, gowned and gloved players were often blinkered by an all consuming bone tired, sense of fatigue that descended on the room like a choking mist. The emergent condition of the patient spurred a driving sense of expedience among the weary staff. Fatigue and the hurry-up nature of trauma surgery can have bad consequences no matter how well intentioned the staff, a lesson I was about to learn the hard way.

Delusional thinking, fueled by the infinite wisdom of youth, falsely told me that fatigue was a nonissue.  I sometimes played make believe, telling myself  that fatigue actually made me perform better by focusing on the things that really mattered.  I often felt like the grand wizard from the land of OZ. Hidden behind the curtain of mask and gown, I was just pulling on the strings and manipulating the levers to quickly load needle drivers and collect bloody sponge sticks.

My delusion of being fatigue proof was about to be shattered when the phone in the call room awakened me with an 0200 hour  emergency one early Sunday morning. The trauma gods always got restless on Saturday nights in Chicago. It was a harried nurse from the ER advising me that a hot trauma was being loaded unto the elevator for a nonstop flight to the 7th floor OR. A teen aged stabbing victim with volume depleting abdominal bleeding was our patient and the ER nurses had applied a scultetus abdominal binder in hopes of slowing things down. Not an encouraging prognostic sign.

The Lakeview  neighborhood was home to the Aristoctats, a youth gang that often meted out punishment with the blade of a knife. Firearms were thought to be unmacho and eschewed with youthful vigor. Not a bad concept in my book, as knife  wounds were more amenable to surgical repair.

Although these kids looked menacing on the street, on the OR table they looked like the vulnerable little children they were. Their vicious behavior was often mixed with the typical adolescent sense of humor and more than one of them smiled as they related, "It's not how deep you stab your knife, it's how you wiggle it around."

I had just finished setting up my back table as the bleeding youngster crashed through the doors accompanied by the usual cast of lifesavers, pushing the gurney like it was a guided missile. Dr. Slambow had gowned and gloved himself while I quickly tossed  together a basic laparotomy setup. I was loaded for bear, complete with a boatload of Satinsky vascular clamps. My heart always did those little flip flops when an attending surgeon volunteered to gown and glove independently without the help of a nurse. Something unsettling was usually close at hand.

Dr. Slambow urgently announced that this was going to be a "Whoop-dee-doo" case. (His unique vernacular for an O.R. free-for-all.)  He  was going to start cutting  immediately without the anesthetist present. The patient was unconscious with a secured airway, but cases like this always hit me with  a feeling of raw, primal panic. Obeisance to sterile technique was tossed to that void behind the vacant ether screen and  questions like, ""What if he wakes up while we're inside his belly?; Can we stop the bleeding in time?;  Do I have all the instruments and supplies?;  What happens if that fenestrated sheet that I hastily tossed over the patient for a crude drape falls off?" I don't think there is anything more pathetic  when a drape falls to the floor exposing an unfortunate  little kid with a big hole chopped down the middle of his puny, little bread basket. Truly the stuff of nightmares, at least for me.

Things went better than expected. After Dr. Slambow carved a midline incision and  sucked out the blood things began to slow down. The inferior vena cave was intact along  with all of the other major vessels. The bleeding was brisk but confined to lots of superficial venous circuits and the spleen. After a quick splenectomy, the bleeding was pretty much under control. Dr. Slambow would clamp off a group of bleeders together and give the command to "meatball it" so the resident would tie the mess off in the shape of a little sphere. After making a few meatballs we were done cooking and the patient was doing well.

The O.R. room for trauma  was one of the oldest on the floor, selected because of its proximity to the elevator and nearby autoclave which although vintage, worked great for flashing a last minute instrument or preparing Thanksgiving dinner. We even nicknamed the old autoclave Mr. Yell N' Cuss because that's what we did when the door was unbolted and we got hit with a burst of steam due to a constipated venting mechanism.

During  the emergency trauma  surgery  I noticed, Clarence, our diligent housekeeper, peering through the porthole-like window in the door. I thought  that he was admiring our lifesaving surgery, but when the case was over, Clarence wheeled his mop bucket in with a perplexed  expression. "You folks 'spear- menting again?" he asked. "What do you mean by that Clarence?" I asked.  "You done that whole operation without the great big overhead lights tuned on!" Oh my gosh, I could not believe what we had done. I ran to the surgeon's locker room and updated Dr. Slambow on our oversight. In a tired voice he wearily explained, "Well the ambient lighting was pretty darn good and we weren't deep within a body cavity. Sometimes things work out in spite of our screw-ups."

Posted by Oldfoolrn at 6:47 PM

Email ThisBlogThis!Share to TwitterShare to FacebookShare to Pinterest
Labels: In The OR