Egyptian Fun in The Nursing Dorm

Hospital diploma nursing schools mandated that all students reside in the dorm which was conveniently located within the hospital complex. Individuality was nipped in the bud with all student nurses sharing the misery while at the same time maintaining a pseudo happy face. A monastic-like existence was thought to enhance the nursing educational training experience. Older nurses viewed nursing as a cult and eschewed an outside life for the good of nursing.

These dorms were not fun places and novice nurses slept, woke, ate, slaved for 8 hours on the wards, ate again and studied under the watchful eyes of house mothers before sleeping again. As the bewitching hour of 9 PM rolled around it was time for some fun. House mothers, affectionately known as house hags, completed their last rounds before mandatory lights out at 10PM. The end result was one hour of time for which there was no accounting. Between 9 and 10PM was the bewitching hour.

Student nurses had to make their own fun in this  stark environment that was devoid of  televisions or any form of recreation that cost real money. Of course the sewing room was open, but who felt like mending aprons or fussing with uniforms after working or studying all day. Novice nurses were pretty much left to their own devices when it came to recreational pursuits.

Water fights were popular diversions with an enema can rigged above transoms to dump a deluge on anyone answering a knock on the door. The downside to water sports was the clean up and the screaming frequently attracted uninvited attention from nosy house mothers.

Human pyramid building was the activity of choice in many diploma nursing school dorms. The base of the structure was formed by 4 girls kneeling on the hall floor and gradually built up until the tiniest girl was perched at the apex. Pyramids were fun because there was an immediate sense of accomplishment. This was something novice student nurses could do on their own without being harangued by overbearing instructors or busy body housemothers. 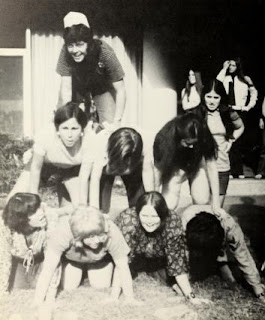 Pyramid diagrams were often used in nursing school to explain the nursing hierarchy or illustrate the priority of patient needs. There was an inherent sense of satisfaction in having fun with something that was not fun.  Human pyramids in the hall were good, clean fun.
I looked forward to our pre-clinical cafeteria breakfast at 6:30 AM where the first topic  of discussion was frequently the last night's  pyramid building adventures. Early one morning there was an unusual buzz in the air and the discussion was preceded by a "you are not going to believe this disclaimer." The girls had constructed an inverse human pyramid with the most petite girls at the base and "Big Betty" who tipped the scales at about 100kgs as the top. I wondered why so many of the more diminutive students were hobbling about!
Posted by Oldfoolrn at 6:35 PM