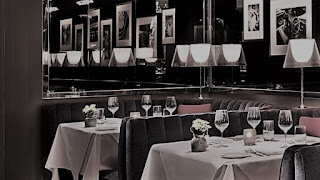 Old school hospitals offered lots of special treatment to their esteemed  medical staff. Free front row parking with valet service on demand and an ornate dining oasis which was far removed from drab, utilitarian hospital environs were the more obvious perks. Physicians were the alpha predators in the hospital food chain, far removed from nurses and ancillary staff. There were no "mid level providers" in days gone by. It was just the doctors and everyone else.

Doctors' dining rooms were entered through a solid wood door conspicuously marked PRIVATE. Inside the door was a room paneled in dark mahogany with fancy brass grills covering the radiators. Maroon Karastan carpeting covered the floor. Pictures of the institutions hallowed great healers from the ages adorned the walls with an occasional pretentious bronze  bust tossed in for good measure.  Genuine white table cloths with a fresh floral arrangement salvaged from one of the many bouquets  left behind by departing patients added to the ambience. Fancy light fixtures illuminated these deluxe digs and sculpted plaster potentiated the high brow ambience of these over stated  eateries. A two year old with a plate of spaghetti could do more damage to an over adorned room like this  than a hurricane

General practitioners and internists served the role of personal physicians and  asserted complete control over the care of their patients spending  many long hours in the hospital.  A readily available source of nourishment was essential.  These dining areas were a feeding lot open 24/7, serving snacks like Good Humor ice cream bars, bagels, donuts, and crackers laden with cold cuts or liver pate' during off hours. Normal operating hours featured  food from the hospital cafeteria embellished with little sprigs of parsley, ripe olives or whatever else the colorful characters known as hospital cooks could whip up. A distinctive touch to our hospital dining room were  bottles of hot sauce smack dab in the middle of every table.

Doctors'  dining rooms were the consummate private place for the boys to raise questions about care and explore  solutions to ethical dilemmas. Operating rooms were fertile ground for  mishaps and screw ups when  minimally trained general practitioners were  granted surgical privileges. Thankfully, they were prudent in restricting their services to simple procedures like vein strippings, tonsillectomies, and D&Cs.

A ham fisted G.P. might ask an ENT specialist if it was OK to with hold information about a patent's uvula  that had the nerve to get tangled up in an errant tonsil snare. The ENT doc usually advised it was best to be truthful since the first time a patient looked in the mirror he would notice that little thingee hanging down in the back of his pharynx was AWOL. It's best to be honest when your mistakes are obvious.

Wrong site surgery was an egregious error but could be easily explained away by claiming that the errant surgery was necessary and not a simple minded mistake. Circulating and scrub nurses would likely be fired for wrong site surgery or  foreign body oversights, but the surgeons remained unscathed except, perhaps, for an admonishment to be more careful next time.

Doctor's private dining rooms were doomed by hierarchy busting youngsters and the welcome influx of women to the medical field. Most women did not take kindly to putting their own needs ahead of patient welfare when covering up mistakes, an issue frequently addressed in all male forums like doctor's dining rooms.. Corporate healthcare had a significant role in shuttering doctors' dining rooms because of their negative cash flow. Any use of space that failed to contribute to cash flow was history.

Posted by Oldfoolrn at 6:44 PM