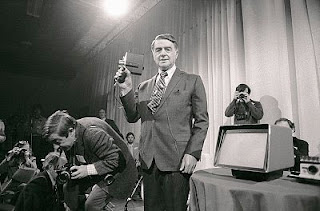 Edwin Land, CEO of Polaroid Corporation with his most technologically advanced product, the Polavision film movie camera and processor/viewer which looks like a small TV. circa1976

Dr. Oddo, Chicago's internationally known neurosurgeon and my favorite person to scrub with bounced into the operating room a couple of days after Christmas ecstatically announcing his latest Christmas present. It was a Polavision film movie camera with a viewer that processed the film immediately after it was shot. This enabled someone to view the movie shortly after it was shot. A filmed based substitute for digital recording.  It was his notion that the circulating nurse could document the key elements of some of his procedures to show off educate the neuro residents.

Shortly after  Polavision was introduced, Sony came out with the Betamax. Polavision was less expensive and more compact than the bulky Betamax. The Betamax held some key advantages, Polavision film ran for 3 minutes, the digital Betamax went for an hour. Betamax had sound while Polavision was silent. Initially, it looked like there would be decent competition between the two products. Dr. Oddo always liked to be on the cutting edge of technology, but over time digital killed film.  Polavison was a really advanced technology for the times and Polaroid spent a small fortune in R&D cost.

Polaroid then spent millions on advertising even enlisting famed photographer Ansel Adams to shoot movies with Polavision, Yoko Ono and John Lennon shot home movies of their son with Polavision. In the end not enough of the product was sold to cover development cost. Polavision was sold only a couple of years at a retail cost of about $700. The price might have been affordable to a neurosurgeon but that amount of money represented my monthly take home pay. I was not about to run out and buy one. This product was the beginning of a long downward spiral for Polaroid.

Polavision may have succeeded if it had been introduced decades earlier. It was introduced too close to the emergence of digital recording. Kodak came out with digital 8mm cameras later and the Polavision era had ended. Film for the Polavision system was even discontinued. Dr. Oddo cajoled us into filming some aspects of his surgeries for a couple of months and then lost interest with the arrival of a Betamax system. The hospital even hired an audiovisual aide to run the machine. That was the end of film.

The whole Polavision got me to thinking about technologies that were regarded as high tech, but now appear very crude. The first procedure that came to mind was the pneumoencephlogram which was invented by the famous neurosurgeon, Walter Dandy at Johns Hopkins. The patient underwent a spinal tap where CSF was withdrawn and air injected. The patient was the secured to a chair that moved 360 degress in a vertical and horizontal axis. Film X-rays were made as the chair was rotated and the air bubble moved around between skull and brain. This was a brutal diagnostic test bordering on torture and about the only thing it did well was diagnose menengiomas. Thank god for CT and MRI scans.

I think another contemporary diagnostic measure where the technology got ahead of the knowledge is with PSA testing. The sensitive test was very good at identifying prostate lesions that were best left alone and not so great at identifying appropriate candidates for surgery. Add the Davinci robotic surgery device to the mix and you really have to question if this is a triumph of technology. I am sure their are great anecdotal accounts of miraculous robotic surgeries, but are their any studies that support robotic surgery? I think this robotic surgery thing is another example of the marketing hype exceeding the benefit. I'm certain hospitals must recruit a good number of patients just to cover maintenance cost.

I wonder if electronic medical records are another Polavision in the making. The development cost had to be huge and the system cannot even communicate between different healthcare systems. When I visit my MD he has been converted into a data entry clerk. Heck even proud bedside nurses now have their heads buried in a computer screen and there is even an animal called a nurse infomaniac or is it infomatics. These people will be the Polavisions of the future. If you are not a physician or nurse directly caring for a patient it will someday be time to get off the bus. When the healthcare bubble pops those doing indirect care will be the first to go. The administrative cost in today's healthcare is obscene.

I better stop this nonsense before I get carried away. For people caring for patients, I hope the New Year rewards you with a true sense of personal fulfilment and peace. The only thing that makes me feel good about healthcare is the notion that I might have helped a few people over the years. Don't let the business of corporate healthcare rob you of that personal satisfaction of helping others during their most vulnerable time. When you get old that's all that really matters.
Posted by Oldfoolrn at 5:26 PM