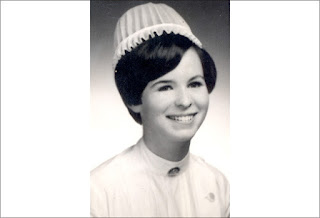 At one time there were 4,000 three year diploma nursing schools in this country, each with it's own specific style of cap. This nurse is proudly wearing her Bellvue cupcake cap, so called because of it's resemblance to an inverted cupcake. I've been fortunate to work with a few cupcake capped nurses and they were all really good nurses. Maybe that accounts for my fondness of this type of cap.

I don't know if this is a valid observation, but I've always thought of the cupcake style cap as an East cost phenomenon. Lots of cupcakes to be found in New England, but moving Westward, the folded flat (my crude term) seems to take over. I actually wrote a post about the way a flat square of Argo starched cotton was folded into a cap at our school (nurses cap folding - an ancient tutorial.)  The unique aspect of our folded flat was that it had to be worn parallel to the face or you were in for a heap of demerits. Yes, at uniform inspections our caps were measured at the top corner and bottom to make certain that it was parallel to your face. 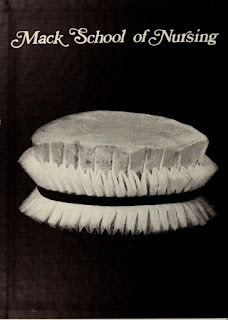 There were various permutations of the cupcake cap ranging from the beautiful domed Bellvue cupcake to a flat sort of pancake style cupcake. Some schools even got fancy and added a black band to the cupcake. This frilly banded cupcake is really over the top. A nurse wearing a cap like this really commanded respect and was probably quick to put a foolish folded flat capped nurse in her place. I don't think I would put up much of an argument with a nurse wearing a banded cupcake.

It looks like this black band even has an elastic-like quality to it that would hold it in place. Often times with the folded flat cap nurses  would have to add a thin bead of Surgiube or Lubafax to the band to hold it in place. This trick worked every time.

One of problems encountered with the cupcake was  how to secure it to your head. White bobby pins worked well with the folded flat, but would distort the symmetry of a cupcake cap.  Bobby pins were really noticeable on the cupcake cap and  messed up the aesthetics. The short rimmed cupcakes ( actually pancakes) even lacked enough surface area for the bobby pin. 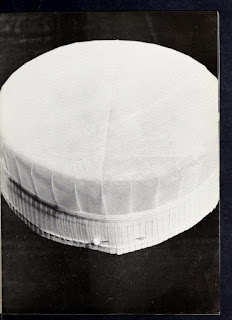 We were never permitted to wear nursing caps unless on duty in the hospital. This required wearers of the folded flat caps to use unwieldy cap carriers. Cap carriers always littered the break rooms and sometimes would provoke an argument if you picked up the wrong one. Nursing caps frequently were heavily scented with cigarette smoke and other unsavory hospital smells. It was not prudent to go around sniffing caps or cap carriers.

Cup cakes often had the advantage over folded flats when it came to these transport issues. Some of the less fancy ones could be flattened and easily carried without the use of a cap carrier.

It seems to me like about the mid 1970's nurses started looking for reasons to abandon their caps. Orthopedic nurses claimed that caps were always in the way because of overhead traction apparatus, ICU nurses complained about ceiling mounted IV racks, and psych nurses claimed that caps intimidated their patients. By the mid 1980's cap wearing was made optional at many facilities and in the mid 90's, I think caps disappeared for good. I think what really did the cap in was an attitude issue on the part of nurses. Diploma nurses were socialized into believing the cap was the ultimate reward a nurse could receive; more important than even fiscal consideration. This was a real boon to hospital administrators with payroll cost. Caps were relatively cheap. Nurses began to realize a cap did not really help them buy food or housing and began receiving fair wages. Young nurses thought caps represented a servitude mentality which they probably did.  A whippersnapperrn once summed up nurses caps nicely saying "respect the nurse cap , heck yes - wear a nurses cap, hell no."

Posted by Oldfoolrn at 5:49 PM