As a scrub nurse, I have had many memorable surgical experiences: there was the trauma patient hemorrhaging so fast that you could hear it, bubbling chest wounds,  loading 2 Raney clips simultaneously with the same hand,  and  that strange extraterrestrial-like object hanging from the ceiling in our oldest and unused operating room.

The old abandoned  operating room at the end of the hall contained some interesting bits of surgical history. There was an observation gallery that was accessed by climbing an old wooden ladder. It was so well used that the rungs were worn down by the footsteps of budding  young surgeons learning their trade. If I had been around back then, I might have waited until they were all situated and surreptitiously removed it.

What really got  my attention was that extraterrestrial appearing object suspended from the ceiling and hovering above that old operating table. It was surrounded by 4 mirrors and I deduced that their purpose was to frighten alien visitors back to the solar system they came from. When they emerged from that Sputnik like device in the center, one look in the mirrors would frighten them so badly that they would return to their place of origin.

My next thought was that the mirrors were to give the budding surgeons in the observation gallery a better view of the surgical procedure. Maybe they could reflect a view from deep inside a wound. The sight lines were a bit off so I quickly dismissed that theory. 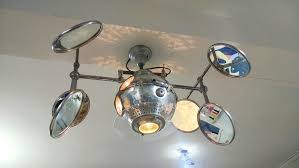 A bit later, I learned that Dr.  Slambow, my general surgeon hero, had actually performed surgery in the 1940's using this mysterious object for illumination. It was an Operay surgical light manufactured by The Ohio Chemical and Manufacturing company in the mid 1930's. This company is still in business as Ohio Air which manufactures suction and flow meter equipment.

Old time operating theaters or galleries such as the amphitheater at the Pennsylvania Hospital or the Ether Dome in Boston were illuminated solely by soft, available light delivered via skylights. This greatly limited the times suitable for surgery. When the sun went down, the surgeon was out of luck. This soft, diffuse natural light was thought to be the ideal illumination for surgery. The Operay was designed to be a shadowless light source to replicate the natural lighting in old operating theaters.

The Operay was a very complex device for delivering this shadowless light. The most fascinating part of this system was the central sputnik-like light source. This component of the Operay was referred to as an orb, sphere, Christmas ornament or light ball. It contained two incandescent light bulbs each drawing 200 watts. There were 6 concave mirrors reflecting the light through 6 or 7 convex lenses on the periphery of the orb. Later models of the Operay replaced the lens on the top of the sphere with another light bulb in attempt to produce more light. The light was then reflected off the four remote mirrors and finally reached the operative field. I don't recall that much from high school physics, but I do remember the inverse square law regarding light. Double the distance the light travels and  you reduce the intensity big time. The Operay was really a fancy way to reduce lighting intensity. Not a good thing in the operating room.

There was a knob extending down from the Operay between the counterweight and the light ball that was connected to a gearbox controlling the rotation of the orb. This served to focus and direct the shadowless light to the operative field. This orb control knob was fascinating. The gears were as smooth as silk and it was a thrill to see those rays of light do their dance with such little twisting of the control knob. It made me feel like a cat with a big ball of yarn. Whenever  I had time between cases, that old abandonded operating room and the spectacular Operay beckoned me with their siren call. At least Dr. Slambow always knew where to find me.

From a patient's perspective lying on the table, an Operay was probably a haunting sight. Those old time anesthetics were famous for their emergence reactions and I suspect the Operay hovering overhead added fuel to the fire. That orb looked like it was straight from Dr. Frankenstein's laboratory. Imagine lying on the table gazing up at that orb surrounded by those ominous mirrors and the anesthetist lowering an ether frame over your nose and mouth. The instrument nurse brandishing flesh shearing instruments and lurking in the background did little to reassure the hapless patient. Those heavy duty restraint belts on old operating tables were there for a good reason.


I doubt they had sterile light handles for the surgeon to make his own adjustments to the Operay. I would have loved to hear the old time surgeon's light directing commands to the hapless circulating nurse or hustle nurse in the vernacular of the day. "Move that 2nd mirror so it shines some light on the gall bladder not the liver... I said gall bladder you idiot." The adjusting knob is visible just to the left of  the solid copper counterweight on the far right.

Despite the complexity and intricate nature of the Operay, the .end result was disappointing. Surgeons quickly learned that shadowless lighting was not all it was cracked up to be. Shadows are necessary for depth perception and delineation of textures in different tissues. It is also more important to have the lighting illuminate deep into wounds rather than worry about shadows. The Operay did not put out much light and even adding an additional bulb to the top of the sphere did not help. By the end of  WWII the Operay was obsolete.


The mechanical complexity, specialized use, and rarity of  Operay lights spark an acquisition urge in some and inspire collectability. I have seen Operays listed on Ebay for $3000 or more. Somewhere amongst my nursing junk pile archives I managed to save a burned out lightbulb from our old Operay. It was unusual because it was not frosted and had a visible filament. There was no wattage listed on the bulb, but it was mysteriously  labeled a 212 light bulb.

There were a number of complex solutions to medical problems that did not work out. I'm thinking of those complex gyne instruments for external pelvic measurements to assess pregnancies or the use of hyperbaric chambers for heart surgeries. Lutheran General Hospital in Park Ridge, Illinois designed a hydraulically driven heart lung machine for use in their hyperbaric chamber. Another widespread use of a complex device was the IPPB for all decade of the 1970's.  Complexity does not always translate to improvement.

Posted by Oldfoolrn at 6:29 PM

Email ThisBlogThis!Share to TwitterShare to FacebookShare to Pinterest
Labels: Equipment