From the Anals of Anesthesia History 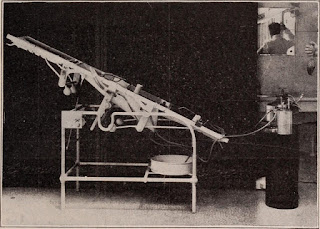 This photo was snapped in 1909 and immediately piqued my curiosity. At first glance, I guessed that this must be an old school exercise device, perhaps an inversion table or tilt table, but further investigation revealed that it's a set up for the rectal administration of ether anesthetics. This sounds like a high risk technique bordering on medical misadventure based on the flammability and mucosal irritating nature of ether. Here is what some of the physicians of the time had to say about colonic ether.

"The fact that the intestinal mucosa is especially efficient in transfer of gases to and fro from the blood, prompted the colonic administration of ether. The head of the operating table is depressed after the patient is placed on the table. The afferent rectal tube is inserted past the bulb and efferent tube. The anesthetist then opens the efferent tube to allowing bowel contents, if any to escape. The etherization should then commence by forcing the ether mixture into the bowel by pressing on the bulb until an intracolonic pressure of 20 mm Hg is obtained. Every 15 minutes the efferent tube should be opened and the cycle repeated. The colon should be inflated with oxygen after venting the superfluous ether at the conclusion of the procedure."

The prep for this anesthesia was brutal. NPO for 24 hours prior to surgery. Cleansing enemas the evening before and again in the AM prior to surgery. I was trying to deduce the rationale for the Trendelenberg (head down position) of the OR table and came up with a couple of guesses. Ether was notorious for inducing cardiac arrhythmias. An old school trick for converting arrhythmias was to place the patient in Trendelenberg and tell them to hold their breath or possibly the position helped in the retention of the ether. Who knows?

I was curious as to the nature of the ether used and learned that an ether generator was used. This was a crude vaporizer that created etherization by passing room air or oxygen through the liquid ether. Who knows what they did with the ether vapor that was vented off via the "efferent tube" but somehow I suspect that it was just vented out a window. This was a common practice many years ago and one of the reasons ORs were always on the top floor of old  hospitals.

One of the early axioms in medicine was the more primitive the procedure, the more sophisticated the lingo describing the action. That must be how the "afferent" and "efferent" rectal tubes came about. The clever old docs hijacked a term describing the autonomic nervous system and applied it to their backside buffoonery.

I don't think their notion that the intestinal mucosa is an effective means of gas exchange is accurate. "The patient is desaturating...get that rectal tube hooked up to oxygen said no one!" There is very little gas exchange along the GI tract as anyone who has erroneously intubated the esophagus knows all too well.

Although butts and gas go together like tweedle dee and tweedle dumb this procedure was inherently dangerous because ether was so flammable. Another complication was (surprise) rectal bleeding. This procedure looks more like a colitis simulator than an anesthesia agent.

Anyhow, the next time I have surgery it's going to be a spinal or regional.