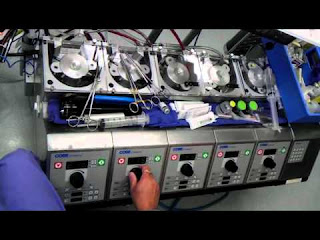 My affinity for medical devices was shattered to the core when this glimmering silver coffin-like
machine with all  it's doo dads, dials, roller pumps, and bubble machine up top was wheeled into a room. Someone even had the audacity to attach an anesthesia dispensing Halothane vaporizer into one of the circuits. It hung off the end of this beast with all of the grace of a man who had an encounter with cowboy justice. Unconsciousness was the modus operandi of this device - no anesthesia augmentation necessary. Waking up was the real challenge.

Dr. Nutsy, our one and only heart surgeon was in charge of this splendid piece of medical equipment and did he ever have clout with the purse string controlling, office sitting bigshots. The hospital had just spent $835 to have his baby air freighted fron Ohare in Chicago to Texas to install a state of the art entertainment system that consisted of an 8 track tape deck. Two speakers one on each end amplified the tunes. I shudder to think what he paid for the installation for this state of the art audio device. We were too blown away by the air freight charge to even think about installation fees. This was a surgeon who got what he wanted. Few hospitals did open heart surgery  and retaining Dr. Nutsy was essential to maintaining bragging rights.

Early open heart surgery was not pretty. Dr. Nutsy once lost 8 patients in a row and the nurses that lost  big money betting on number 9 were consoled by the fact the young patient was only 7 years old and had an easily repaired septal defect. I remember how delighted we all were when his young patient did so well that she walked out of the hospital a week later. Even a surgeon with borderline surgical skills gets lucky now and then.

The heart room had a dedicated team so I never had the pleasure of working with Dr. Nutsy. His shovel like lunch.hooks hands wielding sharp metal objects, some them under pneumatic power near a beating human heart looked like something out of a horror movie. All that blood coursing about to and fro in clear tubing added to the creepy ambience. Dr. Nutsy had mutton chop like bushy  sideburns and it used to creep me out watching dandruff particles flake off and lazily float like snowflakes into the surgical site. His patients survivors did have low infection rates so this must have been aseptic dandruff if there is such a thing.

I remember one of the early myocardial revascularization techniques involved dusting the heart with talcum powder in hopes that the irritation would stimulate new circulation. Maybe Dr. Nutsy and his shedding of intraoperative dandruff was unto something.

Sometimes uninvolved and disinterested observers have a different perspective that initiates questions that the so called experts never consider. I intuitively thought that medical devices that mimicked the way human organs functioned were best. After all, early ventilators had a sigh mode where the device delivered a deep breath from time to time. That rock steady non pulsating output of a heart lung machine was nothing like the squirt - squirt output of an actual heart. Blood flowed from a heart lung machine like soft ice cream from a soft serve machine. The heart provided intermittent squirts of blood  that a trauma nurse knows all  too well from observing an arterial bleeder. How could this be?

When I asked Dr. Nasty about this, he claimed that he never thought of it and mumbled something about capillary perfusion. I was always afraid to even speak to him with his belittling demeanor.

His love of music was limited to an early 1970s pop group, The Carpenters. I clearly reollect the lovely contralto tones of Karen Carpenter flowing from the side speakers on the heart lung machine.
"We've only just begun.. We've only just begun to live, so much of life ahead... A kiss for luck and we are on our way." Unforunately the lovely music was often interrupted by lengthy bitter diatribes and outbursts from Dr. Nasty because so many times while the beat of the 8 track tape player in the perfusion machine went on, the patients heart beat did not..

I never could stand listening to the Carpenters after spending time in Dr. Nasty's heart room. When the Carpenters tunes were played I felt instant waves of fear pass through my body and visions of that 8 track tape sitting on top of that heart lung pump as the patient was wheeled out danced in my head.

Some images really stick with you.
Posted by Oldfoolrn at 6:43 PM