Open sesame or perhaps it was "open says me"  are the magical words in the tale of Ali Baba and the Forty Thieves by which the door to the robbers' cave was made to pop open. Old school scrub nurses were masters of open sesame too, and could open any OR  door with any body part excluding the upper extremities. Specific skill sets like this are in the same class as other neat tricks like learning how to recycle your own snot when scrubbed in surgery with a bad cold, but that's  a tale for another post so let's get back to the doors.

There were no self opening or side sliding  doors in old time OR's. The doors were hung on self-closing hinges that came in two different varieties. My favorite hinge type allowed the door to swing both ways and return to the closed center position by the force of gravity. The hinges had a cam mechanism that raised the heavy door about an inch or so when opened. The weight of the door dropping downward pulled it closed by the action of the hinge cam sliding down an inclined plane. This was a very reliable system because gravity never fails. 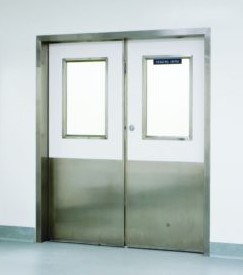 At festive Christmas celebrations these doors could also function as efficient nutcrackers. Just position the walnut or brazil nut under the door or  even in the jamb with the door wide open and quickly swing it shut. VIOLA a delicious, nutty  treat awaits, just don't try this trick when a case is in progress or you will rankle the hackles of that overly nasty supervisor named Alice. She nearly cooked my goose when a tattle tale ratted me out for cooking a turkey in an autoclave on Thanksgiving while on call.

The other type of OR door was spring loaded and would swing in  both directions and return to a closed position when the spring tension released.  The hinge springs were wound up tighter than an eight day clock when the door was pushed open  and were entwined around the  center of the mechanism. Late one night, the cacaphonus sounds of emergency surgery (hissing suction, buzzing  Bovies, chugging Airshield ventilators  and hollering surgeons) was interrupted by the loud report of a door hinge spring suddenly breaking in a most spectacular  manner. The sudden, unexpected  noise definitely resembled the report of a high powered firearm.  We nearly jumped out of our skin and the irony of this occurrence during a gunshot emergency surgery rattled our composure. Strange things happen in the middle of the night during trauma cases.

After the typical 10 minute  surgical scrub a nurse had to pass through the doors while holding their hands out from the body at chest level. A sterile consciousness dictated that the scrubbed hands touched absolutely nothing except a sterile towel after entrance to the room was accomplished.

This mandated opening the door with any body part except the hands. There were several methods to accomplish this amazing feat. My personal favorite was the "flying buttress" maneuver which involved approaching the  closed door backwards while bending over at the waist and at the proper moment exploding through the door by flexing your  backside into the closed door. I used to amuse my fellow nurses by telling them, "They don't call that thing a boomer for nothing." I have previously mentioned when discussing patient positioning that once the mid section of the body is set in motion the rest is sure to follow. It's simple physics and applies to both patients and nurses.

It was most efficient to deliver this blow on the opposite side of the hinges.  Unfortunately, this position blocked the view through the  door window which could have unfortunate consequences. One time,  I exploded through the door and my flying buttress connected with a hapless student who was observing. The circulating nurse joked that I should be charged with assault with a deadly weapon. The student was not amused and I made a mental note to carefully judge for obstructions before opening a door to prevent mishaps like this.

Another effective door opener is the Kung phooey  Fu technique. This is a good one for scrub nurses that like to show off or exert their authority. The nurse approached the door facing forward and at the correct distance popped the door open with a thundering forward kick. I would not have believed it unless I actually witnessed it, but it was possible for a scrub nurse to perform a door kick while wearing a scrub dress. Simply amazing.

The side -  swammy  sashay was perhaps the most refined and elegant of the door opening techniques. The nurse side-stepped  her way to the door and lightly pushed it open with a slight  lateral hip movement  just wide enough to slither through. Not too flashy, but effective and stealthy when the need for discretion occurred. On very long cases we would give each other breaks and sometimes the surgeon would be so engrossed in his ministrations that he was totally unaware of the scrub nurse switcheroo and that was our intention.

Once a nurse has adopted a particular door opening technique, they are usually very loyal to it. There are very few switch hitters in this business. However, I have seen some nurses alter their technique in mid-swing so to speak. The most frequent switcheroo would be an ineffective side-swammy to a full blast flying buttress. I always figured, why waste your time and simply initiate with the big guns of the flying buttress. Think big!

If I was circulating and had a good working relationship with the attending surgeon, I would keep a lookout and when he approached after his scrub,  open the door from the inside and greet him in a friendly welcoming tone of voice. A little bonhomie can go a long way in an operating room. I always tried to do the door opening/greeting routine for Dr. Slambow, but he frequently questioned my sincerity by gruffly ordering, "Cut the crap Fool...It's time to hit it." I always knew things were right with the world when he responded like that. It was going to be another day in surgical paradise.
Posted by Oldfoolrn at 6:23 PM

Email ThisBlogThis!Share to TwitterShare to FacebookShare to Pinterest
Labels: Hospital Design, In The OR