Buidling A Culture of Life - One Wound Infection at a Time 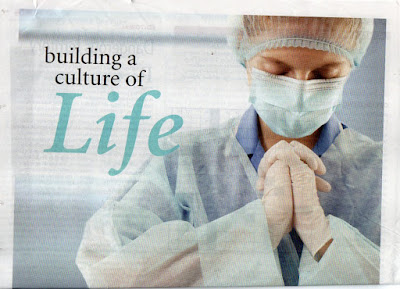 This ad really rankles my hackles and I don't know where to start with my diatribe. The self-righteous pronouncement of  life promotion is quenched by a paradoxical illustration of sepsis inducing operative attire. Her gloved hands are elevated way past the zone of accepted gown sterility. If she can avert contaminating them on the inferior margin of her mask, contact with her exposed scrub top will surely infest them with a host of eager microorganisms just itching to infect an open surgical wound. Could that gown even be called a gown? You can see through it and I suspect that  blood would run through it like water through a Keurig. Instant contamination. Her skin is visible on the left wrist below the glove. She must have put her aseptic consciousness on hold while busy building her culture of life.

And those wrinkled gloves are just waiting to get snagged on just about any  ratcheted instrument. Initially, I thought the gloves were an issue of improper  fitting, but on closer inspection, they appear to be crude exam gloves perhaps suitable for a surgeon's  Halloween costume. I'm all for hospital cost cutting, but it's just plain wrong headed thinking to skimp on surgical gloves. Despite the high-minded tone of the add copy, the  illustration would insult the intelligence of an amoeba.

My favorite OR supervisor, that red headed whirling dervish named Alice,  had a way of dealing with characters like this. The improperly gloved hands would have been smacked with a sponge ring forceps so hard an ortho consult for the practioner would be in order. The ridiculous "costume" of a gown would require more serious remediation.

This practioner of sepsis would be sequestered in the utility room with the task of scraping dried blood from every nook and craney of the sponge racks with a periosteal elevator that had been retired from service decades ago.  Just when she thought the unpleasant task was finished, Alice would roll in another sponge rack encrusted with enough dried blood that it could be used as a prop in a  Halloween house of horrors. When her clean up duties were finally  completed she would have spent an entire career in the cysto room hanging bottle after endless bottle of bladder irrigation fluid. At least when she retired her arms would rival the muscle definition of a weight lifter after elevating all those heavy glass bottles. "That'll learn ya,"  as Alice would shout with glee when one of her victims nurses had completed their penance.
Posted by Oldfoolrn at 6:10 PM