A Vintage Operating Room - Circa 1930 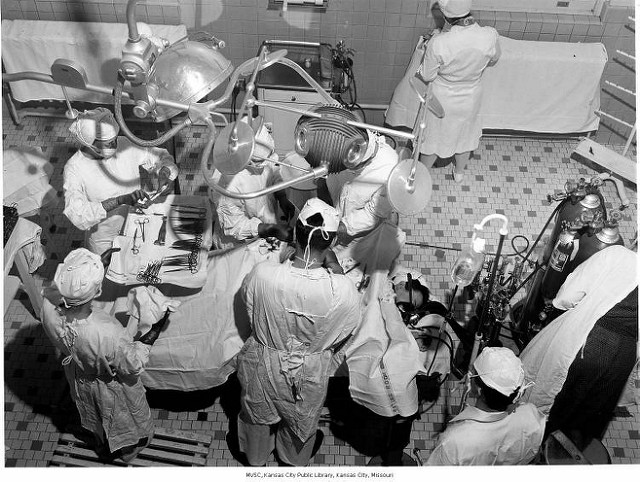 When I started this blog I envisioned it as a  museum of nursing history with an emphasis on life in the OR. After reviewing some of my previous posts,  I came to the realization that my endogenous foolishness has resulted in a blog that more accurately resembles a carnival side show. It's time to put the foolishness on the back burner and restore some credibility with a straightforward post.

So here it is; a guided tour of a 1930's operating room. Prominent in this overhead view is the unique shadowless lighting system. A very rare, explosion proof resistant black Operay. That black Sputnik-like orb contains the light sources and lenses to focus the beams of light on the reflecting mirrors arranged around the periphery. The goal: shadowless lighting.  Here is the link to an old Operay post.
tp://oldfoolrn.blogspot.com/2016/07/the-operay-1930s-operating-room-light.html

This old photo  illustrates one of the problems with Operay surgical  illumination.  Shadowless lighting failed to live up to it's hype and the folks in this OR augmented it with a floor stand pedestal spotlight which is visible in the upper left hand corner. Unlike contemporary operating rooms that are filled to the hilt with electronic equipment, Old ORs had plenty of floor space for pedestal lights that could be moved about on wheeled platforms. If a light bulb element went kaput in the middle of a case, no problem, just wheel it to the corner and bring in another light.  Pedestal mounted lights were very versatile and  tons of  fun until you stubbed your toe on that unyielding massive pedestal. OUCH.

One of the mysteries in this photo is the use of the black explosion resistant Operay in a room that could never be used with flammable anesthetics. Cyclopropane gas anesthesia was in vogue back in the 1930s, but despite the correct Operay for an explosive environment, that beautiful  ceramic tile floor could never be condutive so as to minimize static electricity. No Cyclo allowed in this room.  Ether and chloroform were popular agents and you can see the agents being delivered by mask on the laterally positioned patient. Intubation was yet to come.

Old school hospitals were very cost conscious and you can see the scrub nurses using an old wooden pallet to gain some necessary elevation. It would have been considered fiscal recklessness to splurge on a fancy metal platform when old wooden pallets could be had for nothing. Function trumps form anyday in this acient OR.

The twin scrub nurses suggest a training situation. As an eager  youngster learning the trade, I had the opportunity to scrub with a veteran nurse only once and  then I was thrown to the lions surgeons. I spent many happy evenings perusing Alexander's Care of the Patient in Surgery and mentally planning my cases for the next day, praying that I wouldn't get yelled at or forced to duck a thrown instrument.

Where is the back table in this old time OR? My favorite OR supervisor, Alice, loves yammering on about this feature of vintage  operating rooms. "We used one massive curved back table that was stocked with all of the supplies and instruments for a full day's caseload. The curve facilitated corner placement of the table with maximum usable surface area," she explained.

"Old school nurses were motivated and did not sashay in and out of the rooms like you youngsters are so fond of doing. Once that back table was stocked, we stayed put in the room until the day's caseload was finished. Between cases the circulator carefully covered the back table after the scrub nurse fetched her instruments. It was considered bad form for the scrub nurse to need an item from the back table once a case started, so we had to use our head's for something other than a hat rack."

Alice was an OCD nut and insisted her charges prepare for and conduct cases in a  Kabuki Theater like style. Everything had to be planned for and conducted exactly according to her rigid authoritarian rules which was fine until something unexpected happened. There was only one way to open an instrument set or thread a suture needle in old school ORs. The scrub nurse in the photo has her left hand under the Mayo stand. A  definite no..no according to Alice and grounds for getting a knuckle slap with a sponge ring forceps. That'll learn ya to keep both hands above the Mayo stand.

What's missing in this old OR? There are no electronic monitoring devices or piped in medical gasses. Anesthetists monitored vital signs using a precordial weighted stethoscope that was taped to the chest. An earpiece connected to a stop cock enabled toggling back and forth between the stethoscope and blood pressure cuff. Anesthesia sans any type of electronic monitoring.

These old time ORs were places to have something removed and every case was an -ectomy of one type or another far removed from the repair and replace surgery of today.
Posted by Oldfoolrn at 6:31 PM

Email ThisBlogThis!Share to TwitterShare to FacebookShare to Pinterest
Labels: Hospital Design, In The OR