Every surgical specialty has a memorable instrument from the past that inspires trepidation in modern folks; urology had the Kollman dilator, OB had the cephalotribe,  and neurosurgery had a host of ghastly  tools to fashion approaches to the brain.

The dicey part about accessing the brain is that it's covered in a very durable, hard, boney box-like structure, the skull. The dura which covers the brain lies directly beneath the skull. The trick is to get through the bone without harming the underlying dura. Just like fashioning a small round opening in a boiled egg without touching the white.

Modern pneumatic craniotomes  in use since the mid 1960's do a great job of this. There is a blunt foot on the end of that whirling dervish of a  cutiing blade that leaves the dura unscathed. It was invented  by John Nash who ironically became one of the first customers to utilize his invention. He required a craniotomy for a brain abscess shortly after marketing his device.

My favorite neurosurgeon, Dr. Oddo, just loved antique neurosurgical  instruments and had them proudly displayed in his office. I was fascinated by an unusual device for cutting thorough that bony barrier, the skull. The Souttar crainitome  consisted of   a solid 6X1 inch stainless steel post with an adjustable expanding  base, a pivoting arm that moved around the post, and a cutting wheel that resembled a plumbers pipe cutter.

Dr. Oddo was more than delighted to explain the operation of the Souttar craniotome which was invented in the early 1930's. It was designed to cut a perfect circle in the skull in whatever diameter the surgeon desired. Asking dumb questions was one of my signature moves so I asked Dr. Oddo what's wrong with a square or rectangular opening into the skull. "Intersecting lines never work in neuro surgery. If there is pressure building up under a square opening there will be greater pressure in the corners. An oval or round opening heals best and permits pressure equilibrium beneath the bone flap."  Thanks for the enlightenment Dr. Oddo, but can bone wax be used to polish a surgical instrument? Can ambulatory patients receive care at Chicago's Lying In Hospital? How normal is normal saline? Do blood gases smell funny?  Oops, those dumb questions never cease when Oldfoolrn is on the case. It's time to get back on task. 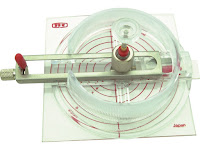 In Souttars version a burr hole was manually drilled in the center of the intended skull opening. Burr holes were drilled using a device that resembled a boring brace and the bit was attached to a clutch mechanism that ceased the rotation of the bit when it was through the bone.

The old school neurosurgeon stopped frolicking  the  cutting action just before the skull was cut through to protect the underlying dura. The final removal of the bone flap was done with a mallet and chisel.

You can count on Oldfoolrn Blog to bring you the latest in little known, esoteric, meaningless information. I Googled, Binged, and Medscaped "Souttar Craniotome" and came up dry. This post is based on memories sifted through an aging nervous system so reader beware.
Posted by Oldfoolrn at 6:10 PM