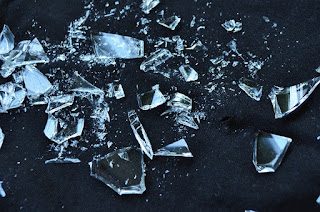 Breaking a  glass IV bottle was the stuff nightmares were made of. There were three elements to
consider with shattering  old time glass IV bottles. The glass bottle, a liter of fluid (D5W took the prize for making the biggest mess due to it's inherent stickiness,) and an air gap. The air in the bottle served to amplify the crash of the glass breaking so as to sound almost like a rifle shot. Hearing that booming "CRACK" followed by a piercing scream alerted the entire floor of the mishap and summoned a legion of gawkers for the messy clean up. It was an unwritten rule that the clean up was the sole responsibility of the unfortunate breaker of the bottle - don't even thing about calling for a janitor, oops, I mean housekeeping person. An empty Cardboard IV case was placed on the floor close to the broken glass which was gingerly pushed  into the enclosure with a portion of the box top. The procedure always reminded me of catching a piranha  with your bare hands, a slippery mess with a laceration or bite close at hand.

Glass IV bottles were at risk for breakage because their girth made them difficult to grasp. When CDs were designed one of the goals to make them easy to handle. Designers of glass IV bottles were not concerned with ergonomics and the diameter of the glass  container expanded to fit the volume of the fluid. Thank heaven there were no 2 liter  IV bottles.

Another common mechanism of bottle breaking was undershooting the hanging notch on the IV pole. That thin wire hanger was difficult to see especially under bad lighting conditions and many an old nurse thought the bottle was about to nest safely on the pole only to have it come crashing down. A good luck/bad luck conundrum occurred when the rapidly descending bottle came crashing down on the nurse's foot. The bottle, cushioned by the nurse's toes remained intact but hobbled the hapless nurse. Maybe nurses should have worn steel toe shoes like heavy construction workers.

Miss Bruiser, my all time favorite nursing instructor had a favorite tactic for dealing with bottle breaking students. After haranguing and berating the student during the clean up she insisted the clumsy student carry a glass IV bottle with them for 24 hours. A unique combination of public humiliation and learning how to perform daily activities with an ever present glass IV bottle was an excellent deterrent.

Finally the rolly polly crash and break was another way to reduce the glass bottles to glistening shards.  Everyone was acutely aware that there was only one safe position for a glass IV bottle and that was vertical. Inadvertently setting a glass bottle on it's side resulted in it rolling away and crashing at some distance from the nurse. Nurses frequently turned the bottle to this vulnerable position to apply a timing strip or write a note on the bottle label. This unfortunate event almost always occurred at times of great stress when there was an unforeseen complication or unexpected event. An acute hypoglycemic crisis required an immediate IV and if that gigantic ampule of D50 rolled and shattered it was like having a bull in an IHOP restaurant with all those syrup bottles; sticky, gooey syrupy stuff everywhere.

Despite the potential for breaking, nurses hated to see those glass IV bottles morph into those silly looking flexible plastic bags. If the complaints and derisive comments about heavy duty enema cans being replaced by flimsy bags was bad, the ill will directed toward IV bags was even worse. Veteran nurses used to joke  ( I hope it was in jest)  about using those newfangled flexible plastic IV bags for enemas because that was about all they were suited for.
Posted by Oldfoolrn at 6:18 PM