What Was the Most Useless Old School Diagnostic Test?

The first notion that popped into my foolish mind was the "spit test" for digitalis toxicity. The patient was asked to produce about 5 cc  of pure saliva which was tested for potassium levels. The notion being that a high level of potassium excreted in the saliva was indicative of toxicity. Everyone had a different threshold to spill potassium in their saliva and hypokalemic patients could be digitalis toxic and have a "normal" potassium level on their test. This procedure was relatively benign in that it seldom led to further testing and had it's lighter side involving nurses providing graphic descriptions to befuddled patients about the difference between saliva and sputum.

The Histamine stimulation test for determination of gastric acid output was one of the chief  villains when it came to useless or even downright harmful diagnostic tests. The test was widespread in that just about anyone experiencing epigastric pain was a candidate and it frequently got the patient placed on the medical hamster wheel of cascading invasive tests all of which led to virtually ineffective treatment.

The underlying principle of peptic ulcer  treatment was the Schwartz dictum (no acid-no-ulcer.) This was accomplished by the Sippee diet which consisted of hourly swigs of 1/2 and 1/2 which was kept iced in a bath basin at he bedside. Copious consumption of antacids was also encouraged. This treatment did not provide a long term cure, but for some provided symptomatic short term relief. Peptic ulcer treatment improved dramatically when Australian researchers showed the root cause of the disease was bacterial. This insight was the gateway to effective treatment for peptic ulcers. 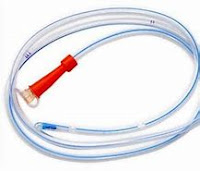 The test was sheer misery for patients. Step "A" involved inserting a naso-gastric tube regardless of the difficulty passing it. Miss Bruiser, my favorite nursing instructor, "assisted" novice nursing students perform this procedure by forcing the hapless patient to  take sips of water from a glass as she forced  the liquid past their  lips all the while barking, "SWALLOW..SWALLOW."  She often explained to the student nurse that inserting an NG tube was just like fishing; just wait until you get a  bite  swallow and ram rod that slippery cylindrical hose home to the patients eagerly awaiting stomach.  "The patient will have to swallow eventually, just like the fish have to bite."  Meanwhile the patient was coughing and spraying the forced water right back in the direction of Miss Bruiser's face. Karma in action.

After the position of the NG tube was verified by auscultation; I always wrote that exact line in my nurse's notes because Miss Bruiser gave brownie points to students that used esoteric medical terminology.  Most of my fellow students simply noted that the position

of the tube was checked. Next on the agenda for this procedure was an uncomfortable painful injection of histamine that burned like a blow torch and resulted in a sore arm for at least 5 days.  This stimulated acid production in the stomach just as pouring gasoline on a fire exacerbates the blaze. Headache, dizziness, flushed face, and profuse sweating were frequent side effects of the injection.

The last component of the test is where the rubber meets the road. At 30 minute intervals X3  a gigantic piston syringe is coupled to the NG tube and as much gastric acid as the law allows is sucked  aspirated and placed in a carefully marked specimen cup. Patients often complained that it felt their stomach was being pulled out through their nose. My stomach used to churn and ache just witnessing such an ordeal and it was a cause  for rejoicing when those slippery specimen cups were on their way to the lab for analysis..

When learning about the cause of peptic ulcers the "ulcer personality" was stressed and was described as a person experiencing resentment, anxiety, and anger. I never believed these traits were the cause of ulcers. I always suspected the ineffective medical interventions of the day and the sheer misery quotient of the diagnostic testing caused much of the ill will and bad feelings on behalf of the patients. It's amazing how long  such an inappropriate treatment can remain in place and become accepted practice. Of course such foolishness would never happen in the healthcare environment of today!
Posted by Oldfoolrn at 6:37 PM