"Don't Worry, I Was an ARMY Ranger"

My obsession with surgical instruments and fondness of  esoteric operating room tales are not appreciated by everyone, so it's time for something completely different - a true story from that long term VA  psychiatric hospital, Downey. 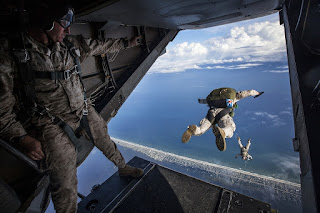 It was nearing time for my annual proficiency review and I was beginning to feel nervous with an impending sense of doom. One of the key metrics in the evaluation other than restraint hours was avoiding patient elopements. The restraint hours could be managed with some clever slight of hand when filing reports and records. Maybe that's why all the nurses winked and called records of locked restraint hours the "funny papers." The favorite maneuver was to apply locked restraints and leave one of the locks open.  They were just as effective but technically not full locked leathers.

Mr. Dunkfeather who had been recently upgraded from head attendant to nursing assistant looked grim as he approached the nursing station. He had just completed the 2200 hour  patient count and came up one man short. "Fool, Hughes is not on the ward for patient count," he related. My first reaction was denial,  reasoning that it was impossible to elope from a locked ward. There were 3 sets of locked doors between patients and the outside world. Things like this never happened.

I quickly did a search of all the hiding places; shower curtains, under beds, and even inside lockers. Hughes had simply vanished. Next on the agenda was a review of the records. Whew..at least he was a voluntary patient. If a committed patient was lost, the notification process was quite onerous and time consuming and involved official notification to administration and law enforcement personnel. All that was required of a voluntary elopement was the completion of a 10-2633 form which was reviewed the next day at a treatment team meeting.

When I unlocked the heavily grated main entrance door to leave at the end of my shift a surprise greeted me. It was Hughes bounding up the front steps with an ear to ear grin. I must have looked like I had seen a ghost. "How in the world did you get out of there?" I stammered in disbelief.

"Don't worry, I was an ARMY Ranger and was trained how to jump. There is a gap in the bars covering the back bathroom window so I squeezed out and jumped. I was just repeating an old Ranger training exercise. Now that I know my skills are intact everything is going to be OK."

Hughes was obviously uninjured but the window he jumped from was on the second floor  of Building 66 which was the equivalent to a 3rd floor level because the basement was elevated on that side of the building. He showed me the gap between the iron bars  and further explained some of the techniques used when landing from a jump. He seemed amused by my interest and added that he would be happy to teach me some of his jumping skills. Not tonight I muttered before stopping at the nurse's station and discarding my elopement reports. No harm..No foul.
Posted by Oldfoolrn at 7:16 AM