The function of a surgical instrument is usually obvious; retractors retract, clamps clamp, cutting instruments cut and forceps hold things. I made a comment about a lovely grooved director instrument on Instagram and was asked, "What is that thing used for?"  When I was a novice scrub nurse grooved directors were widely called for and  used for a hodge-podge of probing, directing of suture and guides for  cutting tasks. As I approached retirement they  remained in the instrument tray on the back table and finally disappeared forever. 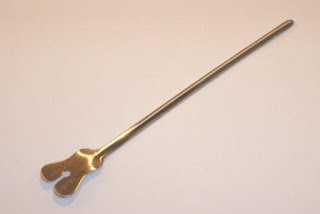 Grooved directors always reminded me of Mickey Mouse. The end of the instrument with the ears was called the spoon or saddle. Dr. Slambow, my favorite general surgeon liked to sing Home on the Range while working so I took a  liking to the "saddle" reference. The curved shaft extending from the saddle was called the shank.

Surgeons are big fans of devices that restrict their view to the work at hand and use drapes and devices like grooved directors to frame their field just like a movie director with  a view finder.  The tiny, circular opening in the saddle was often centered over the opening of a duct or anything else that might require exploring with a probe. The grooved director was positioned at a right angle to the wound or duct and served as a fulcrum for manipulating the probing. Imaging techniques were few and far between in days past. Probes  were a crude but effective tool for exploring. When ducts and wound tracts could be evaluated without probes grooved directors fell out of use as guides for probes.

Grooved directors could also be used as protective shielding tools. The shaft had a horseshoe or curved profile and could be placed over nerves, arteries or anything else that should not be cut. The rare illustration of a grooved director in action shows it placed over a tendon while cutting from above. The surgeon must be an early specialist as general surgeons almost never hold a scalpel like a pencil. He must really be an old-timer. Is he actually performing surgery bare handed? That lovely scalpel is way before my time. BD disposable scalpel blades have been in use since the 1950s. 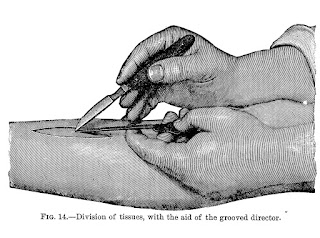 Surgical residents are very familiar with 3 rules of survival:  eat when you can, sleep when you can, and don't monkey with the pancreas. Grooved directors were frequently used to guide suture away from the pancreas when working on the duodenum. They functioned much like a clothes line prop with the suture strand guided by the groove in the spoon away from the friable pancreas. If left alone, suture assumes a caternary  curve and the grooved director straightened things out.

I managed to put my blowhard nature on the back burner and seek outside input for grooved director information. When I Googled the instrument  I discovered uses like a pediatric tongue depressor or elevator during surgery on the frenulum. That's a new one on me.

I emailed Dr. Sid Schwab from Surgeonsblog fame and he exclaimed, "That's a trip down memory lane!" He used the instrument once or twice on pancreatic duct procedures. Dr. Skeptical Scalpel (on my blog roll) almost never used a grooved director.

Grooved directors fell from disuse like open drop ether anesthesia and Operay lighting systems. Almost everything has a shelf life and I often what modern devices will be extinct in 30 years. Maybe the grossly overpriced, unproven surgical robots?
Posted by Oldfoolrn at 6:50 AM