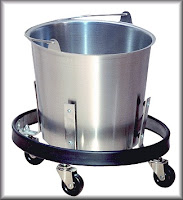 My recent visit to Pennsylvania Dutch Country rebooted a long dormant memory of an unfortunate incident  with that wheeled dervish, an operating room kick bucket. The Amish eschew internal combustion engine powered transportation devices in favor of things like foot powered scooters. One foot remains firmly planted on the scooter platform while the opposite lower extremity propels the device with intermittent kicking motions. As we shall see, that mode of propulsion is not exclusive to Amish scooters.

Kick buckets in the OR are similar to Amish scooters in that they share the ability to move through space on wheels and are about the same size. My tale begins as another long case comes to a conclusion and I am involved in the usual post-op prattle with Janess, the exhausted scrub nurse. As she descended from the artfully OFRN designed scrub nurse  platform her foot landed smack dab in the middle of a carelessly positioned  kick bucket. The wide opening at the bucket top guided her foot into the much smaller base firmly entrapping and immobilizing her leg in the contraption. Luckily the bloody sponges had been removed from the kick bucket or the situation could have been rather messy.

The ensuing commotion soon aroused the attention of our hypervigilant supervisor, Alice, who added to the cacophony with one of her bitter diatribes. "Look what you've done now you clumsy little goofus. I've got a mind to teach you a lesson that you won't soon forget," shrieked Alice.

Janess was now a hostage of her sympathetic nervous system which activated the flight or fight instinct. Alice was a contentious character with a military background so the only viable option was flight without further ado. With one foot entrapped in the confining but mobile kick bucket, Janees used her free extremity to propel herself through the open door with all the skill of an Amish scooter driver. Alice was not up to speed with her arthritic knees so Janess was able to open up a substantial lead and soon disappeared into the locker room. The ensuing laughter soon took the wind from Alice's sails and we all lived happily ever after...sort of. Folks that work together in stressful environments like operating rooms often transforms themselves into one big dysfunctional family. It did not seem like much fun at the time but in a strange way, these were some of the best years of my life.

Posted by Oldfoolrn at 6:52 PM