The advances in modern surgical technique always amaze me. I recently found myself fascinated by a  newfangled hemorrhoidectomy procedure. The surgeon was working with a high tech laser device and magically zapping the 'rhoids into submission while an assistant struggled to manually pry the buttocks apart with the patient flat on the table. High tech meets low tech in the totally unnecessary and difficult manual retraction for operative site exposure. Leave it to OFRNs like me to offer tips to improve the bottom line.

Old school hemorrhoid surgery was a backward, crude sort of affair. A surgical assistant grabbed the offending hemorrhoid with a Babcock and pulled it skyward. At this point Dr. Salmbow would give the command, "Meatball it!" The stretched pile was quickly tied off with a ligature and cut free with a Metzenbaum scissors. Then it was on to the next 'rhoid. At the conclusion of the case some wise guy was sure to proclaim, "We really Wrecked EM." Nurses were always advised to chuckle at a surgeon's attempts at jocularity.

Proper positioning was key to this procedure and there was none of that  struggling or manual prying of the offending, shielding nature of the site occluding  buttocks. Old school OR nurses were adept at exposing just about any body part with the use of sandbags, rolled washcloths or towels, airplane belts,  and  3 inch J&J adhesive tape. The secret ingredient was tincture of benzoin which was the old time equivalent of modern super glue. 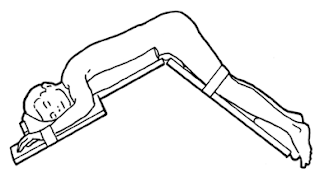 Hemorrhoid surgery began by placing the patient in the jack knife position as shown above. The buttocks were then liberally painted with tincture of benzoin which usually brought out the Picasso in me although  I suspect he never had a palette like this. The benzoin served to affix the adhesive tape aggressively to the skin. Next a 3 inch by 2 foot section of adhesive tape was applied to the buttock and then pulled laterally like a piece of taffy. When the "pull" was sufficient the opposite end was wrapped around the under table rails of the OR table. An additional strip of tape could be applied at a right angle to  this main "spreader" for oversize patients. The end result; a perfectly exposed operative site.

Abrupt removal of tincture of benzoin secured adhesive tape frequently enhanced a patient's emergence from general anesthesia. That stuff was a real challenge to separate from the skin in a civilized manner.

I often thought that the Preparation H folks should advertise by showing snippets of forcible hemorrhoid removal. Hemorrhoid surgeries were enough to convince me of the value of topical treatments.

Posted by Oldfoolrn at 1:24 PM

Email ThisBlogThis!Share to TwitterShare to FacebookShare to Pinterest
Labels: In The OR, Procedures