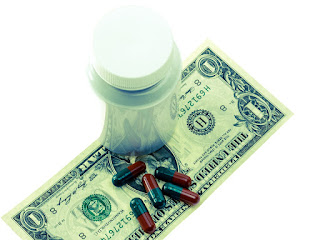 Forty years ago physicians would have never considered denuding fellow doctors and nurses of their limited financial resources to pay for health care. Any doctor would see any colleague without money changing hands. Physicians were apex predators in the hospital food chain and they always got what they wanted without question.

One of the ideas behind professional courtesy was to prevent doctors from treating their own family members. Physicians and surgeons tend to overthink and overdo things when caring for close relatives. Laproscopic minimally invasive surgery was in the distant future and overdoing procedures like radical mastectomies or laryngectomies was not a pretty picture. Professional courtesy spared fellow health workers from lots more than financial pain. It was a grand idea that was a tradition for many years.

I worked with the internationally known ENT surgeon, Maurice Cottle, who thought virtually anyone could benefit from a "Cottle Nose." The purported gas exchange improvement by breathing through remodeled nostrils was  claimed to improve everything from longevity to energy levels  Student nurses were among his favorite subjects  patients and many took him up for the free, albeit painful rhinoplasty which of course was done as a professional courtesy. I treasured my native proboscis and politely declined his frequent offers for cost free, fragile nasal bone crunching surgery. When scrubbed with him I made darn sure my mask was covering my nose completely so as to not give him any bright  ideas. There was something about hearing those loud snap, crackle, pop noises as he plied his trade on a wide awake, locally anesthetized patient that gave me goose bumps. This was not for me.

A triangular alliance of administrative busy bodies, health insurance companies, and governmental regulation put a halt to the long standing tradition of  professional courtesy. Physicians now had to kowtow to a host of  policy makers outside the medical world as managed care became the norm. Healthcare became technology proficient, but empathetically deficient. Balance sheets and quarterly reports were the metric that defined hospitals. Professional courtesy was gone for good as business minded bean counters controlled the medical landscape.

Some old time docs did not go quietly into the night when it came time to abandon professional courtesy. When an old school surgeon like Dr. Slambow received a medical bill for banding a series of uncomfortable internal hemorrhoids he went ballistic with the poor young lady from the billing office. I only heard one side of the memorable  phone conversation argument, but the snippets were permanently engraved in my long term memory including  phrases like: "I demand professional courtesy - I'll bend over and extricate that overpriced elastic ligature and  mail it back to you C.O.D.- if I ever see you on the OR table." I don't know if his medical bill was forgiven, but the hapless young lady from billing received an earful.

There have been many attempts to reform medical billing such as the ill fated Medicare DRG schedule where hospitals received fixed amounts for procedures. Maybe it's time to go one step further and take a lesson from attorneys with their contingency fees. Simply place all the funds paid to correct a health problem in a reserve fund. When a physician accomplishes the final cure, he gets the whole pot. This would incentivize finding a cure rather than finance a medical goose chase with pricey diagnostic studies that produced minimal result. Now that's something to think about.

Posted by Oldfoolrn at 8:49 AM