Vintage diploma nursing schools had rigid, authoritarian  rules for just about everything  that could be construed as fun. From restrictions on outside visitors, especially men, to strict study hours, all recreational outlets were meticulously managed with onerous regulation. The rules regarding alcoholic beverages were especially strict and came from the hallowed chambers of  The Hospital  Board of Trustees. This mysterious and often cited governing body was a force to be reckoned with because just one measly slip up of their regulations could get you expelled from the nursing program.

According to the esteemed board, alcohol was the ultimate in forbidden fruit, especially for stressed out and underaged nursing students. The notion that imbibing in the magical elixir of alcoholic drink was wrong, made it all the more appealing. Diploma nursing students were in the same boat as Eve in the Garden of Eden.

By the time nursing specialties: pediatrics, psych, and obstetrics, rolled around, nursing students were feeling the pressure of their chosen vocation. I was going to say chosen profession, but we were brain washed into submission and nobody really believed we were worthy of such a lofty title. I'm just a nurse was our mantra. Doctors were professional-nurses were not.

All nursing specialties were difficult and stressful. Cures for seriously ill children were few and far between. Leukemia of any variety was a death sentence. Our clinical psych experience was on the back ward of a state hospital and it was your lucky day if your patient wasn't homicidal. I don't know which was more trying on your soul,  psych or pediatrics. It was a toss-up.

Obstetrics was different, especially post partum where the exuberance of young mothers was uplifting. Our time in OB was rotated in monthly intervals through delivery room, nursery, and post partum. Everyone had their particular favorite, but delivery room duty was the highlight of just about any young student  nurse's  training. The miracle of birth was something that stayed with you and served as an antidote to all the pain and suffering in the rest of the hospital. Birth and death were the ultimate Yin/Yang experience.

The delivery room had another up side. Stashed right next to vials of silver nitrate which was used prophylactically in  babies' eyes to prevent blindness from contact with gonorrhea was a stack of blank birth certificates. 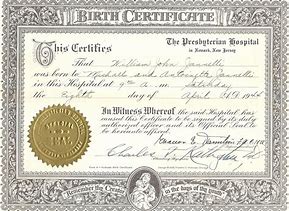 The unwritten rule was that each student nurse was entitled to one blank birth certificate at the conclusion of their delivery room rotation. Students treasured documents from their various specialty rotations and I still have a plundered birth certificate along with a sponge count record from the OR and a restraint and seclusion record from psych.

I first learned what could be done with a blank birth certificate from one of my fellow students who had been released from Cook County School of Nursing as being unsuited for the practice of nursing. That "unsuited" business was a catch all phrase that covered a multitude of sins and was a step up from academic failure because some of these students were able to transfer to another diploma nursing program after "maturing." Transfer students were a valuable resource when it came to surviving nursing school because they knew many of subtle ins and outs of getting through the madness of three years of torture.

Light fingered nursing students knew exactly what to do with a poached birth certificate. "All you have to do is fill in your own name with a birthdate of more than 21 years ago and the document becomes your ticket to freedom from the evil clutches of the sanctimonious "dry" hospital environs," explained one of these wise transfer students. Time to unleash the libations.

Barkeepers found the neighborhoods surrounding hospitals as fertile ground for their trade. There was no shortage of stressed out workers that had pay checks to support their bar tabs. These taverns often had clever names like "Recovery Room" or "Barborygmi." The bar of choice near our hospital was "Ratzos" and the barkeep would just wink and pour when presented with a birth certificate with freshly inked infant footprints. This little charade had been going on for a very long time and was one of the dirty little secrets of old school diploma schools. Cheers! as Sue  would say.
Posted by Oldfoolrn at 6:48 PM