Downey V.A. Hospital Was The Home of Polypharmacy and Megadoses 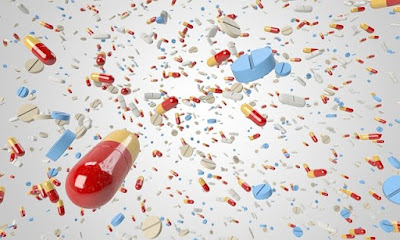 Desperate situations often produce less than optimum results. The patient population at Downey V.A. Hospital was an intractable bunch, tortured by some of the most severe psychopathology known to man. My first time passing medications was a real shocker as one pour soul was ordered 2000mg. of the potent major tranquilizer, Thorazine. Nursing school pharmacology taught me that a usual dose was 75-200mg of Thorazine. A ten fold dosage of 2 gms. was out of the ball park.

Another disturbing trend involved patients dosed with more than one major tranquilizer with some dispensed as many as four. When the V.A. administration discouraged megadoses, polyharmacy was haphazardly substituted. I don't know which practice was worse in fueling disabling side effects like tardive dyskinesia, polypharmacy or megadoses.

When I brought this up to our ward physician, Elihu Howland MD, he agreed that it was a less than desirable situation  and suggested that I do a study enumerating the problem and he would see what he could do. Good luck were his parting words which were uttered in a less than sincere manner.

I eagerly went to work and came up with the following.

There are a significant number of patients at Downey receiving  more than one antipsychotic drug or a witch's brew combination of these neuroleptics. Here on Building 66AB I found a patient receiving three different antipsychotic drugs with a PRN order for a fourth neuroleptic agent. This much chemical restraint could be as disabling as the underlying illness.

Many studies evaluating  polypharmacy under controlled conditions demonstrate that there is no effectiveness over monotherapy. There really is no basis in fact for the existence of polypharmacy as a treatment method nor empirical evidence for its continued use as an effective treatment modality. Additionally, polypharmacy creates an added risk, even a fatal outcome, from a combination of drugs with mutually additive effects. With polypharmacy it is nearly impossible to delineate which specific drug is the culprit inducing untoward side  effects.  Many articles conclude that single drugs are the treatment of choice over polypharmacy.

Furthurmore, a recent review clearly shows that  we have a number of patients on extremely high dosages of antipsychotics. Megadoses   seem related to poly pharmacy in that one poor option is often substituted for the other. When megadoses are discouraged, polypharmacy soon fills the void.

Megadoses indicate  we have a large group of chronic patients who have been receiving a very high dose for a long period of time and whose mental status has stabilized, yet no attempt has been made to reduce their dosage to the lowest effective maintenance level. This maintenance dosage should be as low as suitable for retaining therapeutic progress. Dosage should be gradually titrated down to avoid a sudden emergence of symptoms.

The notion of lowering doses is especially important when megadoses or high doses are ordered. The patient's symptoms , drug history, and general physical condition should be considered when the risk of megadoses is evaluated. The occurrence of side effects must be balanced the benefits in the chronic patient who continues to present psychotic symptoms endangering himself or nursing personnel.

Once control of target symptoms has achieved, the dosage must be be adjusted downward as most all patients could be maintained on a lower dosage level.

Perhaps we should start by eliminating polypharmacy and then carefully titrating down on some of the megadoses.

My frustrations working at Downey reached a boiling point a few months later when my head nurse recommended me for a grade promotion, but  it was rejected by the personnel office because I was 4 days shy of the time required in grade for promotion, but never fear, I could apply again next year.

I resigned from Downey V.A. on May 21, 1976 after working there 1 year, 5 months, and 28 days. It was a very long year and a half and made working in the OR seem like a walk in the park. I happily returned to my favorite stomping grounds in the O.R