It's been many moons since I've posted and I'm certain all three of my regular readers miss my foolishness as much as I miss their astute comments. When it comes down to posting on my blog or navel gazing, the later always seems to win out.

I wonder how anyone can be a regular reader of an intermittent blogger  unless they are like regularly irregular like cardiac arrhythmias,...oops there I go with more of that philosophical navel gazing stuff. Well it's time to grind out some of that patented foolishness that I'm famous for and what better place to start than with that time honored tradition of nursing awards?

I've  noted a recent plethora of nonsensical  nursing awards. Let's see there is the ever popular Daisey award and the Rubber Duckey award (No foolin'). One medical center was even handing out rocks as an award. Strange indeed. Most of the folks handing out nurse awards are hard core members of the dreaded nurse academic/administrative office sitter complex who have mastered a type of feel good jargon with absolutely no clue about what actually transpires during bedside nursing care.  Without further ado let's get into some real world nursing awards from the perspective of the tried and true bedside practitioner.

The first award is the aptly named The Golden Goose award which is given to the most whacky and useless nursing research project. I never could deduce the role of nursing research which should be aligned with biology and physiology, not psychology and sociology. What's wrong with clinical research if our goal is to improve patient care? 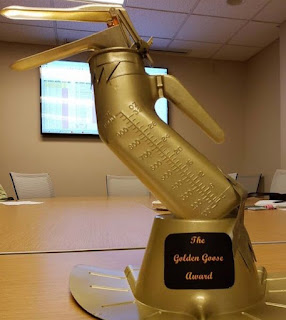 Drumroll please...the Golden Goose is awarded to a study with the impressive question; "Does photic stimulation impact hypovigilant states in the hospitalized patient?" If a research question can be easily answered, it's probably not a good one to study, and heck yes, turning on the sonic boom equivalent of lighting in a hospital room wakes patients up. We used to sneak around with great stealth using flashlights so I cannot understand where the notion of turning on the bright overhead lights came from.

I suspect it might have something to do with utilization review nurses and their never-ending quest to give patients the boot out the front door ASAP. Making the hospital environment as inhospitable as possible is a fail safe method to encourage patient egress in an expedicious manner.

My next award is aptly named "The Bermuda Triangle" and Head nurse Annie whose exploits I've detailed in a previous post is the hands down winner of this honor. Annie's fait accompli was making problems disappear into thin air. One memorable escapade involved a litigious patient falling from an allegedly defective hospital bed. The bed had been sequestered in an unused room awaiting inspection by a representative from the plaintiff's lawyer.  Annie contacted a nursing school on the other side of the city and offered them a free bed for their nursing practice lab. All they had to do was provide transportation which was arranged through a friendly police officer hanging out in the ER. In Chicago, paddy wagons are called "squadrols" and they just happened to perfectly accommodate a hospital bed.

The Marcel Marceau Award goes to one of my favorite OR colleagues, Janess, who was a strict devotee of that old school axiom that scrub nurses are better seen than heard. Every OR nurse recognizes the wrist flick gesture for a needle holder or the index, 2nd finger sign for scissors. but Janess had a few special movements that were just between us. A modified throat slashing gesture meant that our dreaded nemesis, Alice, the noisebarfing supervisor was approaching with her usual dose of venom and it was time to lay low. She also had a unique taffey pulling like gesture for a retractor that was most impressive and cemented her qualifications to receive such an esteemed honor. 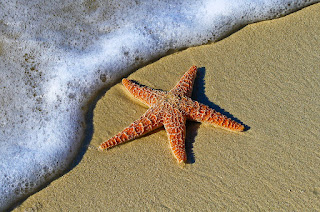 The next award is really something special and it's called the starfish award, coined after the aquatic creature's unique ability to heal on its own accord by growing new limbs. Corazon Amuro is the deserving recipient of this honor.

She was the sole survivor of a demented serial killer named Richard Speck who invaded a Chicago apartment where 9 student nurses were living. Ms. Amuro was the sole survivor and witnessed the blood bath from beneath a bed as Speck strangled, stabbed, and slashed his way through the tenement.

When asked about her recovery she replied that there was no counseling and that she sustained herself by working hard as a nurse. To her, nursing was not a means to an end. Nursing was the end itself. She took care of others and was grateful for her 1966 salary of about $4.00 an hour.

Posted by Oldfoolrn at 3:28 PM