Last Night in the OR 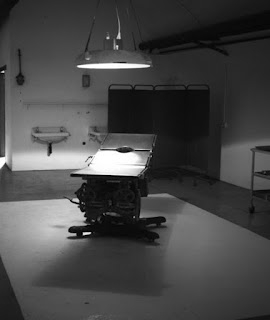 Routine scheduled surgery during daylight hours always reminded me of church services on Easter Sunday or Christmas Morning, packed with posers and pretenders making a show of strutting their stuff.  Members of the administrative office sitter bunch taking advantage of a new day to spread their feathers like a peacock on parade. The more routine the procedure, the more garish the display.
Midnight surgeries were of a far different persuasion and akin to a mid-summer church service during vacation season where only the true faithful showed up. The daytime pretenders were a totally different breed from the passionate middle of the night doers. It took a determined personality to crawl out of a warm bed on a frigid Chicago night. Owing to a phobia of authoritative administrators, a craving for an adrenalin boost or a youthful naiveite (choose whatever works for you), I'd rather crawl in for a midnight trauma than scrub for an 8AM vein stripping.
Dr. Slambow, my favorite trauma surgeon had lots to say about these late-night adventures and with his jowls dangling below his mask like a giant croissant he would often bellow. "Everyone here believes in life...so let's get this done before the daytime herd heads through the door." Sometimes he would expound at length as to why the only valid surgical intervention was for serious traumatic injury. "Things can only get better from here, but so many elective procedures invent new surgical complications. When was the last time a radical mastectomy or Whipple really cured anyone?" I could see his point. Thank heaven contemporary surgery with its repair and replace mentality has taken place of the old -ectomy for all free for all's.
Middle of night surgeries often began with a call to the honeymoon suite which was actually a repurposed vintage operating room at the end of the hall in the oldest part of the hospital. There were 2 sets of bunk beds and a wall phone midway off the floor so it could be answered by upper or lower occupants of the bunk beds. The room's light switch was permanently taped in the off position with autoclave tape, so entrants did not arouse those at rest. Call rooms like this were gender neutral and the only prerequisite for use was being bone tired.
Shenanigans were a great way to pass the time and deal with late night tensions while awaiting that phone call to hop to it. I always tried to set a positive tone for our late-night ministrations and frequently started my dialog with the prep and  a lengthy description how I just loved the radiant pinkish glow of Zephirin scrub solution.
Janess was a frequent partner on these late-night traumas and I usually bunked on the top bed while we awaited the call god's page. When the call abruptly awakened us at 2AM, a shocker awaited me. I glanced down to put my battle tested Clinics on, and lo and behold, my toenails were painted that lovely pink shade of Zephirin prep solution. Janess just grinned from the lower bunk and admitted she had been busy with nail polish while I was sound asleep.
Janess and I had a long history beginning with a procedure partner pairing in nursing school where we bloodied each others arms attempting IV starts. Like so much that happened during our on call trauma . rendezvous, Janess's presence was a paradox. She presided over emergency surgeries like an angel watching  a cemetery. She was monumental in a demure sort of manner.
The call gods could be an unpredictable lot, but everyone knew to pay close attention to the lunar calendar posted in the light just outside the door. Most nurses did not even bother to rack out when there was a full moon, action was imminent.
I never gave a thought to circadian rhythms or the pitfalls of staying hyper alert for late night surgeries when I was young and foolish. Trauma surgery was a mission and I had always sensed that I would be completely lost without it. Looking down at blood spattered shoe covers at the end of a rough trauma, I could never imagine not being a part of this mission. This was timeless.
Later in life looking down at varicose veins and arthritic knees, I came to realize I could be just as lost as a result of it. The very thing I thought I needed the most was the thing that drew the shroud of futility around my soul. Helping others while ignoring self-wellness never has a happy ending. and thankfully, most whippersnapperns are more aware of self care than the Oldfoolrns of days gone by.
Posted by Oldfoolrn at 6:46 PM