Libertarians say, "Well if people work harder they can make more money."   My mother is a nurse and I am a venture capitalist. I think no matter how great a nurse she is, she wouldn't earn a thousandth, if that, of what I can make.
Ben Horowitz
Here is a collection of pay stubs from OldfoolRN's  hey days as a nurse, which indeed would seem to bear out Ben's assertion regarding a nurse's income being less than a venture capitalist.
That Illinois stub reflects a pay level after I had been in the Operating Room for awhile. I also had some credibility in that I was a card carrying  AORN member. My starting salary was $4.24 per hour and now I was making big money at $5.35 an hour. This was really a generous salary for an RN in 1973  because suburban hospitals were only paying about $4.00 per hour.
The next pay stub is about 5 years later and I was only making $5.65 an hour working like a dog in Neuro ICU. When the shift ended I felt like an insomniac marathon runner with iron poor blood. It was a really tough job. You can readily see one of the problems here is a lack of wage progression. With more experience, the pay only increased a little bit. I hope you WhippersnapperRN'S receive better raises than I did. You have a very difficult, stressful job and deserve more progressive increases in your salary.
That last stub is from moonlighting with an agency on an oncology unit in the mid 1980's. I received the princely sum of $10.50  an hour and took home about $69.00.  Enough to pay for parking, a tank of gas, a meal, and a visit to the veterinarian for my best friend. Not bad for a day's work.
The one thing you will notice missing here is deductions for a stock option plan or a 401K retirement program. Administration perpetuated the image of nurses as angels in white and angels did not need material things like a retirement plan
The one really nice thing about a nursing income was that it was something you could count on. I was never laid off or fired. There was always work available. The Chicago Tribune had pages of help wanted ads for nurses in the Sunday paper. It was reassuring that someone wanted your services.
There were some perks to the job. If you had the misfortune of getting sick, doctors would see you as a professional courtesy and would have never thought to charge. A number of Hospitals that had a school of nursing also had  an "Alumni Room" in the hospital. This was an inpatient room reserved for the use of a graduate of their school of nursing. It was a nice room on one of the more quiet wards. It was nice to feel like someone cared for you.
I redacted some of the information from the pay stubs with a trusty #11 blade. I bet you thought scrub nurses lacked surgical skills!
﻿ 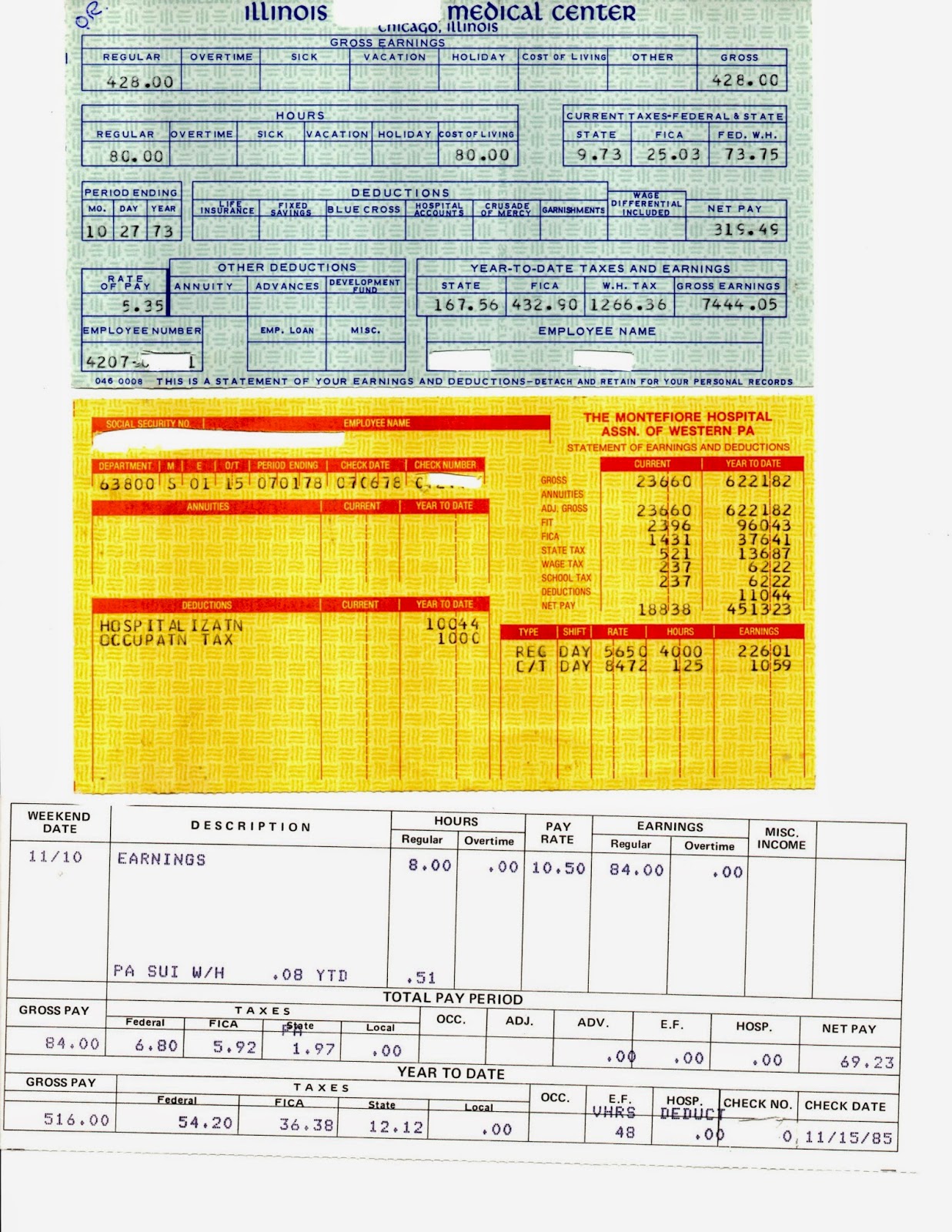 Posted by Oldfoolrn at 6:50 PM

Email ThisBlogThis!Share to TwitterShare to FacebookShare to Pinterest
Labels: Remuneration