You are in for a heap of demerits if this nursing cap  winds up off center or not parallel to your face. Do not get caught wearing this outside of the hospital. It is to be removed on the ward after your shift and carried in that especially designed cap case. I still have my cap carrier today and use it to tote around my Yorkie. You whippersnapperRN's aren't the only ones that know how to repurpose an item.

Before getting to the folding stage, the cap had to be cleaned and starched. The traditional method to launder caps at our school was to fill a bathtub about 1/2 full with water add 1 cup Borax detergent and agitate with a toilet plunger that was dedicated solely to this purpose. A rinse cycle and another toilet plunger agitation and the caps were ready for starching. Cups were starched with the Niagra brand  in a hospital bath basin and plastered to our metal headboards to dry. About 20 caps could be processed at a time using this method. I am not sure how this practice originated, but maybe it evolved out of necessity. The school laundered our uniforms, but we were responsible for our own caps.

Caps were really something special in that they were a tangible symbol of  your accomplishment. Patients could readily identify a nurse by the cap and it seemed to generate a special sort of respect. Every nurse seemed to stand taller with her cap. They really were a unique symbol in nursing history and I don't think there has been a meaningful replacement.

That black band which had to be exactly 5/8 inch across was added at a banding ceremony after completion of our junior year. It was a big deal because it meant you were almost a nurse. The bands were known to be measured at uniform inspections to insure size compliance. I have heard that the black band was added to nurses cap as a remembrance and way to mourn Florence Nightingale.

This is a scan of a mimeograph, made by an old fashioned duplicating method that used a stencil created on a ribbon-less typewriter. The stencil was rotated on a hand cranked drum to create the copy.  Careless mimeograph operators could be readily identified by their blue fingers. I didn't realize that mimeographs had archival qualities - this one is nearly 50 years old and looks like it just rolled off the machine. 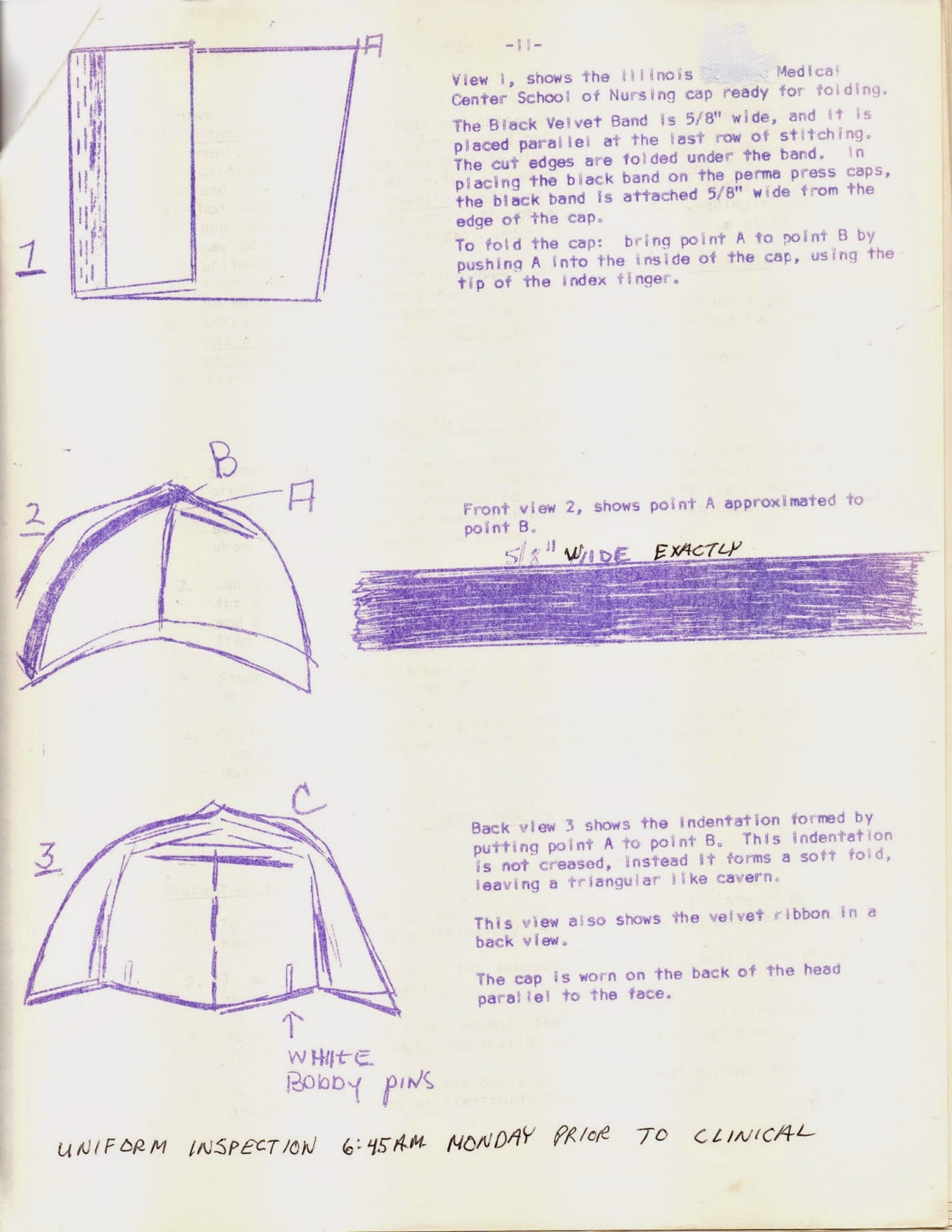 The following little ditty nicely summarizes the meaning of a nurse's cap.


The Cap
We are the "Probies"
Our piece must be said
Of our envy for the nurse
With the cap on her head.

Like an angel in heaven,
With a halo 'bout her head.
Her cap symbolizes mercy
For all sick abed.

Her duties are many,
Of  knowledge well learned
That cap upon her head?...
Yes, it's been well earned.

"Big Sisters," we're so proud
Of  your cap of white.
May we be as worthy
When we've earned that right.
-Dorothy Benner
Posted by Oldfoolrn at 10:56 AM