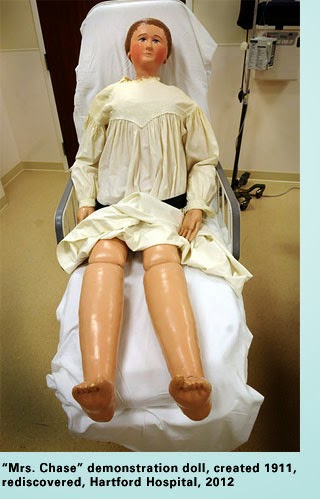 Nearly every R.N. in the US and Canada received her basic training on the Chase Hospital Doll. For over 50 years, standard equipment in the nurse training hospitals throughout the world.

This was the copy from an ad placed in the American Journal of Nursing in 1965. It also touted the availability of a male and infant doll. Our school was in the possession of only a Mrs. Chase and I have never seen the other varieties.

Mrs. Chase was named after the lady who created her as an improvement over straw filled dolls that were used to teach basic nursing at the beginning of the 20th century. She hailed from Rhode Island and had vinyl skin which was stuffed with sawdust from a nearby furniture factory. She was 5  1/2 feet  tall and weighed about 80 lbs. thanks to the strategic placement of weights. Hook and loop fasteners  like those found on a gate served to attach arms to shoulders and hips to legs. Her elbows and knees were articulated with hinges very much like those found on cabinets. She was equipped with an anus, urethra, nostrils, and a tracheotomy stoma. She also had an assortment of sites for various injections.  Curiously, her mouth was sealed shut with pursed lips, perhaps as a measure to mute her screams and complaints. The main advantages over a real patient with Mrs. Chase was her availability and the safety issue - you did not have to worry about her sciatic nerve when giving an injection.

Our Mrs. Chase looked like she came off the battlefield. Her pleasant neutral expression in stark contradiction to what she had been through at the hands of novice nurses over the years.
Her vinyl skin was brittle and dry from all the alcohol sponge baths used to simulate treatments to break a fever. Her faux anus stretched out to the size of a donut hole from all the invasive enemas. When new, Mrs Chase had a fluid reservoir that held about 2 quarts of enema solution which was drained through an abdominal port upon completion of the procedure. Ours leaked so we never had a chance to instill rectal solutions. We had to wait for the real McCoy to experience this delight.

She also had a tracheotomy stoma that we learned to clean and care for. Trach tubes had an inner and outer canula. The silver inner canula was removed and cleaned with hydrogen peroxide. Mrs. Chase also had an urethra for practice catheterization. Over the years it had been so dilated that the procedure was akin to inserting a pencil in the Holland Tunnel.

Injection techniques such as hypodermoclysis were done on Mrs. Chase  (I'm thinking about doing a post on this old hydration technique later.)  Anyhow, IM injections were also practiced and landmarking techniques which were probably the most important part of the procedure had to be mastered later. Mrs. Chase had a 2-3 inch diameter round hole chopped out of her right butt cheek at the injection site. It was filled with a replaceable foam rubber insert. You really could not miss. Just stab away to your hearts content. I remember when our instructors got their hands on a cache of expired BiCillin LA and wanted to demonstrate how much pressure it takes to inject such a viscous substance. It turned Mrs. Chase's buttock into a whitish, gooey mess, but at least there were no shrieks or complaints that were so common when giving this to a real person. This photo gives a really nice view of the injection site and at the very bottom her anus is visible along with the bilateral hooks to secure her legs. 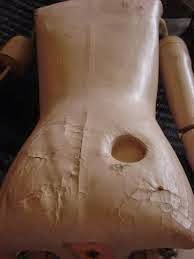 We learned all varieties of bed making with Mrs. Chase: Occupied top to bottom, Occupied side to side, Post-op with the sheets carefully fan folded on the opposite side of entry, and unoccupied. We had no fitted sheets and the corners had to be mitered at exactly 45 degree angles. There was one other bedmaking tip we learned.  When there was a dead on arrival expected in the ER, lay the morgue shroud down on the treatment table last to prevent struggling to get it under the patient later.

We also learned transfer techniques, bed to chair, chair to bed, and litter to bed. My favorite one person transfer technique was the "demon drop." For this, Mrs. Chase was pulled to the edge of the bed with the chair in alignment and pulled laterally until gravity dropped her into the chair. We devised another technique called the "guided missile" that really defies description, but was very effective. 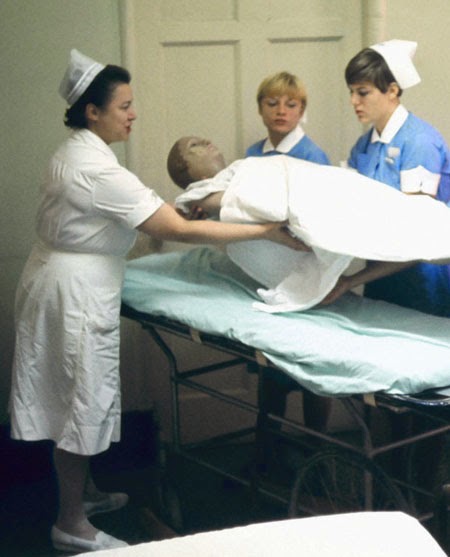 Nice illustration of Mrs. Chase elevating for a transfer. Look out below!

A nurse was so impressed with Mrs. Chase that she penned this poem found in an old nursing school yearbook:

In the classroom you've been our faithful guide
So your fame in nursing will ever abide
Your history is one we can no longer hide
For we're designed to spread it far and wide
Though we've bathed and pummeled you with treatments galore
And turned you until you must have been sore
You never spoke or an angry look you wore
As we practiced the nursing you made us adore.

You are dearly loved by all those in white
And students speak of you day and night.