How were blood pressure cuffs secured before Velcro?

Recently this question was posed on a forum. There were no answers. I recall the days before Velcro BP cuffs vividly. 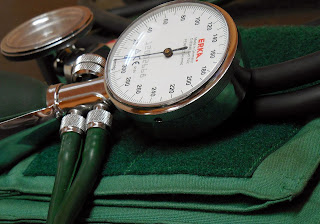 By my recollection Velcro BP cuffs appeared on the scene around 1970 or so. There were actually
alternatives to Velcro, but none really worked as well .  A Velcro substitute was the "triangular bandage." It could be rolled into a rope like device or folded and tied in any number of ways to secure things. In a pinch they could be fashioned into a BP cuff.  They were muslin and packaged in a blue box with the Red Cross symbol.

BP cuffs had 2 discrete components. The black rubber material bladder with inflation and monitoring tubes which could be easily removed from the securing device. The best type of securing device was a long 3 foot length of soft conforming blue silky material. It looked like a snake that had been run over by a truck and indeed had a tail. To take a pressure, the bladder of the cuff was centered over the brachial artery and the long snake-like thing wrapped 3 or 4 times around the arm and the tail tucked in to secure it. When you inflated the cuff it was similar to having a boa constrictor wrapped around your arm. It worked well.. The main disadvantage was the time it took to apply-much slower than Velcro.

The next method involved a flat metal perforated strap about 3/4 inch in width and the same length as the cuff. It was positioned at a right angle to the long section of the cuff which had raised metal rivets similar to a snap. The perforations on the metal strap snapped into the rivets to secure it. This type was just as fast as Velcro but sacrificed the infinite adjustability of Velcro. The rivets were about 1/2 in. apart and if an arm was between sizes, the cuff would be too loose or tight.

In pediatrics there were several fixed size cuffs available which again sacrificed the adjustability of Velcro. This also posed the nuisance factor of having available multiple sizes of cuffs which always seeme to get misplaced.

When Velcro cuffs made their debut they had detractors. Nurses thought they made too much noise when removed and would startle patients. Remember this is when street signs warned motorists that they were in a  quiet zone because of a hospital and SHHH! signs were plastered everywhere. Nurses also thought Velcro would not wear well.

I bet you whippersnapperns have never had the experience of applying a BP cuff around a patient's neck and inflating it. I know some of you may have been tempted, but hopefully, better judgment prevailed.

There was a bonafide  neuro test called the Queckenstedt Sign that called for this unusual nursing action. The patient was positioned laterally, the doc did the LP noting opening pressure and the the nurse carefully inflated the BP cuff that was positioned around the patients neck. Then the Doc did another pressure test. It was prudent to cease the cuff inflation before occluding the airway.

A normal Queckenstedt Sign showed an increase in intracranial pressure when the cuff pressure was applied to the neck. Compression of jugular veins caused vascular engorgement which caused increased ICP. A positive Queckenstedt occurred when there was no pressure increase with compression. It suggested spinal stenosis.  Thankfully current imaging technology has done away with this crude test.


Today is really special because it is Mother's Day and it's Nurses Week.  Mother's and nurses are both very special. Best wishes.
Posted by Oldfoolrn at 6:19 PM