What is the worst thing you have seen as a nurse? 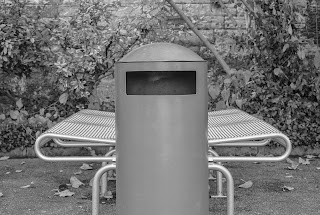 To deal with frigid Chicago winters, homeless people used to wrap their bodies in layers of newspapers. The colder the temperature, the more layers of  The Chicago Tribune. There was a technique to this, in order to be effective the paper was wrapped in layers of up to 30 pages thick. This served to insulate, but as a handy dandy shield against rain or snow there were Chicago Park District litter barrels. They were about 6 feet tall and had a dome on the top. The opening where trash was inserted was covered by a spring loaded door which served as a window of sorts. A makeshift  shelter could be made by tipping one of these containers horizontal and bracing it on the sides with rocks so it would not blow around in the wind.

One bitter Chicago night a huge mass of newspaper the diameter of a telephone pole came in stuffed inside one of the park district barrels . The police (there was no EMS back in the day) told us there might be a person in the center of this mass and they could not ascertain if they were dead or alive, then, cryptically added "Have fun."   Not a good sign. We quickly ascertained that there was indeed a person somewhere in the middle of this. We quickly removed the trashcan with the help of hot blankets (it had been frozen in place) and were immediately greeted with the most nostril searing pungent eye watering scent I have ever encountered. A combination of urine ammonia smell, stool, and who knows what else. So much for the notion that freezing quenches odors. Next on the agenda was to remove the newspaper. One of the docs suggested using a cast cutter and this worked for a few of the layers but the vibration only served to aerosolize the paper and the odor became disabling to the extent that seasoned nurses were taking breaks to run out into the hall for fresh air to prevent fainting. Someone suggested putting a trace of tincture of benzoin on the outside layer of our masks which did blunt some of the smell.

In the end better judgment prevailed and we removed the remaining paper. It was beginning to thaw and it was like peeling the skin from an onion. The odor worsened with each layer removed. The last layer of newsprint had permanently transferred the ink to the ladies skin. Her body heat had apparently initiated freeze-thaw cycles causing the ink transfer to bare skin on her arms and legs. Funnies on the legs and Sports on the arms.  It was one of the most sickening, sad sights I have ever witnessed. Reading the paper was never the same after this. Housekeeping sanitized the trash barrel and we repurposed it complete with the "KEEP CHICAGO CLEAN" sign on the side.

When the post mortem report came back, the conclusion was that she had frozen her kidneys after drinking-she had a toxic blood alcohol level. She had only been dead for about 12 hours before the police transported her.


The next poor soul was a young man that had cultivated the unfortunate habit of injecting drugs into the veins of his penis. I was on call in the OR and I should have known something was amiss when the telephone  operator told me to come in but "no hurry."  Usually it was a big rush when I got the call.

When I got dressed and reported to the OR  I was happy to see one of my favorite surgeons, nothing ruffled his feathers. He looked perplexed and muttered something about not being sure where to start. Finally he told me not to bother with our usual set-up of back table and mayo stand. We would start with the patient in lithotomy and he wanted just the small gyne table set up at a right angle to the patient with the  general surgery tray.

They brought the patient in, he was in obvious distress and when we moved him to the table he loudly  accused us of engaging in sexual activity with our relatives. This was one bad boy that I could not wait to be anesthetized. We broke down the table and put him up in Lithotomy position.

His penis was so necrotic that it was black. Inserting a Foley was pure guess work and took several attempts. The most repugnant site was his soccer ball size scrotum. It glistened like an ascetic abdomen and was purple in color. His perineum was totally obscured. The surgeon said "I guess we have to start somewhere" and the made a stab wound with a #11 blade in the scrotum. Projectile purulent goo with assorted small bits of necrotic tissue flew over my shoulder and landed on the suture cabinet behind me. It looked like a mixture of strawberry preserves and tapioca pudding. The pelvic floor was covered in grape - like pustules and it was very difficult to identify anything that resembled his anus. The surgeon hypothesized that once the penile veins were sclerosed, he began injecting the drugs into his perineum.

Incising and draining them produced a  smell that  was unlike anything any of us had encountered. It made our eyes burn and nostrils throb. The circulator thought that spraying some Elastoplast ( an adhesive for dressings that had a very string odor) would mask the smell. It worked minimally. The surgeon ordered a case of neomycin irrigant and we also put in a request for Airwick. There was nothing that could really quench the smell. The surgeon did an orchiectomy and excised most of the scrotum and then said we really needed to go in form above because the abscess had tracked into the peritoneum. He also determined that the patients rectum could not be saved and a colostomy had to be done.

We redraped and I went back to my favorite backtable-mayostand set up. The surgeon had to remove a lot of necrotic bowel. When he was done you could look down through the abdominal incision on top and see the OR floor through the big hole in his perineum. Chilling.

When this case was done we gave each other Zepharin showers and finished with a Phisohex bath .I could not get the smell out of my nose. The surgeon said very little after the case other than "That will take care of my sex life for awhile."  The operative report gave little indication of the ech factor in this case. I remember phrases like "copious irrigation" and "meticulously excised" but no mention of the stench. Remarkable restraint.

I asked the surgeon sometime later whatever happened to our foul friend and he replied, "He survived to inject drugs into his colostomy stoma." I assume or at least hope he was being facetious.

I took away from these situations a sense that even on rough days my life was really good. I never had to sleep wrapped up in newspaper. It is also really sad to see how much some people suffer
You really have to love nursing unconditionally as you would a child to deal with really bad situations. Nobody is going to do this for the money.

If any of you whippersnappers have been in similar situations, I would love to hear about them.