Robots Blowing Smoke in the Hospital

Smoking cigarettes in a hospital was widely accepted in the late 1960's and into the 70's. I don't recall any restrictions on in hospital smoking until the late 1980's when it began to be restricted to break areas. Nurses made special accommodations to facilitate smoking for their patients. If there was oxygen being used in a room where someone wanted to smoke, we moved the smoking patient to another room. Friendly, little old ladies who volunteered, pushed "gift" carts laden with cigarettes, candy, and magazines. The clickity-clack of the gift cart wheels going over expansion joints in the flooring was ironically identical to the noise made by the crash cart.

Cigarettes were also readily available from vending machines in the main hospital lobby for about 50 cents a pack. These machines always seemed to do a brisk business. 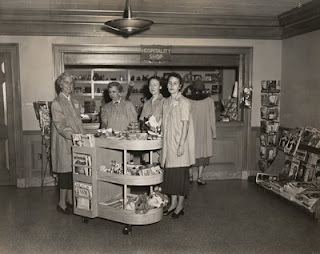 Care for a cigarette after that nebulizer treatment?

At the time, there was little attention directed toward preventive care and cigarettes were available to mitigate hospital induced stress. It did not really occur to people that cigarettes could induce disease or complicate just about every aspect of recovery.

For nurses,smoking was a good way to insure that you would be freed of nursing tasks for a few minutes. It was hard to irrigate a catheter with a cigarette in your hand. This may be hard to believe, but on a few rare occasions, I have seen ashtrays in use on med carts. It was very disconcerting to be leafing through the medication records and have a pile of ashes come cascading onto your white uniform.

Cigarette butts on the ward turned up in the oddest locations.  Setting up an orthopedic bed for traction was always a challenge because nurses patients used to stuff cigarette butts into the receptacles for the various cross members and supports. We used to have to dig them out with a scissors and attempt to identify the culprit from the brand of cigarette. A confrontation usually went like this: "Cathy, I had to dig 3 BelAir cigarette butts out of that bed frame before I could insert the traction supports." While dragging on an incriminating BelAir cigarette, Cathy would always reply: "I never smoke BelAirs."

Sometimes men would just drop their cigarette butts into a urinal because it was easily accessible on the bedrail. The old joke would be to attach a hand made sign stating: "Please don't drop cigarettes into your urinal. They get soggy and don't light."

When we were doing our psych rotation in nursing school, our instructors advised us that we should at least learn how to smoke so as to better relate to patients. Everyone, patients and staff smoked in psych. State hospitals supplied "indigent" cigarettes free of charge to anyone wanting them and Bugler roll your own smokes were always available when the rationed indigent cigarettes ran out.

If  you could not use your upper extremities there was always the handy dandy robot smoker available. Yes, in the days before robotic surgery we had robot smokers. It was the nurses job to load and light the robot. The cigarette was inserted into a round snug fitting receptacle on the base of the robot and a 2 1/2 foot length of tubing stretched from the bedside stand to the bed ridden patient. Patients liked the visual experience of watching the cigarette burn down, so it always had to be in view of the patient. These devices could be reused by multiple patients by simply changing the tubing. 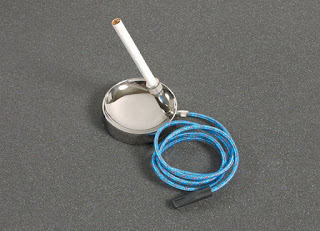 "Nurse, my robot needs a light!"

I actually cared for a paraplegic, Cecil, who insisted on dual robot smokers which always reminded me of smoke bellowing from a cars dual exhaust. He claimed that the robot smoker was not very efficient and that it took 2 of them to equal a normally  inhaled cigarette. We lined up two of the robot smokers in tandem (side by side) on his bedside stand, simultaneously lit them, and inserted the 2 black mouthpieces and he was ready to go. I always wondered what would happen if we used  a different cigarette brand in each robot. 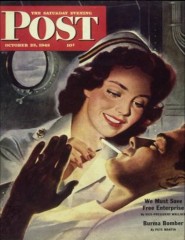 The nurse in this illustration should have been using a robot. We were never allowed to light a bedridden patients cigarette unless it was in a robot. The rationale being that if the patient was incapable of lighting it independently, he could not safely smoke it.

Today, I always find it depressing  to see the patients dressed only in their gowns outside smoking and marvel at how much times have changed. It's real progress that healthcare no longer promotes such a lethal practice as cigarette smoking.