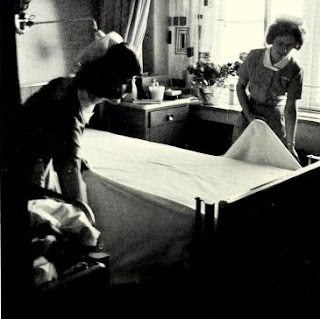 Making a proper bed was a complex issue with the potential for many serious pitfalls. The most senior and cranky instructors such as my favorite, Miss Bruiser, were put in charge of teaching probie student nurses the finer points of bed making. When there were few curative treatments for serious disease, little things like bed making assumed an exaggerated importance. Maybe you could not control a brittle diabetic, but Miss Bruiser could dominate and control a lowly student nurse.

The initial step was  to remove the existing linen with a minimum of movement to avoid airborne contamination. Never mind all those aerosolized pathogens being sprayed about the room by that portable suction machine, if you flap that linen around you are in for a bitter scolding by Miss Bruiser. Here is another vital tip: cover that pillow up by placing it under a sheet when you fluff it up or you will liberate more bacteria. Oh, and God forbid any of that dirty linen contact the floor or it might get contaminated.

If the patient was incontinental  (this is how Miss Bruiser pronounced incontinent) you had some judgments to make. If there was a small to moderate amount of stool, you could remove the stool from the patient, but don't make the mistake of wearing gloves. Gloves were very expensive and they distance and depersonalize the nurse in the eyes of the patient  as Miss Bruiser would explain during her bitter diatribe. If it was a massive Code Brown (I learned that term from you whippersnapperrns, very clever) then you must remove the patient from the effluent and wrap up the unholy mess of sheets and stool in a draw sheet and transport it to the dirty utility room.

We had a clever device located right next to the hopper in the dirty utility room called a sluice which separated the effluent from the linen. It was an inclined sheet of ribbed stainless steel which had a water source on the uphill end and a drain to the hopper on the downhill side. Very efficient, but the rinsing  ordeal process could overwhelm your senses. If a sheet was not properly sluiced, the offending ward would receive an unpleasant visit by a nursing supervisor. I don't know how they were able to trace the soiled sheet back to the offending ward, but it certainly did not take a blood hound to follow the odor of. stool infested sheets that had ripened in the heat of linen storage bags.
﻿﻿﻿﻿﻿


After the soiled ( that's putting it nicely) linen was removed, the actual bed making process could begin. An unoccupied bed was relatively straightforward. The linen included 2 flat sheets, a heavy muslin drawsheet and a cotton blanket. The bottom sheet was stretched tightly and tucked under at the top with a drawsheet centered in the middle. The top sheet finished it off. All corners were supposed to be mitered at exactly 45 degrees. Miss Bruiser would test the sheets for tightness by dropping her scissors handle first onto the bed. If they bounced up at least an inch all was OK. If the bed did not meet specifications, it was time to start from the beginning.

The next category was the surgical bed for the hopefully returning post-op patient. The first order of business was to crank the bed to maximum height to approximate the level of the gurney. The next step was critical and a mistake could lead to big trouble. You must determine which side of the bed the patient would enter and carefully fan fold the top sheet in the opposite direction so that it could be easily pulled to cover the patient using just one hand. Last minute adjustments of the top sheet would invite a bitter scolding from Miss Bruiser.

The typical occupied bed scenario involved rolling the patient to and fro from side to side while sliding the dirty sheets out of the way and replacing them with clean sheets. The really challenging occupied bed was one made vertically or from top to bottom when the patient could not be turned side to side. No turning  was common with hip and eye surgery patients. In the early 1970s total hip replacements were called Charnley Low Friction Arthroplastys and the patient was to remain flat on their back for 7 days to prevent dislocating the prosthesis.

The difficult part of this from a patient's view, was the fact that he must be elevated up toward the ceiling under his own power by pulling on a trapeze while the sheets were being slid into and out of position. If he could not lift himself, several burley students had to act as a human Hoyer lift while the sheets were being changed. For a proper linen change the patient was lifted 6-8 inches off the bed.

Miss Bruiser was an early adopter of coordinated care and viewed an elevated patients backsdide as a rare opportunity for a dorsogluteal intramuscular injection. Just about all parenteral medications were given IM and we rotated sites from deltoid to vastus lateralis to ventrogluteal. With a patient restricted to a no turn regimen, linen changes offered rare access to the dorsogluteal site. I used to think this was a cruel way to treat a patient struggling to lift himself up off the bed, but I knew better than to question Miss Bruiser. 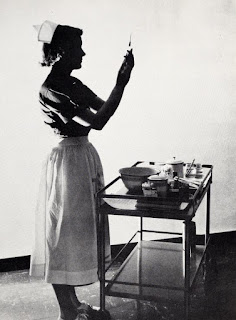 This student is reviewing Miss Bruiser's instruction on how to administer an IM injection in the dorsogluteal site while he is up in the air for a linen change. "Insert the needle straight up at a right angle to the  bed  and be sure to clear out of the way before he comes thundering down." At least the patient will have clean sheets to rest his throbbing backside on when all is done.

Bed making was really emphasized as one of the most important tasks a nurse could perform. I remember Miss Briuser telling us "the bed is where the patient lives while in the hospital." or "How would you like to lay in that bed ?" I think if I was supine on my back and Miss Bruiser and her students approached, I would resist having my bed linen changed to avoid that searing, throbbing pain of an antibiotic being rapidly injected in a vulnerable, exposed area.

Posted by Oldfoolrn at 7:01 PM