How do you cook a Thanksgiving turkey in an autoclave?

Sometimes a confluence of events come together  (How is that for some foolish double talk?)  and the end result is both unexpected and spectacular. We were on call Thanksgiving Day and just received a hot tip from the medical center  switchboard  operator. The hospital administration was giving out free turkeys as a good will offering to all on duty nurses. I suspect they had incorrectly estimated the low holiday census and were just trying to get rid of them.

Dr. Clobber, the on call anesthesia  resident ordered me to head on down to the hospital dietary department and collect on our free turkey. "Don't ever look a gift turkey in the beak," he replied with his typical smug, all-knowing  expression whenever he had an epiphany. "We're going to have turkey for dinner tonight!" Thanksgiving was usually a good holiday to be in the hospital for call as there was not as much surgical trauma  or  mayhem as say New Years Eve.  There were always 2 nurses and an anesthesia and surgical resident in the OR suite for call. If we were not busy, foolishness was frequently forthcoming if we were not busy.

Back in the day we did not have a lot of regulatory agencies breathing down our necks telling us do this or don't do that. I do not know how you whippersnapperns function with preceptors, infection controllers, nurse infomaniacs, and assorted clinical whiz kids breathing down your neck all the time. I could never be a nurse today. We had much more latitude with what we could get away with clinical practice back in the day. The point is, I doubt you could get away with foolishness like this today, so unless you have an old unused autoclave and some time away from regulatory snoopers, don't try it.

We had an old operating room that dated to the 1930's at the very end of the corridor. We never used it and it was more or less a museum (there was an actual observation deck) and it basically functioned as a store room. It did have a vintage functioning autoclave permanently built into the wall. This  steamy  hissing beast was one massive piece of equipment that was one of the more impressive products of the Industrial Revolution. The bankvault-like door was anchored by 8 massive spokes that reminded me of the configuration of a radial airplane engine with the giant wheel to open it, the propellor.

There were no electronics to control or monitor this hulking steam fired behemoth. You had to eyeball the pressure gauge to make sure it read "0" before cranking open the door with that massive wheel. There were no safety interlocks and if you wanted to be the first scrub nurse on the moon, just open that door up under full pressure. Look out Neal Armstrong here I come!

When I returned to the OR suite with my prized gobbler, Dr. Clobber  whipped out his ever present slide rule (no calculators) and asked me the weight of the turkey (about 9  kg.)  and some other data about the autoclave in the old OR room. We test fired the old autoclave and it fired right up with that impressive belch of steam. No bothersome preheating with this baby!  It worked like new. We just had to be careful to remember the correct autoclave door opening sequence. Our newer ones were all equipped with safety interlocks and modern safety devices like pressure relief valves.

After some frenzied slide rule calculations, Dr. Clobber said to fetch an instrument tray and place the turkey in the roaster instrument tray.  Next, proceed to the old  autoclave and run it for a 20 minute cycle. We tied the gobblers legs together with autoclave tape more or less out of force of habit.  We figured it would function as well as one of those pop-up gizmos. After the 20 minute cycle we popped the autoclave door open to the most delightful aroma of turkey I have ever experienced. Betty Crocker would have been impressed.  The turkey was moist and delightful and made for a most memorable on-call experience.

The only improvement to the cooking procedure would be to stuff  turkey's cavity with some ABD pads to prevent the bird from collapsing under all that pressure. It kind of resembled road kill after the autoclave pressure smashed the bird's thorax into it's spine. The squishing of the bird was only an aesthetic issue and it in no way impaired the delicious, tender meat that we all enjoyed. I don't know if  using actual bread stuffing would work with this cooking method, but we did not have any, so it's a moot point. I would be concerned  with the collapse of the bird, bread stuffing might get squirted out into the autoclave making a big mess.

They say imitation is the most sincere form of flattery and I was astounded during a recent outing to Kohls. There in the kitchen department was a Wolfgang Puck pressurized oven. They copied our autoclave cooking technique  cooking technique to a "T." Although much smaller in scale, the basic formula  looks to be the same.  Heat + pressure = delicious turkey.

In an upcoming post, I am going to investigate the feasibility of sterilizing a minor surgical instrument set-up in the Wolfgang Puck pressure oven. Just like our old autoclave, I suspect it could be a dual purpose machine. Just what the busy surgical center of the new millennium needs, sterilize instruments in the morning and cook your lunch between cases later on. 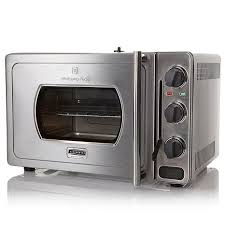 I am very thankful for all of you who indulge me in  these foolish ramblings. Happy Thanksgiving.  I know as I enjoy the holiday, I will reflect back on those old days when we autoclaved that turkey. It was an unexpected treat and really was delicious.

Posted by Oldfoolrn at 5:29 PM